Home Features WWHDD: What Would His Disciples Do? 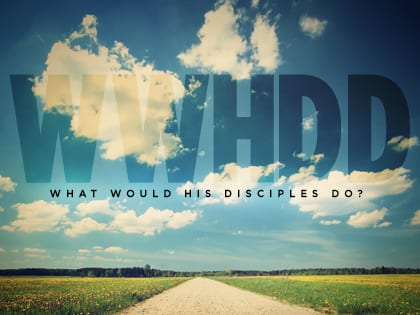 Dan Kimball: “A disciple of Jesus should be just as passionate as his first disciples.”

“The world has changed. The word ‘disciple’ is in the air; I can feel it in the water, I can feel it in the earth.” That’s a little twist from Galadriel’s well-known line in The Lord of the Rings. The word disciple truly is in the air today. The church has been paying attention to discipleship again—you see it as a focus in conferences and several recent popular books.

Yet, one thing I hope is not lost in this fresh attention is a major focus on what a disciple is and how they spend their time and prayers.

When Jesus first came on the scene, he called Andrew, Peter and the rest to follow him. He wasn’t calling them into an inward-focused mission but one that would be active, out making new disciples. Jesus’ last words before he ascended to heaven recorded in Matthew 28 and in Acts 1 both include a charge to tell others about Jesus.

WDHDD: What Did His Disciples Do?

If I want to learn about those who spent three years with Jesus and learned from him and saw him die and rise again—what did they then do? How did they spend their time?—I can turn to the Book of Acts. There we get glimpses into the actions of Jesus’ actual disciples, not just contemporary church leaders who say, here’s what a disciple does.

And what we see as we read is an extreme passion for evangelism. We see the disciples immediately going out with a passion to proclaim the news about the risen Jesus. It was not just leaving tracts on car windshields. They were traveling, they were in conflict often and they were arrested for it. From what tradition tells us, many of them died for it.

I am not suggesting we take the evangelistic methods of the first century and go out street witnessing as our primary method. But I am suggesting that a disciple of Jesus should be just as passionate as his first disciples, thinking about those who don’t know Jesus yet and doing whatever possible to see them come to learn about him.

Younger generations may not understand this. Years ago, the church rightfully needed an adjustment from conversion-focused, often guilt-oriented confrontational evangelism as the way to do things. Now, many see justice and compassion projects as the primary forms of outreach.

Yet, in Acts you don’t see this. Of course they care for the needy and poor. But what you see all the time is their zeal for others to hear about Jesus.

So as we think about discipleship and what a disciple is, we may need some more old school evangelism emphasis in the mix. I have talked to many young leaders who have evangelism about 10th on the list of what it means to be a disciple. I don’t blame them, because of that old hit-and-run conversion approach. But as time passes, perhaps we need to refocus on how a disciple’s primary understanding of what it means to follow Jesus includes a passion to see others know him—with both word and deed. We have a lot of deed, but I think we need to bring in some more word—it is through words we hear about resurrection, repentance, forgiveness and salvation.