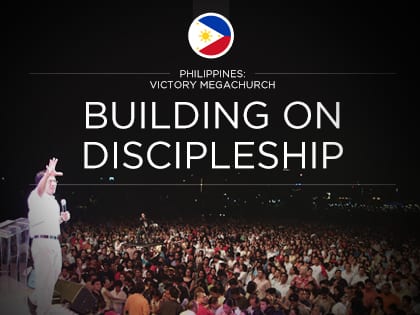 “Our focus is on reaching the lost—not growing the church,” the founder says

On a typical Sunday, Victory Metro Manila draws some 80,000 worshippers across 15 congregations, all with multiple services and locations, and many offering more than one language. Each location has multiple preachers.

Ferdie Cabiling, age 49, oversees all those multisite pastors. A gifted evangelist, Ferdie became a Christian through Victory. He was an 18-year-old university student planning to be an engineer.

Ferdie’s journey of discipleship and empowerment—from new convert to senior leader—symbolizes why the Victory churches have spread so steadily since its founding, heavily fueled by conversion growth. Victory started in Manila and has expanded to a current total exceeding 65 cities across the Philippines. Plus, as a founding member of Every Nation Churches and Ministries, they’ve sent outreach or church planting teams literally across the world.

“We Were Trained to Lead the Church”

Victory was started by Steve and Deborah Murrell, self-described “accidental missionaries.” Steve, his newlywed wife Deborah, and 65 American university students came to the Philippines in 1984 on a one-month summer mission trip. Their focus was to do evangelism in Manila’s University Belt area. The goal of the American team was for every missioner to train at least one Filipino counterpart to continue the work of sharing the gospel. As high schoolers and collegiates responded, a student church quickly emerged, filled with new believers. So the Murrells stayed another month, then another, then another—and, eventually, for more than two decades.

Ferdie was one of the first converts. “I was saved and baptized and started meeting one-on-one with one of the American students, then with Steve, and in a class with other new believers,” Ferdie says. “We were trained to lead the church.” Indeed, a year after being saved, Ferdie preached his first sermon.

Steve explains: “Because we saw ourselves as temporary missionaries, we knew we had to quickly train Filipinos in basic ministry skills. In just a matter of weeks the new converts would be the ones to pray with others to receive Christ, explain water baptism, pray for them to be filled with the Holy Spirit and take them through basic spiritual foundations.”

From Outreach Magazine  What Is Your Nineveh?

This approach required a lot of faith on everyone’s part. “As long as you’re one chapter ahead, you can lead others,” Steve would tell the young church. Two years after starting, the church went multisite, becoming one church in multiple locations. Their structure was simple: they did training and ministry through small groups. “As we did life in small groups, we created even more leaders through small group discipleship,” Steve says.

Steve also tried to convey a sense of empowerment through statements like, “Now that you’re saved, you can change the world. You don’t have to wait for another class.”

Ferdie grew spiritually by being mentored through one new responsibility after another. “When I came to Christ, they loved me, believed in me, prayed with me and gave me feedback all the time,” he says. At one point he told Steve, “I believe I’m called to be a preacher.” Soon enough he learned that he was also an evangelist.

By age 31 Ferdie prepared to plant a new congregation in two months’ time. “Why don’t you pastor this congregation?” Steve asked Ferdie. It wasn’t just that Ferdie had showed spiritual maturity; he also had learned how to develop others. “We pay pastors to equip, not to do ministry,” Steve says.

Steve continued to challenge everyone to keep reaching out. “Our focus is reaching the lost, not growing the church,” he says. In the early days, as people would come from other churches to learn what was happening at Victory, “we would say, ‘If you’re a Christian from another church, go back and be a blessing there; we’re here to reach the lost,’” he explains.

At the same time, the large response was not their most important metric. “The number who show up doesn’t mean anything without the touch points of discipleship,” Steve says. Their primary measures are what they call the four E’s of discipleship: engaging culture and community, establishing biblical foundations, equipping believers to minister and empowering disciples to make disciples. As of 2015 that’s translated into just over 10,000 people leading small discipleship groups each week in Metro Manila alone.

From Outreach Magazine  How Do You Define Excellence?

People who visit Victory or hear stories from the church comment to Steve that they might see the same results at their own churches if they had leaders like Ferdie. “He didn’t look like this when we started and I first met him,” Steve quickly says with a smile.

“Because We Build Around Discipleship, We Can Afford a Bad Sunday”

No one in Victory’s leadership likes having a bad worship service. But they value training new leaders, deciding it’s more important to train a leader even if that means an occasional bad service. “Because we build around discipleship, we can afford a bad Sunday,” Steve says. This perspective comes from his original approach of “I’m here temporarily, so I need to build leaders.”

Steve and Deborah now split their time between Nashville and Manila, playing an apostolic role in Victory’s leadership, and still conveying great dreams for Victory’s ongoing outreach. “I’m not a goal setter,” Steve says, “but God does something in my heart anytime I look at the teeming masses. As long as there’s one lost soul out there, we’re not big enough.”

Ferdie also embodies that attitude. “I still hear Steve’s voice saying, ‘Ferdie, you do it.’ That big heart for outreach and discipleship in small groups is simply part of our culture.”