Home Resources Even if They Don’t Go to Church, People Love VBS 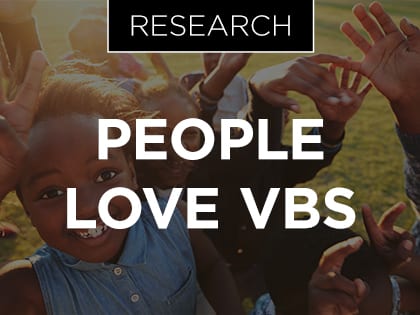 From it’s outset, VBS has been popular for kids and parents alike. Here’s the proof.

Back in the 1890s, a pair of Sunday school teachers—D.T. Miles of Hopedale, Illinois, and Virginia Hawes of New York City—both had the same idea.

School kids were off for the summer.

Why not invite them to church to study the Bible? And maybe sing a few songs and have some fun along the way?

The idea was a hit.

Today, vacation Bible school—better known as VBS—remains one of the most popular church programs in America.

Six in 10 Americans say they went to VBS growing up. Two-thirds of American parents say they plan to send kids to VBS this summer—even if they skip church themselves.

And almost everyone involved had a great time, according to a new survey from Nashville-based LifeWay Research.

“Each week of the summer there are thousands of VBS programs going on around America,” said Scott McConnell, executive director of LifeWay Research.

“It’s one of the things that people love about church.”

LifeWay Research surveyed 1,200 American adults about their experience with VBS.

Twenty-two percent say they went every summer growing up, while 14 percent said they went most summers. Another 13 percent went occasionally. Five percent went more than once. Forty percent never went.

One in 6 (17 percent) remember making a spiritual commitment at VBS. Most (88 percent) say VBS helped them better understand the Bible. That includes two-thirds who either completely (37 percent) or mostly agree (26 percent). Twelve percent disagree.

From Outreach Magazine  3 Characteristics for Translating Across Differences

Five percent say their family went to a church that offered VBS—but they weren’t interested in going.

More than half (61 percent) of American adults who did not go to VBS agree they still have some positive thoughts about the program. That includes 28 percent who completely (14 percent) or mostly agree (14 percent). Thirty-three percent slightly agree. Thirty-nine percent disagree.

A majority of Americans (57 percent) who did not go to VBS also believe the program could have helped them better understand the Bible—at least a little. Forty-three percent disagree.

About half (52 percent) agree the program could have impacted their spiritual growth. Forty-eight percent disagree.

The survey’s results are a great reminder of why VBS matters, said Jana Magruder, director of LifeWay Kids.

“It’s a strong affirmation of the work that churches put into VBS programs,” said Magruder. “I hope churches are encouraged by this research to continue to host VBS for their communities.”

About half (47 percent) of parents with kids under 19 say their child has been to VBS.

The most common reasons: The family attended the church where the program was held (38 percent) or the parents were also taking part in VBS (33 percent). Twenty-nine percent say they valued their child’s spiritual growth. Twenty-seven percent valued studying the Bible.

A quarter (26 percent) say their child went to VBS because someone—other than family—invited them.

From Outreach Magazine  Moving Your People to the ‘Upper Room’

Among the reasons parents didn’t send kids to VBS: The family didn’t go to church (29 percent), the family was too busy (14 percent) or the child was too busy (13 percent).

Still, parents who didn’t send their kids to VBS have a positive view of the program (83 percent) and say it would have helped their child better understand the Bible (69 percent) or grow spiritually (71 percent).

And this summer, vacation Bible schools may be packed again, according to LifeWay Research.

Two-thirds of parents (64 percent) say their child is likely to go to VBS this year—including about half who completely (29 percent) or mostly (18 percent) agree. A third (36 percent) disagree.

More than half (58 percent) say their child may go to more than one VBS. Forty-two percent disagree.

“Two-thirds of American parents are eager to send their children to a church activity where they will have fun experiences centered on what churches care about most: Bible stories, the gospel and worship,” said Magruder.

Many parents say they’ll send their kids to VBS even if it’s held at someone else’s church. Sixty percent say they will encourage their child to attend a VBS program at a church where the parent does not attend services.

More parents will encourage their child to attend VBS at another church if they get invited by a friend (69 percent).

“People still believe vacation Bible school is good for kids,” McConnell said. “Even parents who don’t go to church want their kids to go to VBS.”