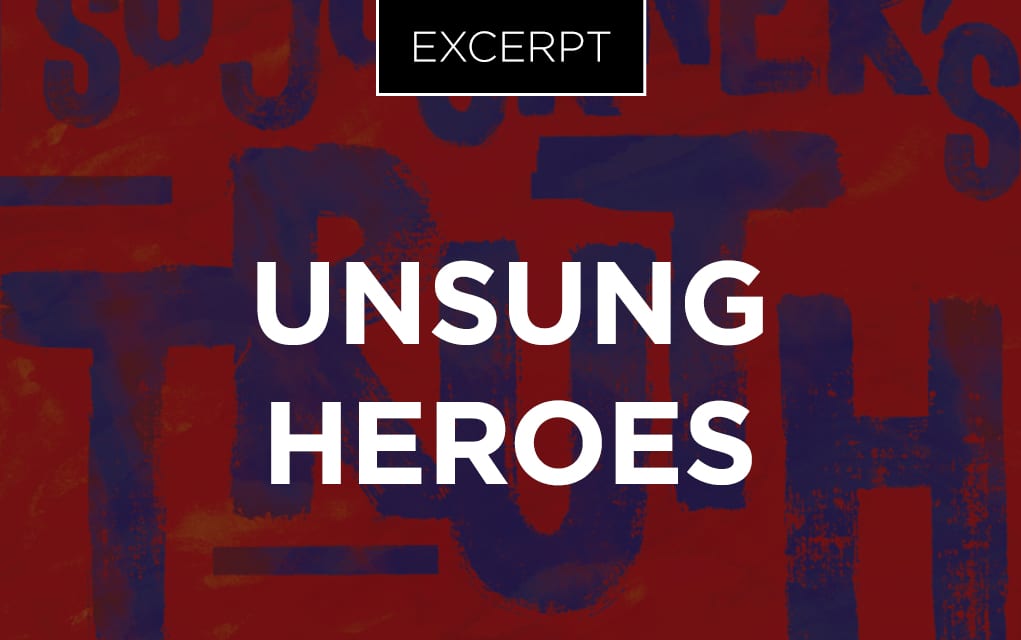 When my mother died, there were many strong women who stepped up to support me throughout my life.

Taken From
A Sojourner’s Truth
By Natasha Sistrunk Robinson

She gently touched my shoulder, then took my hand to lift me from the brown folding chair under the funeral-home tent. My eyes had been fixed on the steel silver bars as I watched strangers lower my mother’s body into the ground. My Aunt Janet said to me, “Come on inside the church, Tasha. There are some things you just don’t need to see.”

I don’t remember eating the meal provided at the church that day. I don’t remember what I did before or after the service. I don’t remember whether I wore my midshipman service dress blue uniform or a traditional black dress—it wasn’t exactly a day for taking pictures. I do remember entering the old Baptist church, filled with family and friends, as songs of praise rang out from a full choir loft where my mother used to sing. Those black people, my mother’s friends, stomped, rocked and clapped their hands as they sang praises to Jesus. As I walked down the aisle, I worried about my immediate family: How would we make it without my mother? Who would love and lead us now?

My high school principal was one of the officials who carried the ceremonial flowers to the small gravesite outside, and she was allowed to sit in the front of the church until it was time to perform her duty. She called me several days later and said, “You know, Tasha, I watched you that whole service, and the only time you cried was when you looked at your immediate family. Somehow, you knew you were going to be alright because your mother gave you enough love to last a lifetime.”

The truth was, I first experienced God’s grace to me through the love and sacrifices of my dear mother.

I was sad and lonely. I poured myself into work. For years I bottled my emotions and did not sufficiently grieve. But when I thought I would emotionally die, God was gracious. He sustained my life by bringing other women who continued to show up when I needed motherly support.

When I returned to the Naval Academy and resumed college life, it was my mentor, Mary Thompson, who provided a haven for prayer, home-cooked meals and a safe place for my many tears. When I graduated, it was my godmother, Mrs. Joyce Garrett, and her husband, Pop, who threw my best friend and me a graduation party because our lives, our accomplishments and our new careers in the military were worth celebrating.

When I got married, it was my other godmother, Sister Linda Jones, who managed the wedding. I was not anxious because she was running the show. When my bridesmaids left my hotel room to head to the church, two of their mothers remained to help me get dressed and drive me to the church on that bright spring day. As my dear friends were preparing to stand as my witnesses, their mothers were taking care of me. I didn’t ask them to do that; they just showed up. On that day there were no tears of sadness because I did not have my one and only mother. God in his grace had given me three.

One of Jesus’ best friends, the apostle John, wrote of him, “From his fullness we have all received, grace upon grace” (John 1:16). This truth I know full well.

God’s grace sustains us through our beginnings and endings. Losing my mom when I was twenty felt like the end of being a daughter and the beginning of being a mother to my younger siblings—my sister and brother. I grew up very quickly in the four and a half years between my mom’s funeral and my wedding. I became more responsible for myself—and for my father and siblings as well. There is a weightiness to becoming a matriarch. So, I learned to fully embrace that I am a strong woman and a leader.

I don’t wear the “strong woman” title as a badge of honor, as if I had a blue leotard with a Superwoman emblem on my chest and a red cape flying in the wind—not anymore, anyway. I used to be the StrongBlackWoman that Chanequa Walker-Barnes describes:

“[She] is the woman who constantly extends herself on behalf of others. In her intimate and family relationships, on her job and in her church and community, she is the “go to” woman, the one upon whom others depend when they need assistance, counsel or comfort. Driven by a deeply ingrained desire to be seen as helpful and caring, she is practically incapable of saying no to others’ requests without experiencing feelings of guilt and worthlessness. As her willingness to help repeatedly reinforces others’ tendencies to ask her for help, her very nature becomes defined by multitasking and over-commitment.”

I still multitask, but I have learned to say no by establishing boundaries, setting aside the responsibilities that do not belong to me, and asking for help.

I have also learned that strong is not always the opposite of weak. Strong is knowing your own power and exercising it humbly. In his book Strong and Weak, Andy Crouch writes, “What we truly admire in human beings is not authority alone or vulnerability alone—we seek both together.” Being a strong black woman is knowing quite deeply that the two—strength and weakness, authority and vulnerability—can coexist. This knowing is often born out of much suffering and sorrow.

Strong is knowing your own power and exercising it humbly.