Home Resources Books Why We Must Keep the Gospel Central 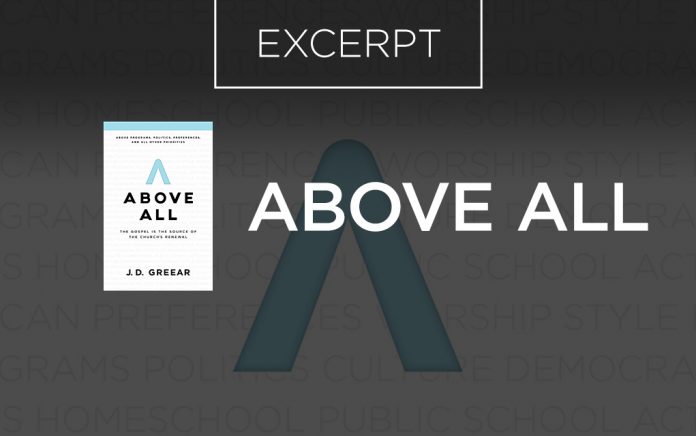 Our power doesn’t lie in the techniques we employ, but in the truth of our crucified, risen Savior.

Excerpted From
Above All
By J.D. Greear

At least that’s what society wants you to believe.

Churches are closing their doors. Evangelicals are leaving the faith. The tide of those who identify as “no religion” is rising.

Is the handwriting on the wall? Is the Christian movement done? Must Christians rethink their convictions?

It seems change is the only option.

We can’t hope to reach the next generation with our Bible-thumping, worn-out doctrines of sin, the exclusivity of Christ, and our “archaic” notions of marriage and sexuality, we’re told.

And looking around, it seems a lot of Christians have gotten the message. Many have given up trying to maintain their historical Christian convictions.

Does God really believe that about marriage?

Is the Bible really believable?

Is church really all that important?

For those who haven’t given up on their beliefs, they’ve relegated their lives into the shadows. Hunkered down. Quarantined. Protected. Fighting to keep themselves and their children free from the infection of “the culture” that lurks about. They’re no longer praying that Christ would use them to turn their worlds upside down like Peter did in those golden days of optimism. Not a chance. Peter didn’t have to deal with the secular media. Or Hollywood. Or the LGBT agenda.

Instead, they’re praying that Christ would return within the hour and save them from the evil around them so that their troubles would be left behind. They might not get out much and engage with their neighbors in need of saving, but they will for sure mobilize to get to the voting booths. That’s our last stand.

Go into these churches and ask the faithful attenders how a person can be saved and you will likely get a biblically reliable answer. They know the Sunday School answer is Jesus. Ask them to explain the gospel and they’ll likely be two for two. This makes things interesting, because I believe what the church—you and me—needs most in our present time is a recovery of the gospel.

But how will the recovery of something we already know take us to places we’ve never been? After all, isn’t the proverbial definition of insanity doing the same things over and over again and expecting different results? For this reason, we’re tempted to think we need something new. We need something to change. We need a different method.

Isn’t the real issue that we haven’t mastered the new media of our hyper-technological age? Or that we need to update our politics to fit the 21st century?

Maybe it’s a leadership crisis. After all, everything rises and falls on leadership! If seminaries would just train pastors to be better leaders, to staff to their weaknesses, to get more in touch with culture, and to understand and utilize their enneagram number, our churches would grow again. Right?

But with what type of growth?

All of these issues are important and deserve discussion, of course. But I contend that what we really need isn’t anything new.

Jesus said his gospel—the events of God the Son coming to earth, living the life that we were supposed to live, dying the death that we were condemned to die, and rising from the dead to defeat sin and death and offer humanity a way to God through his sacrifice—contained such power that not even the gates of hell would be able to resist its advance.

Think about this: The gospel is the one thing in the New Testament, other than Jesus himself, that is referred to directly as the power of God.

Not contains the power of God.

Not channels the power of God.

The gospel is itself the raw, unstoppable, death-defeating power of God.

The apostle Paul explains in his letter to the Romans that the gospel is the power of God unto salvation for all who would believe (Rom. 1:16). The gospel is God’s power to create, to redeem, to heal, to bring back from the dead. It doesn’t offer insights on a new or superior technique. It is raw, explosive power. And it’s to that power that the church must return.

Read more about Above All in our interview with J.D. Greear.