Home Resources Books Face-to-Face With the God of Secularism 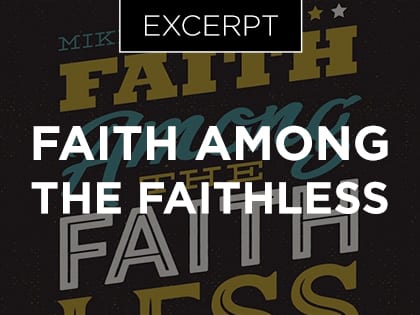 In our culture ruled by secularism, we must necessarily rethink the way we engage as effective followers of Christ.

Excerpted From
Faith Among the Faithless
By Mike Cosper

THE ONE GOD THAT MATTERS TODAY

Secularism is today’s incontestable god. It’s the one that oversees the way the other gods function in our society. Because while it hasn’t erased religion or spirituality, it has created a backdrop that leaves it always secondary. The bedrock ideas of our world say that all that exists is what can be seen, touched, tasted, smelled and comprehended through ordinary means. So, for instance, secularism denies real transcendence. It might allow for the possibility of the experience of transcendence, but it must explain it via these material causes: What we call transcendence or religious experience is actually some combination of good hormones and happy neurons in the brain. It has some evolutionary cause—some root in the need to advance and preserve our species that has been written into our DNA.

Secularists can tolerate religion as long as it doesn’t make claims on anyone else’s happiness or welfare—that is, as long as it doesn’t purport to be an all-inclusive picture of the good life. So, when religion or spirituality are mostly self-serving, when it doesn’t make demands of anyone but its acolytes, secularism leaves room for it. “Do your transcendental meditation retreat. Eat your Tofurky,” it says. “Just don’t try to assign any big, overarching meaning to them. Don’t let them frame up the whole world. Don’t let your beliefs cast aspersion on your neighbors, and most of all, don’t let them compete with me.”

In Persia, Babylon and Rome, people who didn’t buy into pluralism ran into trouble. They found themselves oppressed or isolated or trampled by Xerxes’ elephants. Something similar is happening to Christians today.

To stretch the metaphor, let’s imagine that a group that had been deliberately picking fights with Xerxes, outlawing Xerxes-related paraphernalia in their towns and villages and refusing to do business with Persians, conducted some raids along the Christian/Persian border. Their resistance might have worked for a while. They might have won a few battles with Persian troops, and they may have even thought they’d won self-rule back. But the reach of the empire and the momentum of its growth were too great. Eventually, they would have to either assimilate, shrink into ghettos or perish.

For a long time, Christians were gleeful combatants in the culture wars. They occupied a place of power. They saw that power beginning to shift in the aftermath of the 1960s and ’70s, and they thought they could legislate and enforce a hard line against it. But eventually, they lost, and their opponents turned their tactics against them. Which is where we are now. There’s a big, decadent, secularist feast going on.

What Christians underestimated, or perhaps simply didn’t see coming, was how much momentum secularism had, and how powerfully it would impact the human imagination. Secularism tells us that the universe is comprehensible, and that’s a dazzling thought. All mysteries have solutions. Copernicus showed us how the stars moved, and that we weren’t in the center of them. Darwin showed us how humanity came into being. Freud said that the voice in your head wasn’t an evil spirit; it was your mother.

These ideas and others layered on top of one another, eventually untethering the world from any thoughts about God, and with them, any ideas about real authority. Secularism unleashes humanity to a life of (supposed) autonomous human freedom, freeing it to seek out pleasure and happiness wherever they’re found, freeing it from the burden of arbitrary laws from an angry, bearded giant in the sky.

From Outreach Magazine  What Different ‘Church Streamers’ Are Looking For

In this reframed world, even nature loses any real sense of authority. What we might call “interventions” into nature become commonplace, whether we’re talking about splitting the atom, enhancing breasts or calling a biological male a woman.

I don’t mean to draw an equivalence among these things, only to point out that in each case, something happens that is wholly unnatural. In a world without God or without authority, we have few resources for thinking about and judging the merits of any of these. They each come down to—at best—a question of “the good of the many” and “the good of the few.” Culture, as a whole, has reasoned that a host of things are acceptable paths to happiness, from gay marriage to polyamory and more. Who are you to object to someone else’s chosen path?

Taken from Faith Among the Faithless: Learning from Esther How to Live in a World Gone Mad by Mike Cosper. Copyright © 2018 by Mike Cosper. Used by permission of Thomas Nelson. FaithAmongtheFaithless.com.