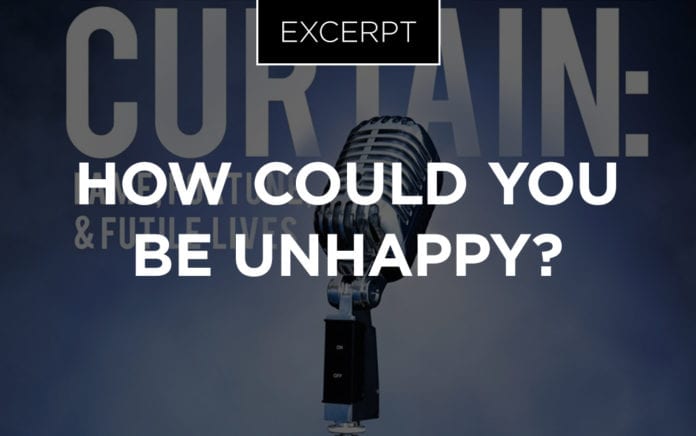 Robin Williams struggled with depression and alcoholism, but there was a deeper struggle.

Excerpted From
The Final Curtain
By Ray Comfort

On August 11, 2014, Robin Williams committed suicide at his home in Paradise Cay, California, at the age of 63, after battling depression for many years. Shortly after his suicide, Time magazine published an article titled “Robin Williams’ Depression Struggles May Go Back Decades.”

“According to the local sheriff’s office, coroners believe Williams may have committed suicide by asphyxia, and the actor’s representative said he had been ‘battling severe depression of late.’

“While the representative did not elaborate on the potential source of his recent depression, one-third of people with major depression also struggle with alcoholism, and Williams admitted to abusing both cocaine and alcohol during the height of his popularity in the 1970s as alien Mork on Mork & Mindy, which showcased his manic improvisational style.”

In an interview with the Guardian, Williams said that while he was working in Alaska in 2003, he felt “alone and afraid” and turned to alcohol believing it would help. Time added, “Studies suggest that alcoholism and depression may feed each other. People who are depressed are more vulnerable to abusing alcohol than those who don’t experience depressive episodes, and those who drink heavily are also more likely to experience depression. The latest evidence also hints that the same genes may be responsible for both conditions, and depression is a strong risk factor for suicide. About 90 percent of people who take their own lives are diagnosed with depression or other mental disorders.”

In September of 2010, Williams spoke to the Guardian about his drinking problem: “I was in a small town where it’s not the edge of the world, but you can see it from there, and then I thought: drinking. I just thought, hey, maybe drinking will help. Because I felt alone and afraid. It was that thing of working so much … maybe that will help. And it was the worst thing in the world.” What did he feel like when he had his first drink? “You feel warm and kind of wonderful. And then the next thing you know, it’s a problem, and you’re isolated.”

Then he became candid (but was unable to be specific) about the fear that continually tormented him: Some have suggested it was Reeve’s death that turned him back to drink. “No,” he says quietly, “it’s more selfish than that. It’s just literally being afraid. And you think, oh, this will ease the fear. And it doesn’t.” What was he afraid of? “Everything. It’s just a general all-round arggghhh. It’s fearfulness and anxiety.”

A Conversation With Robin Williams

As I read your words, I didn’t have to try and imagine that feeling of being alone and afraid. I know what it means to be tormented by fear. I was in the middle of the North Island of New Zealand back in the early 1980s. I had spoken at a church in the morning and was the guest at a farmhouse, in a back bedroom, passing the time until the evening meeting. I will never forget what happened. As a small child I would have reoccurring nightmares where I felt as though my fingers were swelling. It sounds strange now to think that the dream terrified me, but it was so fearful I would end up regularly beside my parents’ bed, with them dousing me with water to try and snap me out of the feeling of terror. My mom told me that my grandfather spoke of the same dream plaguing him as a child.

From Outreach Magazine  Practicing Hospitality Is a Key to Understanding

As I stood in the farmhouse bedroom, it was as though a thousand demons suddenly invaded my mind, filling me with the same terrible dread I had in those nightmares. But I wasn’t asleep. I was wide awake. I couldn’t wake up, and there were no parents to comfort me. I threw myself to the floor and pleaded with God to help me.

The experience was devastating. I was a Christian who trusted God with all of my heart, yet this was happening.

When I arrived back home and tried to explain to Sue what had happened, I broke down in tears. It was too hard to relate. It was completely irrational.

The experience was so devastating I couldn’t have a meal with my family for over a year. It was too traumatic for me to face my wife and children. Yet, I had to continue to travel and speak at churches and conventions.

I had what I now know to be “agoraphobia,” commonly called panic attacks. Again, these were irrational. They had no explanation. I would lie in bed and feel my heart beating within my chest. I was so filled with a reasonless fear that I didn’t even want to get out of bed. It took me about five years to rid myself of that paralyzing terror. So, in a small way, I can empathize with you.

I know that you believe in the existence of God and that you were raised in the Episcopalian faith by your dad. I know this because in one of your stand-up routines you joked, “I’m an Episcopal; that’s Catholic Lite. Same religion, half the guilt!” And then when you were 56, you checked yourself into a rehabilitation clinic, and after you came out you said, “You get a real strong sense of God when you go through rehab.”

But often in rehab clinics, God is offered as a means of help in life, as a kind of heavenly buddy. And so, understandably, those with addictions come for help with their addiction problem. The result is that they are able to remove the web, but the spider remains. The symptom is addressed, but the cause remains. Many who come through that door often experience a false conversion to Christianity.

While secular society points to the symptoms, blaming circumstances, genes or mental issues, the Bible—the ultimate human instruction book, gives insight into who we are and why we react as we do. It says that we are sinners who are guilty before a holy Creator, and even though you may joke about being Episcopalian and halving the guilt, sin is deadly serious in his eyes. The Scriptures say that it is so serious, it pays our wages in death (see Rom. 6:23). So we must forget the web and instead go for the spider. It’s then that your newfound gift of faith will drive out those deep-rooted fears.

The only way you could describe what you thought was an irrational fear was to say that it was caused by “Everything. It’s just a general all-round arggghhh. It’s fearfulness and anxiety.” In his book It’s Kind of a Funny Story, Ned Vizzini asks, “So why am I depressed? That’s the million-dollar question, baby, the Tootsie Roll question; not even the owl knows the answer to that one. I don’t know either.”

Once again, here is the answer to that “million-dollar question,” from Hebrews 2:14–15 in the Living Bible (a modern paraphrase):

When, as mortals, we don’t know the answer to some difficult question, we often flippantly say, “God only knows.” It is, however, the truth. God is omniscient. He knows. And here in His Word, he tells us why every human being is plagued with an unshakeable dread. The Great Physician gives us the diagnosis and the cure.

No Need for Guilt

In looking back at your past, I see that you weren’t just a friend of Christopher Reeve, you were like brothers: “Reeve’s widow Dana once described the pair as being ‘closer than brothers,’ and it was rumored that Williams had helped pay for Reeve’s treatment following his accident. He also became actively involved in Reeve’s foundation, The Christopher Reeve Paralysis Foundation.”

How could his accident and consequent death not affect you for a lifetime? Add to that tragedy the death of his wife from lung cancer, and for you there was no consolation. It was such a hopeless and dead end. You had nothing to help you control your depressing thoughts. But your words about his dying revealed something deeper than mourning over the death of a close friend. Your answer to the question of whether or not his dying made you feel “alone and afraid” is very telling. You answered “No,” and added, “it’s more selfish than that. It’s just literally being afraid. And you think, oh, this will ease the fear.”

What did you mean by “It’s more selfish than that”? Perhaps there was a feeling of guilt because it wasn’t his death that was creating your fear. How could it? He had already passed. It was rather the reality of your own death that made you afraid. But that’s nothing to feel guilty about. It’s not selfish. It’s okay to fear death. It’s a God-given instinct to want to live.