Home Books Apologetics C.S. Lewis and the Rhetoric of Goodwill 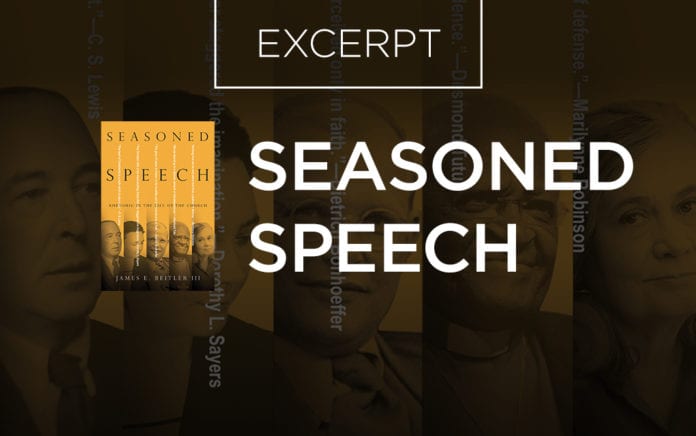 “The Psalms” is one essay in which Lewis writes as a John the Baptist-like figure and weaves together several Advent themes, including the exaltation of the humble, the promise of judgment and the call to repentance. In the relevant section of the essay, Lewis unpacks Psalm 109, praising its final verse because it sides with the lowly and in doing so “anticipates the character of the Magnificat”—another of the Advent season’s primary readings.

Lewis goes on to note that the psalm’s conclusion “will commend itself even to a modern unbeliever of good will; he may call it wishful thinking, but he will respect the wish.” So far, so good. But then Lewis highlights a problem. The remainder of the psalm is a song of pure hatred. “What good can we find in reading such stuff?” he asks, seemingly rhetorically. Instead of leaving it at that, though, Lewis answers his own question. While the Psalms are indeed filled with startling expressions of hatred, they also convey a profound longing for things being put to rights, a message which, Lewis claims, is purified by God and eventually transformed into Mary’s song.

In a characteristically compelling passage, he writes, “There is … mixed with the hatred in the psalmists, a spark which should be fanned, not trodden out. That spark God saw and fanned, till it burns clear in the Magnificat. The cry for ‘judgement’ was to be heard.” Lewis then warns that this judgment may ultimately be directed at us, inviting us to examine the ways we have harmed others. As he so often does, Lewis turns our judgments back on us. Instead of judging Scripture, we are judged by it—and we stand in need of repentance. This Advent-appropriate message hinges on goodwill: Lewis highlights the psalmist’s goodwill and models goodwill through his response to the psalmist’s words.

From Outreach Magazine  Erwin McManus: The Way of the Warrior

A final connection between Lewis’ rhetoric of goodwill and Advent is his emphasis on joy. The communities of goodwill that Lewis cultivated were certainly sources of joy for their participants, and—as others have noted—Lewis’ writings were composed in ways that kindle joy and delight in readers. Such joy, at least according to Lewis’ own descriptions of it, is a thoroughly Advent-like notion. He presents it as an incredibly strong (and even painful) “longing” that cannot be satisfied on this side of glory.

As a young boy, Lewis experienced the longing when he encountered his brother’s toy garden, Beatrix Potter’s story Squirrel Nutkin, and the death of Balder from the Saga of King Olaf. The experience was, in Lewis’s own words, like “Milton’s ‘enormous bliss’ of Eden (giving the full, ancient meaning to ‘enormous’)”—a desire of “almost sickening intensity [for] something never to be described.” Although he could not satisfy the longing, Lewis spent his early years chasing after this feeling of feelings.

Eventually Lewis realized that chasing after joy should not be his end goal. The experience “was valuable only as a pointer to something other and outer”—a truth beyond oneself. Like the Advent season and the figure of John the Baptist, joy is a pointer to future life with God. Though there is now a period of waiting, God himself is coming to meet his people: the White Witch’s grip on creation is breaking, the snow is melting and Christmas is near. As Father Christmas exclaims in The Lion, the Witch and the Wardrobe, “Aslan is on the move.”

From Outreach Magazine  How to Reach Single Adults

Read more about Seasoned Speech in our interview with James Beitler III.