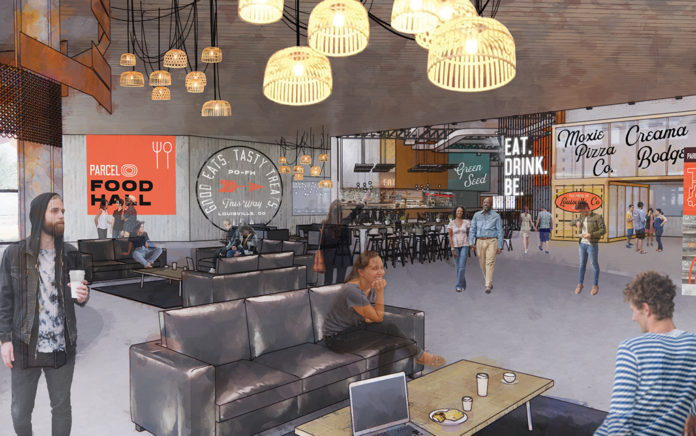 Ten years ago, the Sam’s Club in Louisville, Colorado, shut its doors like so many other businesses across America. This move left a 127,000-square-foot giant warehouse hole, 128 people without jobs and the city without sales tax revenue—not an ideal situation for anyone.

But for Ascent Community Church, it was an answer to prayer. They were growing rapidly and needed a larger building to meet in, but were having trouble finding the right space. Four years after Sam’s Club closed, Ascent Community began a month-to-month lease on the empty space.

The church uses just the front half of the building; the back is a furniture wholesale warehouse. The old Sam’s Club optometry office is Ascent’s nursery, and the former tire center is now where the elementary kids meet. To break down the large amount of space they don’t need, Ascent gets creative with black theatrical curtains.

Over the past six years, the owner of the property, which the city of Louisville had dubbed Parcel O, had priced it at $13 million because he hoped to sell to a giant grocery chain. When a potential sale would appear on the horizon, Jim Candy and Bill Stephens, co-pastors of Ascent Community, would begin looking for a new place to move the church, but then the property sale would fall through and they could stay put. This happened several times, making things a bit stressful for the church staff.

Eventually Ascent purchased another property and was in the middle of developing it when the owner of the former Sam’s Club asked Ascent leadership if they wanted to buy the property. They declined, saying, “We don’t have that kind of money. And we don’t need all the space.”

But after a lot of prayer, multiple property price drops, discussions with the city—and considering the church’s mission for everyone to be living and thriving in relational community in hopeful and surprising ways—Ascent decided to put in an offer on their current location and sell their other property. Ten years after the former Sam’s Club closed, God chose to surprise Ascent and they were awarded the property.

From Outreach Magazine  Survey: Christians Set the Bar High in the Workplace

EVERYONE KNOWN AND LOVED

Ascent spends a lot of effort surprising the city of Louisville, the local schools and their neighbors with crazy generosity. They provide teachers with meals during parent-teacher conferences and offer Thanksgiving meals for families who can’t afford them. They also create meal trains for people who need them, provide snow removal, bless and support local businesses, and the list goes on and on.

Perhaps my favorite projects that Ascent undertakes are those where they partner with the Louisville Police Department. Police Chief David Hayes helps identify those people in the community in need of home repairs or housing complexes that need landscaping. Ascent and the police department then go together and get those jobs done.

They also join efforts to host Logan’s Christmas Shoppe at the church. This unique shopping experience allows underresourced parents and guardians to come in to a beautiful, Christmas-themed toy store and shop for their kids. “Elves” (volunteers from the church and police department) wrap the presents, and police officers and Hayes deliver them as Santa and his elves. Last year, Logan’s Christmas Shoppe gave out presents to almost 2,000 kids in Louisville.

Because the church is so community-focused, Ascent wanted to use the other half of Parcel O to serve Louisville. They came to us to help figure out what that might look like. They wanted the nonchurch space to bring in tax revenue for the city to replace the Sam’s Club income, as well as jobs for Louisville residents. It had to be a space for the community, a place where residents could go to hang out, work, shop, eat and more.

From medieval England to Western towns on the American prairie, the church was once the central hub of the town. But in more modern times, we have placed churches on the outskirts of cities, gated them or even made some like exclusive country clubs. We believe it is time to put the church back in the center of town because the role of the church is to bring life to every city, every school, every business and every neighborhood. We can’t do that if we separate ourselves. The church is meant to do what Jesus did—to be with people, love people, work with people, eat with people.

With that in mind, we created a space that would do just that. We began by deciding to incorporate the name Parcel O into the design. Members of Ascent gather in circles to share stories and be in community with one another. Louisville was founded in the 1800s as a coal-mining town, so we brought fireplaces into the space to lift the spirit and the warmth of hearth and home into the design. We have plans for a food hall, a collaborative workspace, an events center and possibly an art or sports district.

“The Blue Sky workshop with the PlainJoe team was beyond thrilling to us because it was a complete paradigm shift. The idea that our story could live and breathe in architecture and space just blew us away,” Candy says. “We used a different architect firm on a previous space, and they basically just asked where we wanted stuff, like what wall should go where, what a sign should say. We love that we can now share our story with our community.”

And we are excited to play a small part in this God-size story. I would encourage you to be brave like Ascent and surprise the community around you by adding story to your architecture. Even if you can’t go as big as they did, just start small. Leave the supersizing to God.