Home Resources Where Is the Front Line of God’s Mission? Look out Your Window 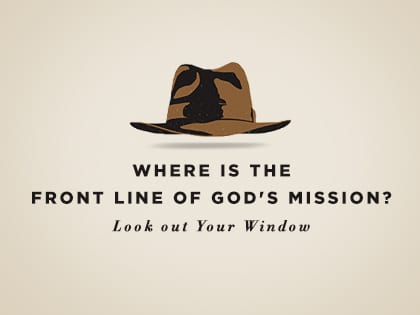 “Once you begin to see the people you’re interacting with as people for whom Christ died, it’s a game changer.”

She stormed up to me, irate, as I basked in the Californian sun during our outdoor service. “There’s a transvestite in the women’s room. What should I do?”

I smiled at her calmly. “Wait for him to come out?” I said quizzically as my smile turned to a smirk. I knew what was coming. Told you I was a punk. There was no response, just a blank look. Her eyes narrowed with apprehension of what I was suggesting we do: nothing.

With a huff, she stormed off to find another leader and tell on “that bald guy over there” who didn’t give her the answer she wanted. I’d planted this church a few years earlier, but when I returned occasionally, few knew who I was. Just some bald guy; and that was the way I liked it.

I knew the transvestite she was talking about. We had three prostitutes in the church at that time, but Marcel was a cross-dressing ex-construction worker who was coming to church regularly.

It had taken months for us to earn his trust. In fact, the first time I asked how to get in touch, he handed me a paper that had an email including “4rent” in the address. When I read it, tears started to form, and I nearly lost my composure as I folded it up into my pocket. Marcel had been a construction worker, and once he began to open up with a few of us, we realized he’d walked a very tough road.

The other leader who she tattled to later told me that the lady wanted a confrontation with Marcel. A pound of flesh. A showdown at high noon. She wanted me to give the nod for her to storm into the women’s bathroom and demand that Marcel come out immediately. After that, she was hoping one of us would chew Marcel out for the audacity to think he could use the women’s bathroom.

In many churches, if I’d given the nod, the coats would pile up at my feet as others eagerly picked up stones to throw. This is where, I fear, many Christians would make a stand against all they thought was indecent. This is where they might plant the flag and hold firmly, and as they did so, they would also pierce the heart of yet another person who’d come to a church named Refuge, and was hoping it would live up to its name.

Marcel had learned quickly that very few churches were indeed a refuge. After the service, we spoke with Marcel, and he let us know that he strategically chose to go into the bathroom during the sermon because he didn’t want to make anybody feel uncomfortable. Further, he’d chosen the women’s restroom because he usually got beat up when he used the men’s room.

In a conflict like this, experience had taught me that before the day was done we would lose somebody. The important thing was quickly deciding who it was going to be. I knew exactly how upsetting my response was to the woman, but I also knew that she could find a handful of churches where people would think and act exactly like her. She’d be welcome in those churches. Marcel? We were pretty much it. Because of the large number of funerals we’ve done in our first few years, we call Refuge the “last stop before hell.” For many people, we’re their last chance at redemption before they face eternity.

From Outreach Magazine  If You Don't Care for the Poor, You Don't Understand the Gospel

You can tell pretty easily when people just talk about reaching lost people versus talking to them. Sometimes it’s the way they describe a drug addict or somebody with mental illness, but there’s one quality that will expose that they don’t actually know anyone with those struggles—a lack of compassion. Everywhere Jesus went, if he showed one thing to sinners, it was compassion. And nothing tests your compassion like a cross-dressing prostitute on a Sunday morning.

Compassion was one of the first results we observe in the apostles at Pentecost. When the Spirit came in power, they received his heart for the community and began to see Jerusalem through his eyes. Peter had passed the beggar propping himself against the Temple Gate called Beautiful countless times on his way to daily prayer, but that morning after Pentecost, Peter saw him differently. Same beggar, different Peter. “Peter directed his gaze at him” (Acts 3:4 ESV). The Greek text implies that Peter studied him, perhaps as if he’d really seen him for the first time. Or perhaps the first time seeing him in a new way. Whatever it implies, that look was momentous.

When we come under the influence of the Holy Spirit on mission, our attitudes towards our own “Jerusalem” changes. Becoming a witness in Jerusalem means going on mission in the community you’ve probably lived in for a long time. So long, in fact, that the way you see your city, or community, or neighborhood is in need of an overhaul.

Perhaps you no longer see it all. As the Spirit consumes us for mission, we see our community as God sees it. Being a missionary isn’t so much a matter of geography as a matter of posture. The Greek philosopher Anonymous (yes, I know … this is a joke) said, “A missionary isn’t someone who crosses the seas but someone who sees the cross.” Once you begin to see the people you’re interacting with as people for whom Christ died, it’s a game changer.

From Outreach Magazine  As a Pastor's Wife, 7 Things I Wish I'd Learned Sooner

By the way, that day at the temple gates? About two thousand more men believed, in addition to the three thousand at Pentecost. Why? Reaching the Unreached Simple. The apostles had become the crucified Christ’s witnesses in their home turf, Jerusalem. And it all began with Peter taking a second look. It’s the second look that kills ya.

Every town tells the tale of two cities. There are two types of people you can choose to reach; people just like you, or people who are nothing like you at all. On Paul’s first missionary journey, he and Barnabas went home and reached people just like them. There’s nothing wrong with that; it’s a good starting point when God begins working in our lives.

Paul targeted his fellow citizens of Tarsus, in his native Turkey, and Barnabas the inhabitants of his homeland, Cyprus. But on Paul’s second missionary journey, something shifted. Paul thought he had it all mapped out, where he would go, who he would reach, but the Holy Spirit kept frustrating his attempts to go places. Finally, the Macedonian call brought him to Greece. That was the shift away from Paul’s own Jerusalem, and the beginning of the call to a specific foreign people group.

Sometimes God calls you to reach one specific people group at the expense of others, and believe it or not, there is nothing wrong with that. In every epistle, Paul claimed that he was the “sent one” specifically called to reach the unreached Gentiles. Rick Warren claimed he was called to the yuppies in his Jerusalem of Southern California. During his three-year ministry, Jesus said, “I have been sent only to the lost sheep of the house of Israel” (Matt. 15:24).