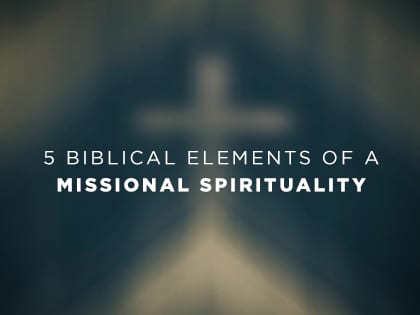 “Paul’s teaching to the Philippian church about missional spirituality is fleshed out in his teachings on the following five themes.”

In a way that resembles Jesus’ teachings in the Sermon on the Mount, Paul calls the Philippian church to a missional spirituality. In particular, he exhorts the church to pursue holiness that will foster mission advancement; to give generously for gospel partnership; to pray for missional purposes; to endure suffering faithfully as a gospel witness; and to live in missional unity.

In sum, Paul’s teaching to the Philippian church about missional spirituality is fleshed out in his teachings on the following themes:

Paul’s reference to the Philippians as saints (Phil 1:1), his commendation for their partnership in the gospel (Phil 1:5), his recognition of their heavenly citizenship (Phil 3:20), and his effusive language in describing them as “my brothers and sisters, you whom I love and long for, my joy and crown” (Phil 4:1), all provide clear indication that he acknowledged them as Christian family members, citizens of the heavenly kingdom.

Their standing in the Lord, however, did not excuse them from pursuing holiness through obedience to God. Paul’s exhortation to “conduct yourselves in a manner worthy of the gospel of Christ” (Phil 1:27) is thus followed by no fewer than eighteen commands relating to the Philippians’ progress in the faith.28 This expectation of believers’ pursuing holiness through obedience underscores the call for congregational spirituality.

Even Paul’s own spiritual progress was not merely a personal endeavor but rather the fulfilling of his duty as a disciple of the Lord in the service of the church. Alec Motyer rightly notes that Paul:

… has previously shown himself as a zealous individualist [in Phil 3:4‑6] all out for his own spiritual growth. The prize-winner dare not pause to help others over the hurdles. But see here another side of the apostle, when he weeps with care for people, and when he takes pains to lead the Philippians in the way of Christ. Individual care for one’s own spiritual progress must keep in touch with pastoral responsibility for the souls and welfare of others.

Such congregational spirituality also includes a missional emphasis, as developed in Philippians 2:14‑16. In this passage Paul commands the church to stop complaining, because such negativity “affected the moral life of the church and its witness to the world.”30 He instead calls the church to live with character, to purity and blamelessness, which he prays for at the outset of the epistle (Phil 1:9‑11).

Paul then stresses the church’s “moral distinctiveness” as key to its ability to serve as lights shining in a dark world (Phil 2:15).31 Richard Melick points out, “By their lives, the Philippians were actually holding fast to the gospel. By so doing, their lives also became the measuring rod and illumination of the world around them.”

One of the key gauges of spirituality throughout all Scripture is the relation between people and their possessions. In the Sermon on the Mount, Jesus instructs his disciples to “store up for yourselves treasures in heaven,” noting that “where your treasure is, there your heart will be also” (Mt 6:20, 21).

Disciples are told not to worry about the most basic needs in life lest it divert their attention from their primary focus, the kingdom of God (Mt 6:25‑33). Thomas Schreiner notes how excessive concern for personal security reflects a deficit of personal and corporate spirituality: “Worrying about wealth uncovers a lack of trust in God’s fatherly care, and even more fundamentally a desire to live for oneself rather than for the kingdom of God.”

Paul seems to have embodied the teachings of Jesus well in this matter, as stated in Philippians 4:11‑12: “I have learned to be content whatever the circumstances. I know what it is to be in need, and I know what it is to have plenty. I have learned the secret of being content in any and every situation, whether well fed or hungry, whether living in plenty or in want.”

Such sacrifices notwithstanding, Paul was blessed by the financial contributions of the Philippian church, using this instance to instruct them about missional giving. The church had supported Paul’s missionary labors with financial gifts on at least three occasions (Phil 4:15‑17).

Their initial gift made quite an impression on Paul, as they were apparently the only congregation contributing to his missional labors: “I set out from Macedonia, not one church shared with me in the matter of giving and receiving, except you only” (Phil 4:15).

Paul notes that their giving is not merely a matter of parting with their own finances but also of becoming conformed to the image of Christ. In Phil 4:10 he describes their giving as a demonstration of their “concern” (phronein) for him, a word Paul uses throughout the epistle to “point out proper Christian attitudes in following the mind of Christ.”

Moreover, he notes their giving was a spiritual blessing far beyond material gifts. O’Brien notes, “Paul did not covet the Philippians’ gifts; instead, he had his heart set on the compound interest that kept accruing to their account (v. 17), that is, their ongoing spiritual progress and God’s blessing in their lives by which they would continually grow in the graces of Christ until the parousia.”

In all this, Paul is confident the Philippians will experience more than just his appreciation for their generosity: “And my God will meet all your needs according to the riches of his glory in Christ Jesus” (Phil 4:19).

This statement underscores the uniquely Christian relationship Paul shared with the Philippians, as social conventions of the day would otherwise have placed Paul in their financial debt. In this case, however, Paul is not in debt because God is the one who repays, thus highlighting the fact that “Paul and the Philippians share a friendship founded, directed and sustained by Christ. Their giving and Paul’s receiving happens in and through Christ … Indeed, from this Christ-focused perspective it is not always clear who is giver and who is receiver.”

Christians who are in the habit of giving to the mission of God can therefore enjoy Christian partnership with the people of God and will, in due time, be rewarded by him.

Missional spirituality is seen also in the congregational prayers of Paul and the Philippian church. Paul’s prayers are filled with gratitude for the Philippian church in light of their partnership in the gospel. He prays for them neither in passing nor out of mere duty, but “in all my prayers for all of you, I always pray with joy” (Phil 1:3‑5).

Moreover, he prays specifically for their spirituality, namely that their “love may abound more and more in knowledge and depth of insight, so that you may be able to discern what is best” (Phil 1:9‑10). Paul thus reminds the Philippians that they are being prayed for and are encouraged to grow as disciples in answer to his prayers; yet he also recognizes that he is in need of their prayers as well.