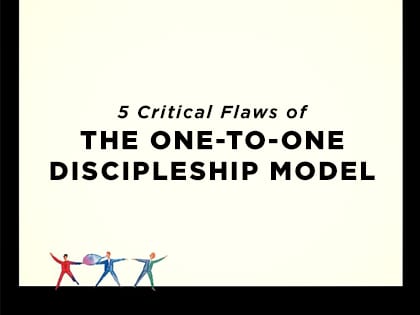 “As long as there is the sense that one person is over another, few people will see themselves as qualified to disciple others.”

Because of the imprint of the Paul-Timothy model, we unquestioningly assume the one-on-one relationship as our reference point in discipling relationships. But with the hindsight of thirty years of discipling in microgroups, the following are my reflections on some of the limitations of the one-to-one discipling dynamics.

1. In the one-on-one relationship, the discipler carries the responsibility for the spiritual welfare of another.

The disciple is like the mother bird who scavenges for worms to feed her babies. With their mouths wide open, the babes wait in their nest for the mother bird to drop in the morsels. The disciple is cast in the role of passing on his or her vast knowledge to the less knowledgeable. This puts pressure on the discipler to perform and be the focal point in the relationship. In this model, in order to disciple another, one must have arrived at some undefined state of spiritual maturity. Unwittingly we have created a role few will feel qualified to apply for. Instead of the disciple enjoying a freedom or ability to be his or her self, an imposed perfectionism fosters self-consciousness.

2. The one-on-one relationship sets up a hierarchy that tends to result in dependency.

As the line of authority is emphasized, an unspoken reliance is built that is difficult to overcome. Though the Timothies (people in the receiving position) might be appreciative, they will have difficulty seeing themselves in the giving position. After all, the dynamic created is that they are the young, immature ones. They are to receive from the fount of wisdom of the one who has walked longer in the faith. The gulf between the Paul and the Timothy is exacerbated when the relationship is between pastor and parishioner. Pastors are perceived as qualified to disciple others because they have years of biblical and theological training and the vocation to go with it. How could the disciple possibly make up for his or her lack of formal education!

From Outreach Magazine  The Origin Story of the Bible

I liked the one-on-one discourse to a Ping-Pong match. It is back and forth, with the discipler under pressure to keep the ball in play. The conversation must progress to some higher plane. As a discipler I found that I did not listen as carefully as I should have, because I was thinking about some wise counsel or insight I might provide, given my role. In other words, the dialogue is often not a dynamic interchange because it is limited by the number of participants.

The primary influence on a new disciple becomes a single person. This in itself can be limiting and tends to skew the development of the disciple. The parameters of the discipling experience are defined by the strengths and weaknesses of one individual. Do we really want our life to be the sole model of Christian discipleship? I don’t think so. Each of us is just one expression of Christ working in us.

5. The one-on-one model typically does not reproduce.

If the one-on-one model does reproduce, it is rare. Only self-confident, inwardly motivated persons can break the dependency and become self-initiating and reproducing. This was the crux of my frustration. Over considerable time, I was investing in one person, but if multiplication was a major goal, I wasn’t seeing a return on the investment.

I concluded that we have inadvertently held up a hierarchical model of discipling that is nontransferable. As long as there is the sense that one person is over another by virtue or superior spiritual authority, few people will see themselves as qualified to disciple others. We may tout this as a multiplication method, but it contains the seeds of its own destruction.

As a result of my experience, I propose a nonhierarchical model that views discipling as a mutual process of peer mentoring. In order to avoid the dependency trap, the relationship needs to be seen as side by side rather than one person having authority over another.

Greg Ogden recently retired as executive pastor of discipleship at Christ Church of Oak Brook. Prior to that he served as director of the doctor of ministry program at Fuller Theological Seminary. Now based in Monterey, California, he lives out his passion of teaching about the disciple-making of the church.