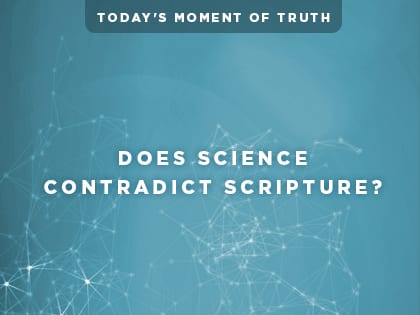 “From an infinitesimal point, the entire universe and time itself exploded into being. And science can’t account for it.”

In the beginning God created the heavens and the earth. (Gen. 1:1)

Much has been written about the origin of the universe. Has it always been here, or did it have a beginning? If it did have a beginning, what caused it to come into existence?

In the early twentieth century an understanding emerged that gradually formed the prevailing theory among cosmologists. “In the beginning there was an explosion,” explained Nobel Prize–winning physicist Steven Weinberg. “Not an explosion like those familiar on earth, starting from a definite center and spreading out to engulf more and more of the circumambient air, but an explosion which occurred simultaneously everywhere, filling all space from the beginning, with every particle of matter rushing apart from every other particle.”

Within the tiniest split second, the temperature hit a hundred thousand million degrees Centigrade. “This is much hotter than in the center of even the hottest star,” he wrote.

The matter rushing apart, he explained, consisted of such elementary particles as negatively charged electrons, positively charged positrons, and neutrinos, which lack both electrical charge and mass. Interestingly, there were also photons: “The universe,” he said, “was filled with light.”

“The matter of the Universe,” wrote Robert Jastrow, astronomer and founding director of NASA’s Goddard Institute for Space Studies, “[was] packed together into one dense mass under enormous pressure, and with temperatures ranging up to trillions of degrees. The dazzling brilliance of the radiation in this dense, hot Universe must have been beyond description. The picture suggests the explosion of a cosmic hydrogen bomb. The instant in which the cosmic bomb exploded marked the beginning of the Universe … In a purely physical sense, it was the moment of creation.”

From Outreach Magazine  Equipped to Share the Gospel: First Church

From an infinitesimal point—which scientists call a singularity—the entire universe and time itself exploded into being. And science can’t account for it.

Yet the very first verse in the Bible explains: “In the beginning God created the heavens and the earth” (Genesis 1:1). As theologians have classically put it, “God created everything ex nihilo”—meaning “out of nothing.”

Science is catching up with Scripture. Jastrow, who was not a Christian, famously remarked, “For the scientist who has lived by his faith in the power of reason, the story ends like a bad dream. He has scaled the mountains of ignorance; he is about to conquer the highest peak; as he pulls himself over the final rock, he is greeted by a band of theologians who have been sitting there for centuries.”

As Christians we should be lovers of truth. So seize opportunities to learn from both theology and science—while worshiping the God of all truth.