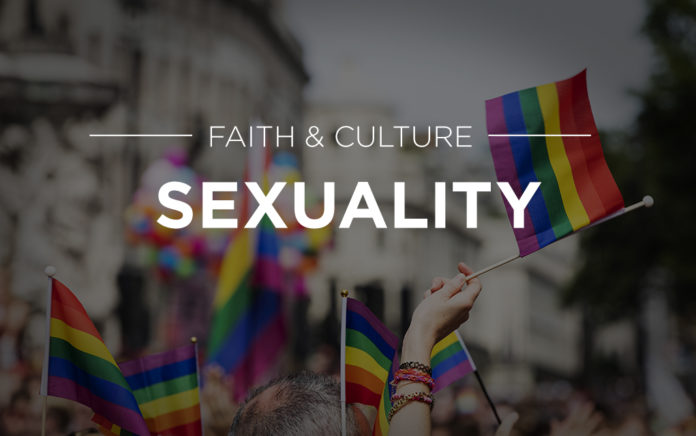 The opposite of homosexuality is not heterosexuality, but holiness.

We spoke to six experts about how the church can be a redemptive voice and compassionate presence in front-burner cultural issues.

The following article on the topic of sexuality is based on a conversation with Christopher Yuan, a Bible professor at Moody Bible Institute and an international speaker. He is the author of Holy Sexuality and the Gospel (Multnomah).

My passion for the topic of human sexuality grew out of my own personal experience. It was a real reality for me, not just an abstract concept. I was not raised a Christian, and didn’t have a biblical framework to understand my struggles, desires and thoughts. It was part of my own life experience, and I use my past experience to have a gospel-centered, grace-filled, truth-filled response.

I wrestled with desires I never asked for. I didn’t identify as a gay man until in my early 20s. I came out of the closet, told my parents, and it was through my coming out to them that they came to faith.

My parents were looking for answers, not having any background in Christianity. My mom had been turned off by a bad experience with people who called themselves Christians.

My mother was born in China, raised in Taiwan, and came to the United States for grad school. She wanted to achieve the American dream and had achieved that. But with all the things that come with worldly success, she was not content. My parents’ marriage was a wreck. They had begun paperwork for divorce. I had just come out. Her world and her family were falling apart.

She just wanted to talk to someone, so she decided to go to see a minister. He gave her a pamphlet that shared the gospel. She had bought a train ticket to visit me at dental school in Louisville, and reading that pamphlet on the train, she realized that she is a sinner. By the grace of God, he removed her blinders and she decided to give her life to Christ. Miraculously, my father also decided to follow Christ.

I went in opposite direction: That’s good for them, but not for me. While in dental school, I got involved in partying and doing drugs. I was selling drugs to friends, students, even professors. Three months before graduation, I was expelled. So, I moved to Atlanta, continued to sell drugs, and became a supplier to other dealers in a dozen states.

My parents didn’t know I was doing drugs, but they knew I needed Christ. They visited me in Atlanta, and I would not come home or answer their phone calls. When I did come home, I kicked them out. They weren’t preaching to me, but just the fact that they radiated Christ was offensive.

Dad gave me his Bible. I threw it in the trashcan. I wanted nothing to do with God, Christianity or the Bible. I was completely unreachable and hopeless. So my parents decided to depend on the promises of God. Mom prayed, God, do whatever it takes to bring my prodigal son home. She fasted for 39 days on my behalf and spent hours on her knees reading the Bible and crying out to God. It would take nothing short of a miracle to bring me home.

That miracle came with a bang on my door and 12 DEA agents and two German shepherds. I had just received a shipment of drugs, and I was charged and sentenced to 10 years to life in federal prison. I called home, dreading the phone call, and my mom’s first words were, “Are you OK?”

Rom. 2:4 says it’s God’s kindness that leads us to repentance. That’s a good reminder to those of us with a desire to share the gospel with the lost.

One day, I was walking around the cellblock and looked at a trashcan. I thought to myself, This is my life: trash. Then I noticed on top of the trash was a Gideon New Testament. I had an enormous amount of time on my hands, so I began reading it, and read through the Gospel of Mark.

Soon, I was called to the nurse’s office and received the news that I was HIV positive. Back in my bunk, I noticed that someone had inscribed on the bottom of the top bunk: If you’re bored, read Jeremiah 29:11 (I know the plans I have for you …). At that point I had no hope or future, yet God was saying that even in exile he still had a plan for Israel, and he had a plan for me. I didn’t know where it would take me, but it gave me the strength to get through one more day.

As I explored the Bible for a justification for my homosexuality, which I could not find, I came to a turning point decision: either abandon God and live as a monogamous gay man, or abandon the gay life by freeing myself from my sexuality and live as a follower of Christ. I chose to follow Jesus and realized that my sexuality should not be the core of who I am. God loved me unconditionally, but I realized that unconditional love is not the same as unconditional approval of my actions. My identity as child of the Living God must be in Jesus Christ alone, who asks us to be holy as he is holy.

When I became a Christian, I thought I also had to become heterosexual. God never commands us to be heterosexual. The opposite of homosexuality is not heterosexuality, but holiness. The opposite of every sin is holiness. My biggest sin was not being in a same-sex relationship. My biggest sin was unbelief. If we don’t get that right, it leads to legalism and behavior modification. Change isn’t the absence of temptation—Jesus was tempted in every way. Change is the ability to be holy even in the midst of temptation. The power of God is not in human effort, but in the work completed on the cross.

From Outreach Magazine  The Broader Current

When I was released from prison in July of 2001—after my sentence was reduced from six years to three years—I applied to Moody Bible Institute with references from the prison chaplain, a guard and a fellow prisoner. I started there a month later. Then I went on to get a masters in exegesis from the Wheaton College grad school and a doctorate at Bethel Seminary. Now I have a global speaking ministry with my parents talking about God’s truth and grace on sexuality.

As Christians we need to realize that despite all the other problems that seem most apparent in the lives of nonbelievers, their biggest problem is that they are separated from God because of faithlessness and unbelief. As we understand that to be their true problem, we can be used by God.

Before you preach the gospel you must live the gospel. Sometimes we’re too quick to use words when we haven’t done pre-evangelism—the work to turn rocky soil to good soil that’s ready to receive the gospel. Your gay atheist friend is not going to come knocking on the door. You have to be intentional to go out, invite them for coffee, have them in your home.

When the church doesn’t come around the centrality of the gospel, that’s when we can start focusing on secondary issues. God gave us the church to be the main context through which we live the Christian life on earth—it’s to be done in community. As much as we desire intimacy, the true context of intimacy is to happen not in the nuclear family, but in our spiritual family: the body of Christ bound not by physical blood but by the blood of Christ.