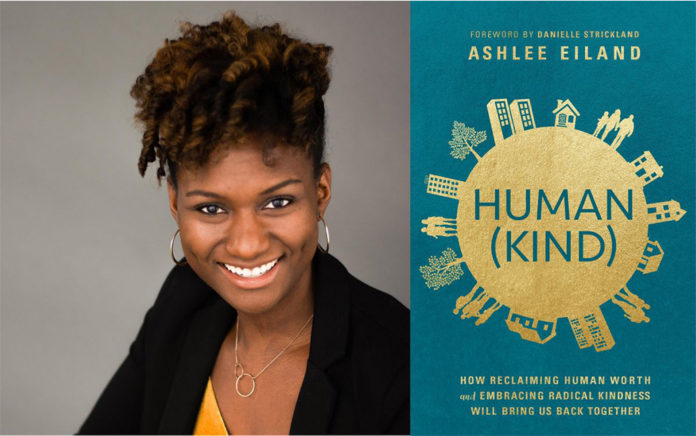 Rediscovering civility in a culture of division

Ashlee Eiland is the formation and preaching pastor at Mars Hill Bible Church in Grandville, Michigan, and a popular speaker on God’s message of redemption. Her first book is Human(Kind) (WaterBrook), on which this interview is based.

I felt so heavy after the 2016 election, not necessarily around policy but around how engagement was happening. As someone who professes Christ, I felt grieved. This was not elevating individuals’ Imago Dei—the image and likeness of Christ that I believe Scripture states very clearly each human carries in them. We’re in another election year now, and we need a different way forward in our relationships and in the way we engage one another in culture, in society, in families, in workplaces. We need kindness.

I don’t know that I would say I was born attached at the hip with kindness. I think there’s absolutely a place for anger. I’ve been angry at injustices in my own life and elsewhere in the world, but that is a cancer that affects me if I choose to allow it to grow roots. In some situations when I was treated badly because of my skin color, yes, anger was an immediate response, but beyond that, I think I’ve been able to cultivate an empathy and a recognition that each human being has some really good stuff inside.

We’ve all been formed by hurt, pain, resistance, poor decisions, so there’s a tenderness there. We arrived here somehow. That sense of kindness has come forth because there’s more to the story in every human being than just a single interaction. I truly do believe that passage in Ephesians where Paul calls the church at Ephesus to be kind or tenderhearted to one another and to forgive each other as Christ forgave us. That’s what I keep coming back to.

My experiences as a black girl growing up in a white community have played a role, too. When you’re the only person of any category in a room, you develop an empathy for the other “onlys.” And I found myself as the “only” a lot. Looking back, many of those spaces were environmentally and situationally on opposite ends of different spectrums. Growing up in Texas: a largely conservative environment. And then attending college in Los Angeles: a largely liberal environment. In both of those places, I was forming relationships with people who held their values very deeply. I thought, Whether I agree or not, I still find value in the relationship. I think that gave me fresh eyes to see people who were outliers while also saying, I don’t want to do this by myself, so let me go ahead and form relationships in the midst of these polarizing experiences, and those relationships built empathy in me. I think my more painful experiences gave me a long-suffering of sorts, a patience and grace for the human condition, which I think we’ve lost.

Our stereotypes and prejudices follow us everywhere. And so people have this perspective that perhaps we’ve made some strides because of the civil rights movement or because of different pieces of legislature. But legislature doesn’t always account for everyday life. We think about these broad brushstrokes and forget about Monday to Sunday in someone’s workplace. The call to Christians is to narrow the scope a little bit. The most meaningful moves of friendship in my life have been when people have texted me or stopped by to ask how I’m doing. That’s important, because stories speak to systems. Stories give color to systems. Stories give color to decisions made in government.

From Outreach Magazine  5 Things Your Church Must Prioritize to Thrive

There’s a pace to the American church that needs to be slowed down. There needs to be a self-examination embedded in the fabric of every single church leader that requires risk and a level of humility to ask ourselves, Who are we right now? Maybe there are some really beautiful things about that story, but what are the hard and broken things? Those sorts of reflective questions require time and space, but we’re moving so quickly through programs and new initiatives that that’s often not available. We need to create the space and be willing to stop and reflect on the cultures we’ve been building within the church and what parts of those cultures are naturally born out of who we are as leaders.

I think we’re professing a lot of belief, but are we actually living out those beliefs? If I were to take a video camera and follow a church leader around, am I actually seeing what was said on Sunday lived out? One of the first things my husband and I said when we moved into our current home was that we needed to get to know our neighbors. I cannot stand on a church stage and tell others they should get to know their neighbors and not know my own. So, are we actually doing what we say we believe, or are we falling into the trap of formulating a succinct tweet or a nicely worded blog post and thinking we have done enough?

It’s a really good practice to intentionally get around people you don’t agree with. We naturally find people we identify with, who come from similar backgrounds or cultures. We flock to our flock. But a couple of times in the gospels Jesus went through Samaria. He did not actually have to. There were different ways around it, but he intentionally goes and finds the people who would be classified as “different” in the first century. I actually think that’s a part of spiritual formation: intentionally being around the other. And that can start within our families. It doesn’t have to be finding a nonprofit or going across the world. There’s something actually harder, I believe, in going to our own families, friends, co-workers or neighbors, and intentionally listening. A church leader can set aside 30 minutes a week to take someone out to coffee who’s rubbing them the wrong way. While that conversation is happening, they should ask themselves two questions: How has God placed the image of himself in this human being? And what unifies us?

In our own stories and the stories of others, kindness helps build a unifying rallying cry about humanity. It acknowledges our stories and calls us to something higher. My hope is that there is a tectonic shift in our churches so that we become the place where people feel not just the safest, but are drawn back to something greater. That includes politics, but it transcends politics. I hope churches can call people to kindness, and to something more unifying than just a single opinion or a deeply held belief or value. Those are great, but I hope we’re called to a greater story—the story of Jesus Christ.