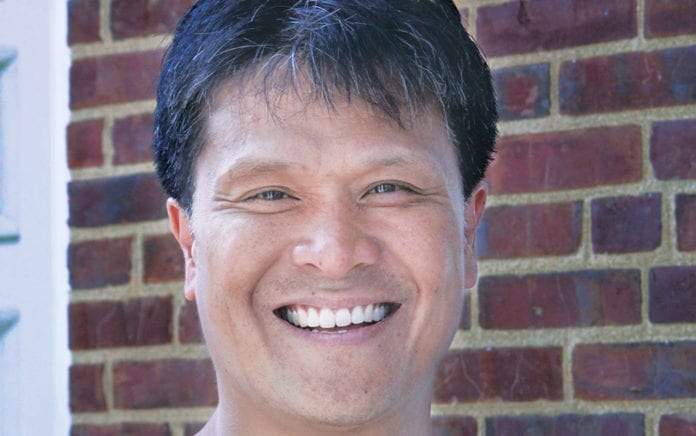 He was disillusioned with missions, now he wants to reimagine it.

For the last 35 years, Al Tizon has been learning what it means for the global church to engage in mission as Jesus intended. As a Filipino-American who spent a decade with his family on mission in the Philippines, he understands on a personal level how the church can use—and misuse—mission, and how that can affect the reconciliation of peoples worldwide. And as executive minister of Serve Globally—the international ministries arm of the Evangelical Covenant Church—and affiliate associate professor of missional and global leadership at North Park Theological Seminary in Chicago, he’s a thought leader in this space. He lives and breathes it daily so that he may understand more holistic, God-centered ways for the global church to bear witness to the gospel.

In his latest book, Whole and Reconciled: Gospel, Church, and Mission in a Fractured World (Baker Academic, October 2018), Tizon establishes a theological and practical framework for sharing the gospel on mission in a way that reconciles a broken world—people to one another, people to God and people to the earth. It’s the only way, he says, for the church to wage peace on earth as a testimony to Christ’s love for earth and all mankind.

How did you develop such a burden for justice issues and intercultural unity, and how did that lead you to view mission through the lens of reconciliation?

The burden that developed in me for “whole mission” correlates directly with the bigness of the gospel. As I’ve discovered more and more the depth of the meaning of “gospel of the kingdom,” the more convinced I’ve become that it is the power of God to right every wrong: the sins of the human heart, social injustice, violent conflicts, environmental destruction. The gospel of the kingdom that Jesus preached is that big. As such, it transforms the spiritual, psycho-emotional, relational, economic, social and cosmic dimensions of life. This big—or whole and reconciled—gospel calls for whole and reconciled mission.

I am a Filipino-American born in the Philippines but raised in the United States. Shortly after coming to faith in a somewhat typical way to American youth, I felt called to return to the Philippines as a missionary. My wife and I and our children lived and served there for almost 10 years. What an adventure we were on as we served among the poor and dispossessed. As if missionary life were not adventurous enough, there was a personal dimension that made those years permanently life changing: the rediscovery of my Filipino heritage.

Part of my rediscovery, however, was also the history of missions in the Philippines, from the Catholic Church that accompanied colonization at the hands of Spain to the Protestant Church that accompanied the occupation/colonization at the hands of the United States. I began to realize the cruelty and indignity that my own people suffered for centuries in the name of some dominant nation, but also in the name of Jesus. I became an angry, confused young man. Convinced that missionary life was the most noble and committed way to live out the Christian faith, I went as a champion of the Great Commission. But after learning more about what happened in the motherland and many other missionized nations around the world, I became disillusioned and wanted desperately to disassociate with Christian missions altogether. I realized, however, that if I abandoned mission, I would have to abandon the Christian faith, which is inherently missional. You can imagine the dilemma I found myself in!

Obviously, I’m still a Christian and I’m still very much committed to mission, for I’m still convinced that Jesus is the answer to the world’s problems. The most faithful response to the underside of Christian missions is a reimagining, not an abandoning, of mission. However, we must do mission differently in a globalizing, post-Christendom, postcolonial age.

How are mission and reconciliation linked?

This book is my attempt to guide the church to do mission differently. Admittedly, when I began this project, my definition of reconciliation was horizontal—that is, to restore healing and wholeness between people and people. But as I progressed in the study, reconciliation expanded to include vertical and circular dimensions. In my mind, holistic ministry can no longer be just about putting evangelism and social concern back together; it is rather participating with God in putting the world back together. In fact, reconciliation begins with the vertical, as God initiated movement toward humanity. It also includes the circular—humanity’s need to reconcile with the earth itself. The church is doing the ministry of biblical, holistic reconciliation when it is being evangelist (vertical), peacemaker (horizontal) and steward (circular) in the world. This is reconciliation, and I argue that it’s the new ‘whole’ in holistic ministry.

From Outreach Magazine  Michelle Sanchez: The Truth of Fiction

I call the church as evangelist, peacemaker and steward “the Whole Commission,” as I combine the Great Commission of Matthew 28:18–20 and the ministry of reconciliation of 2 Corinthians 5:18–20. It is what I believe Jesus commissioned us to do until he returns by the power of the Holy Spirit.

Discipleship is part of holistic mission too. How does that fit into the broader picture, especially on a global scale?

Discipling the nations is what drives the church’s mission across cultures and around the world. Disciple making is not one more thing to add to the list of missional activities; it is what drives the whole mission of the church. What is the church’s mission in the world? Making disciples of all nations. How do we do that? We bear witness to the good news of the kingdom of God in word (evangelism), deed (peacemaking, mercy and justice) and life (personal and community formation).

I find the very phrase “making disciples of all nations” found in Matthew 28 as indicative of God’s comprehensive plan for the world. I see in it individuals being formed into disciples of Christ, as well as nations being formed into the likeness of Christ’s kingdom. As Western Christians, we easily see disciple making among individuals, but discipling all nations, as the text says, trips us up a bit. Grasping the bigness of the kingdom of God is what enables me to see that God desires peace and justice among the nations as part of the Great Commission to make disciples, while never losing sight of the importance of each individual forming into a follower of Christ.

In Part 2 of the interview, Al Tizon unpacks some of the most critical issues around missions in the church today.