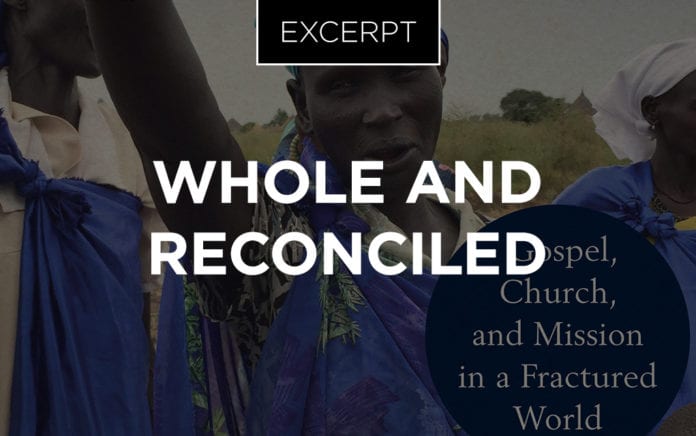 Excerpted From
Whole and Reconciled
By Al Tizon

To operationalize God’s kingdom dream, the church needs to develop competencies in reconciliation if it desires to be relevant and effective in today’s globalized world.

The church needs to develop intercultural competence. It needs to enter boldly into the multicultural fray that increasingly describes our neighborhoods and communities today with a humility that is eager to learn and with enthusiasm for bearing witness to the gospel for all cultures. It needs to be intentional about meeting the new neighbors and serving them, as well as being served. Harvest Time Christian Fellowship (HTCF) in Philadelphia provides a prime example of developing this competence. A predominantly African American congregation, HTCF intentionally moved to a predominantly Hispanic neighborhood located just on the other side of a large park that separates the two communities. More than a geographical boundary, the park has symbolized the segregation between the two communities. Replanted now on “the wrong side” of the park, HTCF not only began to offer English as a second language classes but also recruited a number of residents from their new community to teach Spanish to church members as part of its efforts to bridge the two communities.

The times require this kind of reconciliatory intentionality to counter the divisiveness of our world. To continue to have monocultural churches, conferences and other Christian gatherings should make less and less sense as the world becomes more and more globalized. These monocultural gatherings should feel as incomplete as attending an all-men’s or all-women’s church. As C. René Padilla asserts, “The church as a homogeneous unit is a contradiction in terms.” This especially rings true in the age of globalization. We should develop an acute awareness that when we gather together in Christ’s name for whatever reason, we need to model the multicolored gospel of reconciliation.

The church also needs to develop interreligious competence as part of the ministry of reconciliation in a fractured world. Inevitably, as cultures come together, so do different religious belief systems. The interactions between different faiths has proved to be one of the most volatile in the age of Padilla, “Imperial Globalization,” globalization. Some scholars, such as Arun Pereira, argue compellingly that as mass migration blurs the lines between nationalities, religion will become the primary point of identity for people—and likely a point of sharp disagreement. If Pereira is right, then the danger of religious wars can become more acute as religious fundamentalists dig in their heels.

From Outreach Magazine  Al Tizon: Globalization and the Global Church—Part 2

It is all the more important, therefore, that “legitimate leaders of peace-loving religions … recognize this situation as an opportunity to effect positive change in our world and thwart the efforts of religious fanatics who are using it for their selfish and twisted goals.” It will become extremely important in the coming days—if not already urgent—for the church to learn how to dialogue with “the religious other,” to know how to listen to and learn from them, as well as to know how to proclaim Jesus in word and deed in a confident but humble way. Christian-Muslim tensions, for example, have risen to disturbing heights. Myers keenly observes, “Learning to love our Muslim neighbor may be the biggest and most important missiological frontier Christians face in this century.”

I suspect that theology of religions—the specialized field in Christian theology that deals with the complexities posed by a plurality of religions in the world—will gain in prominence in the age of globalization, not just in the academy but also in lay training institutes and church adult education programs. For churches need to know how to understand, interact with, and work together with people of other faiths. Elsewhere I develop a number of postures that outline a practical theology of religions, which includes the practice of Christian hospitality, authentic dialogue, and humanitarian partnership with people of other faiths.

In the age of globalization, we also need more than ever to develop intergenerational competence as the ministry of reconciliation addresses the perpetual rift between the young and the old. As Sam George asserts, “Globalization and the emerging culture are deeply intertwined subjects and have a reciprocal relationship. … Youth culture simultaneously shapes globalization and is shaped by it.” Our young have before them the largest smorgasbord of knowledge, beliefs, values, and lifestyles ever known. To the extent that it can, the church needs to know the nature of the massive amount of information at the fingertips of the young and how they process it. It needs to be in touch with their thinking about life, God, church, sexuality, relationships, violence and death more than ever before. And it needs to know how to share Jesus in a way that resonates with them, lest it completely lose the next generation to the globalization vortex.

From Outreach Magazine  Why 'Professional Evangelism' Is Hurting the Church

Intergenerational competence depends largely on the church overcoming its propensity toward traditionalism, that is, its resistance to change. In the age of globalization, where change is the name of the game, church traditionalism (not to be mistaken for “tradition,” which is a good thing) becomes much more pronounced. When the church easily dismisses technology as a legitimate vehicle for spiritual experience, for example, the youth begin to slip away. When it scoffs at their movie and musical icons as figures of anti-faith, the youth begin to slip away. When the church refuses to at least have open conversations regarding outlooks, values, and philosophies that differ from church conventions, the youth begin to slip away. In order to develop intergenerational competence, the church “must change with the continually changing culture, yet preserve the truth of the gospel of Jesus Christ and the historic Christian faith.”

Tell me more about this book »
Order this book from Amazon.com »
Read an in-depth interview with Al Tizon »

Excerpted from Whole and Reconciled by Al Tizon, ©2018. Used by permission of Baker Publishing. BakerPublishingGroup.com