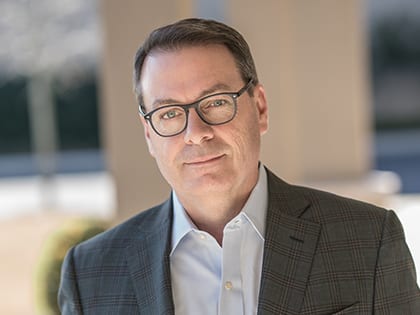 “The challenge of leadership is to engage our culture so people are drawn to God through spiritual hunger.”

Bullied as a child, average in most every way, given a mind for numbers, Chris Hodges never imagined he would become a senior pastor. Every weekend, he stands amazed that he leads Church of the Highlands, which gathers more than 45,000 attendees on 17 different campuses throughout Alabama.

In his most recent book, The Daniel Dilemma: How to Stand Firm and Love Well in a Culture of Compromise, Hodges explores the balance between grace and truth necessary to create great influence.

During an interview with Outreach, Hodges talks about how an act of vandalism involving 100 dozen eggs brought him to Christ, and shares insights from the book of Daniel.

Did you grow up in the church?

I was born and raised in Louisiana. I was in church literally from the day I was born. My dad was an organist in a Baptist church. It seems there was never a time when I was not in church. I did the Baptist tradition at the age of 7 of walking the aisle and getting baptized, but I really found Christ when I was 15. That’s when I met Christ and had a dramatic turnaround.

Is that when you began to feel a calling to ministry?

I was more on fire for God than most. I loved the church growing up, but I didn’t think I would go into ministry. I thought I’d follow in my dad’s footsteps; he was an auditor. He was the most brilliant financial mind I’d ever met and had a very disciplined approach to everything. Our lawn looked like it was cut with scissors. I grew up in a family where everything was done with excellence every day. I was raised in a very principle-oriented house. Everybody in our home was very involved in church and loved church.

In your book, The Daniel Dilemma, you write that you were bullied as a child.

I have never been the sharpest guy or a great athlete. I wasn’t really exceptional with grades or school. I was average. My family moved when I was in junior high and I got brutalized. As a seventh-grader, I ended up in the eighth-grade PE class. At that age, one year made a lot of difference. They had facial hair and I had a squeaky voice; they bullied me pretty bad.

One day, they tied me to the fence with their jackets and made me late for class. Coach came out and saw me and paddled me. I got in trouble for something that had been done to me, and I got really bitter.

How did the bullying affect you?

I finally made the decision that it wasn’t going to happen to me again. I kind of went crazy as a prankster, joker and made everybody laugh. When I came to Christ I had just gotten in trouble with the law for egging someone’s house. We had a hundred dozen eggs. We just demolished this house. There was a neighbor that wrote down the license plate number. This was a catalyst that God used to wake me up to say, This is not going to end up well if you keep on this path.

When did you begin to feel a call to ministry?

I believed I would never be a senior pastor. For the first 18 years of my ministry, I served as an associate pastor and loved it. I believed I could best serve the church by helping the senior pastor’s dream come true. In May 2000, I was in Birmingham to see a baseball tournament. I had stopped by a coffee house overlooking a valley with a six-lane highway. I was sitting drinking coffee when the Holy Spirit told me: “You are going to pastor the people here.” I didn’t really know what that meant. When I moved to Birmingham in October 2000, I didn’t know a single person; that’s how naive I was. We set a launch date for February 2001 and ended up growing to more than 600 people that first year. I was having the time of my life. I was just doing what I deeply loved, and the rest is history.

What was your vision for Church of the Highlands?

I was raised with Pentecostal theology. I believe in the gifts of the Spirit and miracles though I’m not a sensationalist by any stretch. I felt where the charismatic movement was headed was making it hard to reach people who were lost. They were being turned off by the Jim Bakker and Jimmy Swaggart scandals. The church-planting mantra in 2000 was seeker friendly. I wondered: Can we be seeker friendly and Spirit-filled at the same time? I wanted to see people through a process, a journey of discipleship and spiritual development.

In terms of evangelism, what have you learned in your 17 years at Church of the Highlands?

God has set eternity in the heart of every person. People who don’t believe want to believe. They want God. A lot of times they don’t want the packaging that comes with the church. Today, for example, the millennial generation rebels against size, what they perceive to be big organizations. That’s a totally different cultural perspective from when we started the church. The challenge of leadership is to engage our culture so people are drawn to God through spiritual hunger.

What led you to write The Daniel Dilemma?

We were going through a series on the book of Daniel in 2013. It led to a redefinition of success for our church. The question for us became: Can we stand firm and be an influence at the same time? There’s a segment of Christianity that’s so dogmatic, and even though they may be right technically, they are also ineffective. They are standing firm and winning no one. They think that’s godly and it’s not. The whole other side is to love people but never ask them to deal with sin. Daniel provides a balance. John 1:14 states that Jesus was full of grace and truth. An effective witness requires both.

From Outreach Magazine  The Truth About Competency

In particular, what captivated you about the life of Daniel?

Daniel is a historical and prophetic book. Babylon parallels the culture we live in, where America is trending. Daniel was known as a man of great character. He was a teenager when he was exiled to Babylon. During 70 years of exile, four administrations of Babylonian leaders asked Daniel for his advice. That got me. I wondered: Is our culture asking Christians for our opinions? The problem is that the only picture of God the culture has is not the Bible; it’s Christians. We are the ambassadors. God is making his appeal through us. Through the lens of Daniel’s life we wanted to learn the same balance of grace and truth. If the people of our culture only see a religious institution, they fail to see the person of God. If people in our culture had a true picture of God, they would want him.

How do we begin to do that?

A lot of people don’t get Ephesians 2:10: “You were created in Christ Jesus to do good works.” God had a purpose for you first; then he made you. Purpose and identity are connected to each other. That’s why Paul talks about, “the hope to which he has called you.” The more you are connected to your calling, the more purpose you have. In my mind, Jesus was trying to get people away from the earth focus, always redirecting them to the eternal. Life here is a mist and is quickly gone. At the end of the day, it’s a matter of the afterlife, heaven and hell. We do a lot in the church that is important, but our most important function is getting people to know Jesus as their Savior and Lord.

In Part 2 of this interview, Chris Hodges talks about losing his autistic son at a ski resort in Colorado, how to address the hot button issues of our day with humility and grace and how a sermon series on the book of Daniel helped him read the writing on the wall.