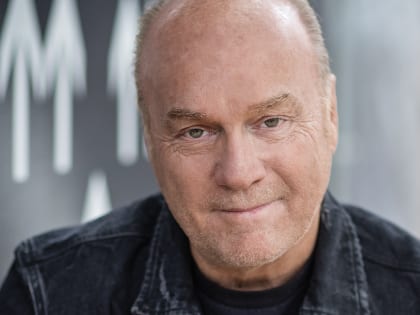 “If a pastor possesses a burden for evangelism, the people will get that burden. But if there is a mist in the pulpit, there will be a fog in the pew.”

In Part 1, Greg Laurie looks back on the influences that shaped his early life and eventual discovery of faith. Here he reflects on his own calling and the simplicity of the calling we all share: Tell Someone!

Shortly after his conversion, Greg Laurie feared a calling to preach.

He had preferred to ink cartoons to create his own tract: a little more humorous than the fire and brimstone popular in that day, called “Living Water.” A million copies were printed and distributed throughout the world. Despite the success, Greg was drawn to share good news face to face.

He remembers one day stumbling upon a group of people being baptized in the blue cool waters of the Pacific. Without warning, the Lord gave Greg a Scripture to share and, before he knew it, he was baptizing people who mistook him for a pastor.

On the natural amphitheater overlooking the ocean, Greg ended up speaking to the crowd and believed the sermon he gave was a sort of movie trailer of things to come for him.

He knew he would spend his life sharing the gospel.

You lead a church that does events very much like the old Billy Graham crusades. Do you consider yourself an evangelist or a pastor?

I was convinced I was called to be an evangelist. I used to watch Billy Graham crusades on my grandparents’ black-and-white and I also went to a crusade in the early ’70s. I didn’t believe I would ever preach in a stadium, but felt I was called to evangelism. After my conversion I began to attend a Bible study started by the guy who had led me to the Lord. I was doing graphic design and hanging around the church as an intern. One day, someone asked me if I wanted to teach the Bible study. I taught about 100 young people and, week after week, they asked me to come back. When they started to call me Pastor Greg I was feeling a little conflicted: Am I an evangelist who is pastoring or a pastor who is evangelizing? Eventually, I realized I was called to do both and that was the foundation of what was to become our church.

From Outreach Magazine  A Church of Diverse Cultures

You were wrong about never preaching in stadiums. In fact, as we discuss this now, you will soon be holding a crusade at AT&T Stadium, which seats more than 100,000 people at the previous home of the Dallas Cowboys. Can you give me some background on how this happened?

We started doing events with bands in large auditoriums and I got to preach the gospel as a kind of prototype of events to come. We started out reaching 3,000 to 5,000 people, which led to crusades in much larger venues. We have brought the gospel to more than 5 million people with 500,000 professions of faith. The crusade coming up in Dallas is the biggest crusade we have ever done.

[The event involved hundreds of local churches and featured music by Christ Tomlin, Lecrae, Switchfoot and MercyMe, and event that was also simulcast to thousands of churches, theaters and living rooms across the country.]

The numbers are impressive, but your church focuses on personal evangelism. Isn’t the most important number the number “1”?

Spurgeon said, “The Holy Spirit will move them by first moving you.” One question I often ask pastors is: “When is the last time you shared Jesus, not from the pulpit but with another person?” If a pastor possesses a burden for evangelism, the people will get that burden. But if there is a mist in the pulpit, there will be a fog in the pew.

In terms of personal evangelism, what do you want your people to know?

I think Jesus offers a template for evangelism as recorded in John 4, the story of the woman at the well. He’s not only our Lord and Savior, he’s the master communicator and he showed us how to do it. He sat at the well at high noon. Ostracized from the village for her immorality, a woman shows up and Jesus asks her for a drink of water. He shows his vulnerability. She wonders why he, a Jew, would ask her, a Samaritan, for a drink of water. Jesus builds common ground with her. Often Christians want to win the argument more than win the soul. The objective here is to build a bridge, not burn one. When we share the gospel, we have to remember it’s a dialogue, not a monologue. Preaching is monologue. Sharing the gospel with another person is dialogue—one-to-one.

Would you say that the woman at the well became the first great evangelist?

It brings us back to the centrality of story. Jesus knew her story and could see a better ending. She was an outcast. She had a reputation. Everyone knew who she was. She became the first evangelist because she simply shared the story of meeting a man who “told me everything I ever did.” One of the most effective tools for evangelism is simply sharing your personal story.