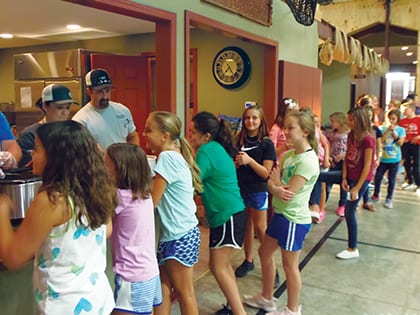 The Church
Rock Springs Baptist Church in Licking, Missouri
The Challenge
Create a warm, inviting atmosphere for youth to learn about Jesus.
One Big Idea
Hold a Wednesday night dinner and Bible study for local children and teens.

When John Jordan arrived five years ago to serve as lead pastor for the 120-member congregation at Rock Springs Baptist Church in Licking, Missouri, he couldn’t help noticing something was missing.

“Where’s the small-group Bible study for adults?” he asked.

The response astounded him: “We had one, but we let it go in order to grow a student ministry.”

As it turns out, the church’s adults used to meet on Wednesday nights while the children gathered in the back of the church to play. One day the adults considered the message of Psalm 78:4: “We will not hide these truths from our children; we will tell the next generation about the glorious deeds of the LORD.” The church decided to disband the adult study and focus on teaching students instead. What followed was a Wednesday night meal/Bible study for children, preschool through 12th grade. Today, an average of 180 students attend each week.

“Students are drawn to the love that’s involved in the preparation of these meals,” says Jordan. “The ladies don’t just throw hot dogs and chips on a plate. It’s a full meal—spaghetti, garlic bread, a salad with sliced tomatoes. They feel Christ’s love for them as they go through the food line.”

Wednesday night is not full of bells and whistles to entertain the students. It’s simply a meal followed by study time and worship. Teachers do, however, create a dynamic Bible lesson each week.

“It’s important we show our passion for Jesus and our love for them,” says Jordan. “If we’re not doing those two things, we’re not getting the job done.”

Noting that many of the students come from broken, chaotic homes, he says they are attracted to the church’s sense of unity. Still, Jordan acknowledges that student ministry is tough.

“It’s noisy. It’s messy. It’s costly, but you know what? It’s worth it,” he says, which is why Rock Springs Baptist has made student ministry a priority, securing 20 percent of its budget to support it.

What they’ve found is that instead of parents introducing their children to Christ, it’s the other way around as children invite their parents to church. The church has launched an adult Bible study for women; a men’s group soon followed. So, it seems Jordan got his adult Bible study after all—just in God’s time.

“When we allow God to work in his order, success follows,” says Jordan.