Home Ideas Because of the Cross: Cross Church 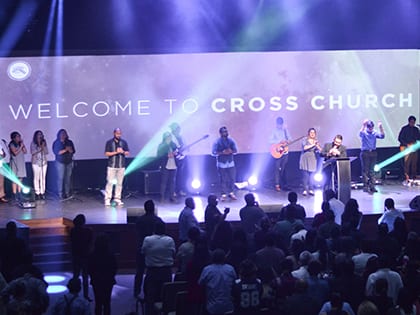 A 15-minute drive from Mexico, Cross Church in San Benito, Texas, is one of the few megachurches in the region, according to Pastor Jaime Loya. He started the church 22 years ago and still remembers when the congregation included just his family members and could fit into his living room.

“We started right next door to the projects in a small house that was probably not even 1,000 square feet,” Loya says.

Since 1995, the church has grown tremendously by investing in the impoverished community that surrounds it. Cameron County stands out as one of the poorest counties in Texas.

“[The poverty has] been a challenge our whole ministry life,” Loya says. “A lot of it has to do with the influx of undocumented people that drives the paying wage down, and the lack of education and the high dropout rate, which continues the cycle of poverty.”

Eric Garza, who became a church member eight years ago and recently joined the staff as operations manager, says the church has always been active in the community. For years, it has held services in English and Spanish so that everyone in the liminal space known as the border, or “La Frontera,” feels at home. Cross Church has also engaged in community development.

“We’re very externally focused,” Garza says. “We’re a very generous church. That permeates our membership. The church is supporting missions around the world.”

Because residents of San Benito don’t have much cash to spare, Cross Church relies on the congregation to help the church achieve its goals. Moreover, it does not take any donation for granted, Loya says.

“We have to be very good stewards of our resources and not mismanage or be wasteful,” he says. “We depend a lot on volunteers.”

Loya estimates that up to a third of the congregation volunteers at the church in some capacity. He says these individuals, many of whom come from a Catholic background, are drawn to Cross Church and commit to serving because of the ministries offered, the sermons and the church’s embrace of San Benito’s bilingual culture.

“We have a very exciting children’s ministry, and I think our preaching is pretty dynamic,” he says. “The praise and worship and the caliber of the preaching of the Word have really drawn a lot of people.”

Garza recalls feeling at home when he visited Cross Church for the first time.

“The atmosphere, the welcome, the message—the whole package—we felt very welcome,” he says. “It was one of those situations where you walk in and you feel God’s presence, and you make a decision.”

Today, Garza’s parents, siblings and extended family members all attend Cross Church. He says they like that the church offers ministries for people of all ages—from preschoolers to youth to seniors.

Cross Church’s name not only refers to the church being cross-cultural, but also to it being cross-generational, Loya says.

After leading the church for more than two decades—he was just 20 when he founded the church—Loya says he’s learned an important lesson about spiritual leadership.

“What I’ve learned and what I’m learning is that it’s not about me, that God has called me to lead in this season, but it’s really about the team and the people,” he says. “I lead, but this is not my vision. This is God’s vision for our region and beyond, and he’s chosen to entrust that to me in this season.”

From Outreach Magazine  Living Faithfully in Seasons of Lament

Be sure to pick up a copy of the Outreach 100 Special Issue for an in-depth interview with Pastor Jaime Loya.