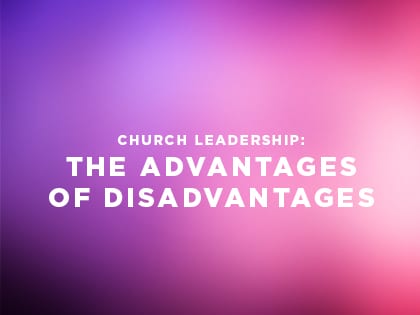 “When God is with you, everything that people dis you for becomes an advantage. I call it the DIS-advantage.”

David and Goliath. You know the story: Runt of the litter who’s too young to join the army challenges the champion Goliath. David is short, Goliath is giant. David has no armor, Goliath’s armor weighs a ton. David only has a sling, while Goliath has the typical sword and spear of a warrior. And you know how it ends: Goliath taunts David and Israel, but David slings a stone that knocks Goliath down, leading to a full rout of the Philistines. It’s the classic underdog story, and has even has become common parlance in culture, as small teams seek to defeat the top dogs in sports.

The problem, as Malcolm Gladwell points out, is that everything you know about the story is wrong.

Goliath was built for close combat. There was nothing he could do to defend himself against a warrior armed with a sling, who could hurt you from far away. Many medical experts now believe that Goliath suffered from acromegaly, a benign tumor in the pituitary gland. This causes an overproduction of human growth hormone, which would make you exceptionally tall. It also leads to bad vision. Remember when Goliath says, “Come over here,” so he can fight him? It is likely he needed David to come near so that he could see him well enough to fight.

Undoubtedly God was on David’s side, and that’s the point: When God is with you, everything that people dis you for becomes an advantage. I call it the DIS-advantage.

We’ve seen this over and over in our church, and you’ve seen it in yours. Here are typical disadvantages I’ve complained about over the years:

And while all those things are true, I’ve now realized that all of them are actually advantages:

Everything that seems like a reason to dis our situation becomes an advantage.

I saw a picture on Twitter several months ago that sums this up. It was a wooden pole with a piece of plywood on the top, and a crate attached to that. Essentially, it was a (poorly made) homemade basketball hoop. It looked cheap, it was falling over. The crate was definitely harder to shoot on than a real rim on a straight goal in an air-conditioned gym. The text next to the picture said, “Buddy Hield grew up shooting at this hoop. Now he’s a millionaire.” In case you don’t know, Buddy Hield was the sixth overall pick of the 2016 NBA draft, and is now making $3 million per year. His hoop didn’t hurt him—it made him learn to shoot with more accuracy. What seemed like a weakness was actually an advantage. A DIS-advantage.

So what’s your crate? What’s the thing in your church that people could dis you for? What’s the thing that seems like a weakness? Remember that the Lord of heaven’s armies is with you, and in his hands, your weakness becomes an advantage.