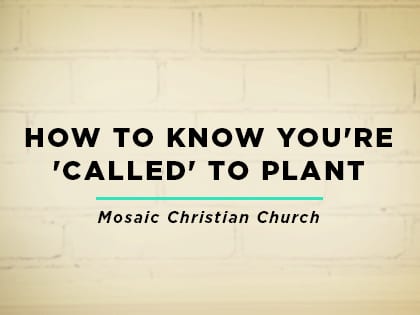 “You’ll never be 100 percent sure about your calling until after you’ve done what God has asked.”

I recently had someone who’s exploring church planting ask: “How did you know you’re called to plant a church?”

When we were deciding how and where to plant, I interrogated every church planter I could find on how they determined where to plant. So many of them had these amazing stories of divine encounters that led them to plant where they were.

I remember one story in particular of a guy who went with his wife to explore a city in a state they’d never visited. They weren’t feeling much excitement about it, but a friend convinced them to check it out anyway. After they picked up their rental car, they stopped at a gas station so the husband could get a snack and the wife could ask directions. While the husband was picking up his Ho Hos, the wife walked up to the counter. At that moment the woman behind the counter said—to no one in particular—“I wish someone would start a church I could be a part of.” Immediately the wife who was visiting said, “We’re here to see if we should start a church here!” By the time the husband walked up to pay for his Ho Hos, the 2 women were crying, hugging and praying together. The wife announced: “This is where God wants us to plant!” Sure enough, they moved there, and now lead a large, growing, healthy church.

As my wife and I tried to figure out where to plant, we were waiting for the clouds to part, sunbeams to strike us, and God (in a Morgan Freeman-esque voice) to tell us where we were supposed to move to plant a church. Only problem—that never happened.

The most famous story of “calling” in the Bible is probably Moses and the burning bush. You know the story: Moses sees a bush that’s on fire but doesn’t burn up, God calls to him, Moses says “Here I am,” God tells him to go to Egypt to set his people free, end of story. Now, you’ll hear people talk about “calling” a lot and whether they’ve been called to plant a church. You’ll even hear them talk about their “burning bush experience”.

But I think we miss a big part of the story. After God tells Moses what to do, Moses asks, “But how do I know for sure that you’re really sending me?” God answers: “Here’s how you’ll know: After you’ve brought the people out of Egypt, you’ll worship me on this mountain.”

Think about this. First, most of us would be perfectly happy with the burning bush. But Moses wants a little more. Maybe he’s not sure he heard right. Maybe he sees burning bushes a lot. Either way, he needs confirmation. But God’s confirmation is bizarre. It would be like if you said, “I know for sure that this year the Ravens are going to win the Super Bowl. So take out another mortgage on your house, empty your retirement, and bet every penny you can on the Ravens to win it all.” I’d of course ask, “How do you know that? Prove it!” and your response would be, “After they’ve won, we’ll have a party at your house to celebrate.” That’s exactly what God is doing here! He’s telling Moses, “Risk everything you have to go to Pharaoh, and here’s the sign you can trust me—after you’ve done it, we’ll have a party here to celebrate.” If I were Moses I would’ve said, “Uhh, God, I know you exist outside of time and all, but that’s not very helpful for us humans.”

Is it worth it? Yes.

The question really comes down to: Would you rather take a risk that you think God has called you to—and possibly fail, OR would you rather play it safe, with no possibility of looking foolish?

My wife and I thought God called us to Baltimore to start a church. Now, after baptizing hundreds of people, we’re confident he did. But if we had waited until we were 100 percent sure, we would have never known.

What do you think God is calling you to do?