Home Features Open Eyes for the Least of These 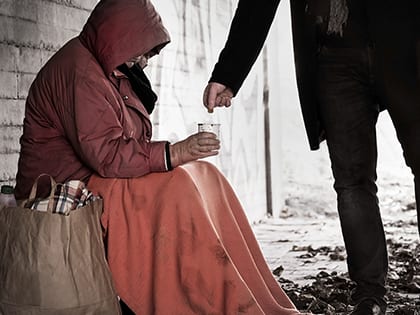 Some lessons I learned about compassion when God opened my eyes to share a meal with a homeless Turkish woman.

Several years ago, I took improv classes in downtown Chicago to help develop my right-brain skills. I left mid-day to miss the traffic and then catch up on my task list at a table at Chipotle. One week, with my ear buds snug in my ears to block out noise, I focused on my “important” projects. I was busy, maybe too busy. Out of the corner of my eye I noticed a dark haired sixty-ish women sitting at the table to my left. As she held a courtesy cup I watched her use a spoon to crush a few lemon slices in water. What happened next surprised me.

Something prompted me to ask her if she had anything to eat. In broken English she said that she hadn’t eaten all day. After we talked for a few moments I learned that she was Muslim, had immigrated from Turkey five years earlier, and had been homeless for four years.

As I heard her story God prompted me to say, “I want to buy you dinner.” At first she refused, but then with thankful tears she acquiesced. I bought her a chicken salad and a soft drink.

For the next 45 minutes I set aside my “important” tasks and simply listened to her stories, often as she gently cried. I learned her name, Sabria. I learned that a problem had occurred with her immigration papers that had led to her homelessness. Also, her husband had divorced her in Turkey decades prior, her parents were dead and she never had children yet two sisters and a brother were still living. She told me that she refused to beg on the street and would not become a “dirty girl” which I understood to mean she refused to become a prostitute.

From Outreach Magazine  Bringing the Gospel to Forgotten Places

I told her that the meal (and some money I later gave her) was from Jesus and that I was a Christian. She responded with, “I like Jesus too.”

As my class time neared I asked if I could pray for her. Wide-eyed she said, “Ok.” After I prayed, I left her my name and told her I’d be there every Wednesday at 5. I had an inkling that I might see her again (I did a few times).

Here’s what this “God encounter” with Sabria taught me.

1. Too often I let tasks trump relationships.
2. God brings opportunities to serve the “least of these” at inconvenient times.
3. I can’t ignore the tasks that ministry requires, but when I am in task mode I must keep my spiritual “peripheral vision” active, looking for those “God moments” with the Sabrias of the world.
4. God values everybody and so should I.
5. True love always costs me something, my time, my money, my listening ear, etc.

Has God every encountered you in this way by interrupting your plans with his? What have you learned when he did?

Today, be on the lookout for your Sabria to whom God wants you to love.