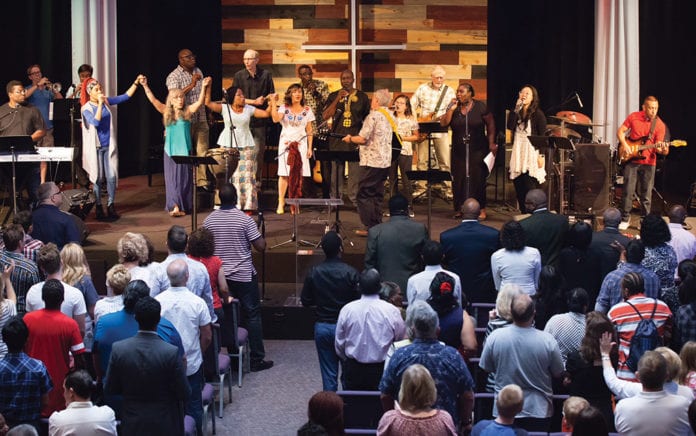 How an Anglo church in Aurora, Colorado, intentionally embraced a multiethnic vision.

New Life Community Church is today a healthy multiethnic church in Aurora, Colorado. But it wasn’t always so. Its pastor, Jeff Noble, led the congregation first to embrace a vision and then to become a church that reflects the diversity of its community for the sake of the gospel.

The church, part of the Evangelical Free Church of America, has a congregation that is 57 percent non-Anglo, including attendees at Sunday’s English and ethnic fellowships with participants are from more than 30 nations. On a recent Sunday, Hispanics, Filipinos, Middle Easterners, Ethiopians, African- and white Americans alike came together for what New Life billed as an All Nations Praise Service and Meal. The church offers ESL classes and refugee assistance. Through such ministries a man who once ran an armaments plant in a Muslim country recently gave his life to Christ.

Such beautiful integration at the church was not always the case. Pastor Noble tells the story of its transition below, and offers insight from lessons he’s learned along the way.

New Life Community Church (NLCC) has been a lighthouse for Christ in the east Denver metro area since its founding in 1956. During its first four decades, NLCC had been an Anglo church in the fast-growing, mostly white suburb of Aurora. In the late 1990s, however, things began to change. People of various ethnicities began moving into the city in greater numbers, and the church found itself at a crossroads: Do we change, relocate or do nothing and eventually die?

I’ll admit: It was hard for the congregation to decide to adapt in order to reach all people, let alone in time to actually do it. In those days, there were few resources or examples of churches that had transitioned from mono- to multiethnic, successfully. It was then that God led pastors Myung Kim (Korean) and Erik Valenzuela (Hispanic) to approach New Life about holding services in our facility, and we welcomed them.

After a short season of having a landlord-renter relationship, however, Myung, Erik and I began gathering periodically for dinner and prayer. As our personal relationships grew, so did our trust and love for one another. Soon, God prompted us to hold periodic services and events together.

From Outreach Magazine  Course Corrections for Life and Ministry

Over time, God brought other ethnic pastors and fellowships into the New Life family, as well. With each new addition, the richness and diversity of fellowship continued to grow, and ministry ideas began to flow.

Rather than being a bastion of white Christians in an ocean of diversity, NLCC today is a “house of prayer for all nations” (Mark 11:17). Currently the church averages 600 attendees on Sunday mornings at its English-speaking services. Of these, some 35 percent are non-Anglo and/or internationals representing 30-plus different nations. In addition, an average of 325 people attend five different ethnic fellowships taking place primarily on Sunday afternoons.

So, what instructive truths can help your church develop in similar fashion?

Apart from prayer, building relationships is the most important thing you can do—everything else flows from it. Pastors George Johnson, Ken Joo, Nelson Lopez, Ayman Armanious and Gudeta Burka have become some of my dearest friends. When diverse leaders get to know and trust each other, members of the church will follow their example.

When a multiethnic vision or calling takes root in your heart, you will want to see it fulfilled as quickly as possible. Yet in transitioning a church from mono- to multiethnic, you have to be patient. As Mark DeYmaz says, “The last thing you want to do is split your church in the name of unity.” Looking back over the last 10 years, I realize New Life has transitioned through the following stages:

Where is your church along this continuum?

Rather than force the issue, New Life has been very flexible in relation to our ethnic fellowships. Over time, the majority of these have felt led to formally become a part of New Life, but some have not and eventually moved to another part of the city or found their own facilities. When this happens, together we thank God for the season we have had and send them off with our love, prayers and blessings.