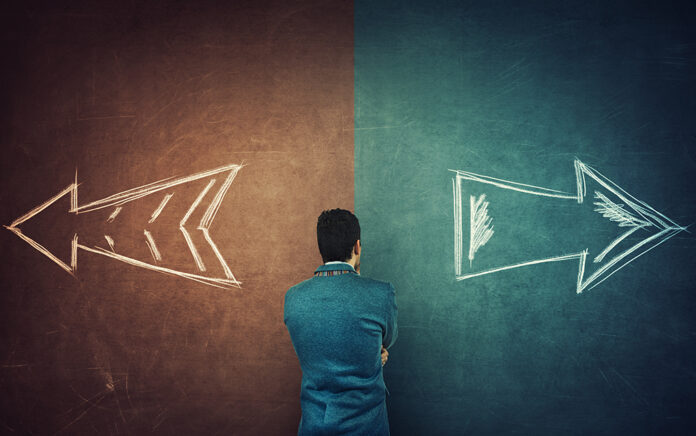 How do you get people to follow you when you don’t know where you’re going?

That’s kind of the new leadership paradigm we’re in.

As the pace of change accelerates and the chaos continues, it’s hard to know what tomorrow holds, let alone the future.

Sure, that’s always been true, but it’s never been as true as it is right now.

Heading into the third straight year of chaos, confusion, division, and uncertainty, it’s exceedingly hard to know where you’re going as a leader or organization when so much is beyond your control.

So, how do you get people to follow you in that context?

Increasingly, talking about vision can feel like what you’re really saying is Follow me. I don’t know where I’m going.

What can help when you don’t know where you’re going? Here are five things.

Yes, you’re imploding on the inside. I get it. You’re heading into your third year of unpredictable crazy.

That’s what prayer, a good counselor and a close friend are for. That’s not what social media or your public communication is for.

In a world that’s become increasingly unhinged, people are looking for leaders who are, for lack of a better term, hinged.

In the 1979 Vietnamese “boat people” crisis, thousands of Vietnamese people set sail in small ships looking for refuge in other countries; one panicked person could sink an entire boat. Conversely, one calm person could diffuse the tension.

You need to be that calm person, even when you might feel like you’re falling apart inside.

When the pandemic first hit in 2020, many people cited Edwin Friedman’s metaphor on cultivating a non-anxious presence as the initial panic of a global pandemic gives way to frustration and exasperation. It’s worth revisiting.

In a crisis, says Friedman, the difference between the companies, organizations and families who survive and flourish versus those who disintegrate was the presence of a “well-differentiated” leader.

“I want to stress that by well-differentiated leader I do not mean an autocrat who tells others what to do or orders them around, although any leader who defines himself or herself clearly may be perceived that way by those who are not taking responsibility for their own emotional being and destiny.

“Rather, I mean someone who has clarity about his or her own life goals, and, therefore, someone who is less likely to become lost in the anxious emotional processes swirling about.

Leaders who can do their venting privately and their leading publicly will have a much better season ahead of them than leaders who don’t.

2. Ask Yourself, Is It Helpful?

I’m not arguing you should be inauthentic.

Neither Friedman nor I would argue you should put on a false face or pretend like nothing phases you. Toxic positivity is a genuine problem in the same way toxic negativity is.

But when it comes to figuring out what to share publicly and what to hold privately, use this simple test.

Ask yourself, Is this helpful?

Is it helpful that you share what you’re feeling? If you (or others) can’t answer that with a yes, process that privately.

Example: I’ve been fortunate to be able to help thousands of leaders find practical strategies that keep them out of burnout and help them recover from it. I’ve been through burnout and didn’t just make it through; I learned how to be much healthier.

But go back to my season of burnout, and I would have been useless trying to help anyone. Trying to give a message on burnout while burning out would have been like watching a bad therapy session from a leader who had no idea what was happening to him.

So I processed privately while I led publicly, focusing on other things in my sermons and public talks—not my burnout.

But after I processed it enough to be helpful, I could talk about it.

By the way, anger, frustration, exasperation and despair are rarely helpful to talk about publicly while you’re experiencing those emotions. Process them long enough to help people. Then share them.

You can still be upset, but having processed them, at least your emotions are moving people in a better direction.

You’ve now been running hard (almost non-stop) for two years. Some of you have been doing that for even longer than that.

The one thing most leaders haven’t done for a few years now is to make space in their everyday workdays to reflect, pray, think, plan and strategize.

That has to change.

You can’t get clarity on what you need to do to make progress when running at 100 miles an hour doing things that aren’t helping you make progress.

When the crisis first hit in 2020, it’s understandable that almost every leader worked 18-hour days trying to figure out what was going on.

But that simply isn’t sustainable moving forward. It can’t be. It shouldn’t be.

When a crisis moves from acute to chronic, you need a new approach.

When you’re caught up in an anxious whirlwind of non-stop deadlines, meetings and the brain fog that crisis brings, you’re almost certain to never make progress.

A leader recently told me that you can’t solve work problems while at work. There’s a lot of truth in that.

Even taking a simple hour at a coffee shop, at a lake, in a quiet home office, or on a walk every day will help you get the clarity you need.

As you move into the future, ask yourself: What space will I carve out every day to reflect, think, plan and strategize?

For people of faith like me, I intentionally left prayer off the list because I’m guessing you’re praying daily, which is awesome. But you have to go beyond that and prayerfully reflect, think, plan and strategize for the future.

If you don’t carve out the time to do that starting now, there won’t be much of a future left to plan for. Or at least not one you’re happy with.

If you’re saying, But I don’t have another hour to devote to this, that is exactly your problem.

My latest book, At Your Best, will give you the strategy you’ve been looking for to carve out that time daily.

In a chronic crisis, that’s your lifeline.

4. Be Honest About What Isn’t Clear.

Certainty has always been an illusion of sorts, but in times of rapid change and confusion, it’s even harder to find.

When the fog begins to lift and you get some clarity on next steps, you might still be overwhelmed by how much isn’t clear.

That’s okay. The world is currently upside down.

The people you lead know that. So, don’t pretend to know something that everyone knows you don’t know.

Leaders who cast vision by saying things like There are many things we don’t know, or Things are changing constantly, or Obviously, there is a lot that’s out of our control engender more trust than leaders who claim certainty in the midst of chaos.

To be fair, claiming certainty (even if you’re denying reality and making it up) will always attract a small, fervent and sometimes crazed audience. But your followers at that point will come from the fringes.

There are, for example, a lot of Flat Earthers who claim they are absolutely right, but it’s a very tiny group when you look at the entire population. And that’s probably not who you’re called to lead or reach.

Most people will trust you more when you’re honest about what you don’t know. And there’s a lot we don’t know right now.

5. And Focus On What’s Clear: The Mission And …

Of course, there’s also a lot that is clear. Your daily time to reflect, sort, sift and strategize will help you zone in on that.

If you’re a restaurant owner, you know that people need to eat and that they appreciate great food.

If you’re in tech, you know that people will continue to buy phones, download apps and try to solve problems with technology.

And if you’re a preacher or church leader, there is an abundance of clarity you can offer in the midst of uncertainty.

The mission is always clear. Cling to that. That’s why people are with you in the first place.

In a sea of uncertainty, focusing on the mission is a bold act of leadership.

People also need hope, and the gospel offers so much that hasn’t changed. Here’s a partial list of what you can focus on:

When there is so much that isn’t clear, focusing with an empathetic kindness on what is clear is leadership in and of itself.