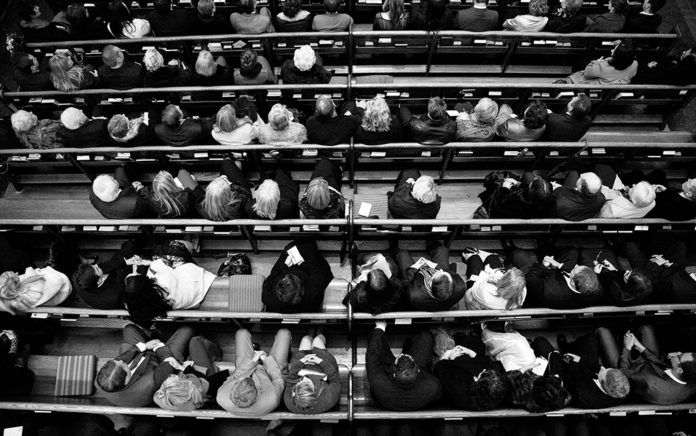 As things continue to change and the crisis we’re in drags on, you’re probably asking what’s going to happen to physical church attendance in the future. That’s a really important question.

The good news is that as long as there are people, people will gather.

The need for human connection and face to face gatherings runs deep—it’s how we were designed.

But over time, how people gather has changed from generation to generation and moment to moment.

This may be one of those moments for the church.

While in-person gatherings are here to stay, in the future church, people may gather differently.

For decades now, there has been a slow decline in in-person church attendance. Growing churches have bucked that trend and managed to find growth despite massive cultural shifts.

There are indications though that the disruption of 2020 is accelerating those trends even further (here are three shocking statistics about how rapidly church is changing).

Yes, physical attendance is here to stay. But, it may not follow the patterns quite the way it did even as recently as 2019.

And if the trends are changing rapidly, so should your response.

While the cement is still wet, here are four ways in-person church attendance might well morph further as we head into the future.

1. In Person Doesn’t Necessarily Mean in Your Facility.

So, let me say it again. The gathered church is here to stay. In the future, we may just gather differently.

For centuries, the gathering of the church has happened in a facility, and as leaders, we’ve become both accustomed to that and a bit addicted to that way of gathering.

One of the big shifts that the disruption is ushering in is that in-person doesn’t necessarily mean in your facility.

It could be far bigger than that.

With some of the shift home for work, school, shopping, dining, entertainment and fitness is temporary, a proportion of it will likely be permanent in the post-COVID era. The same is perhaps true with church.

With 71% of Boomers desiring primarily a physical church experience and only 41% of Gen Z desiring a primarily physical experience of church, some kind of change seems inevitable.

Younger generations are deeply social, and forward thinking churches might look to capitalize on facilitating home gatherings, community gatherings and other micro-gatherings that pull people together for in-person experiences.

When church leaders realize that this isn’t a threat, but possibly an advance of the mission, the mission could move forward at greater scale and speed than in a model where everyone had to gather in one central facility.

Before you think “house church,” realize that this model could provide a lot more growth than most North American house church models ever did. Many home-based churches to date are a retreat from the organized church. This could become an advance.

From Outreach Magazine  Why I Gave Up Working for God

In the same way workplaces are embracing permanent distributed teams, a distributed church that’s centrally connected to joint leadership and mission could be a massive step forward for most churches.

2. In-Person Attendance in the Building Will Be a Percentage of Your Real Church.

If you think about it, for years now, the people in the building on any given Sunday have been a minority of those who call your church home.

If you have an attendance of 150, you probably have 300 or more people who are actively engaged in your mission. They just don’t show up all at once.

I completely empathize with the frustrations of empty seats and not having “everyone” together, but if you can begin to expand your definition of “together,” you can realize a much deeper sense of mission.

Or even imagine packing out your auditorium. Awesome. But what if there are still far more people engaged who aren’t in the room?

That leads to a much expanded mission.

If you expand your definition of gathering, it’s much easier to genuinely expand your mission.

3. You’ll Use the Building to Reach People Online, Not Use Online to Get People in the Building.

For centuries, church facilities have existed to assemble people.

And in a pre-digital world, that made a lot of sense. In a digital world, facilities will still play a role, but perhaps they’ll play a different role.

In the future church, the way church leaders think about buildings and online might flip.

If you look at the way many churches use their online ministry, it’s designed to either get people in the room (join us Sunday at 9) or to show people what’s happening in the room (here’s our livestream).

Then, the building becomes a means to an end, not the end in itself.

No matter how large your church is, the world you’re called to reach is larger.

For decades now, even committed Christians have been attending church less often (here are 10 pre-pandemic reasons why).

With the rise of online ministry and millions of people exploring that for the first time, that trend is likely to continue.

I understand how disappointing it can be to have a “committed” follower show up once a month.

When I started ministry, if I ran into someone I hadn’t seen at church in six month at the supermarket, it was pretty much a guarantee they had left our church. More recently, when I run into someone at the grocery store that hasn’t attended church in a few months, they likely haven’t left. They love our church … they just haven’t attended. Having grown up in the church, I still don’t fully understand that mindset, but it’s a real thing.

From Outreach Magazine  Is Religious Faith Really Good for Us?

My guess is that with digital options abounding in the future, frequency might drop further.

And as hard as that is for church leaders, it’s important to remember that culture never asks permission to change. It just changes.

So maybe think about it in a fresh paradigm. In addition to the other points in this post, ask yourself why “attendance” is still a litmus test for devotion.

Is it a little like saying in sports that only people in the stadium are true fans? Or, only people who buy an iPhone from the Apple store in person are real customers?

You and I know that’s not true.

I have argued before that decreasing attendance rarely signals increasing devotion. While that has been true in the past, I wonder if it’s always true (or still true) in the new culture that’s emerging, particularly if people gather in person outside of the facility and use online options to deepen their faith, not weaken their faith.

I’ve also argued that attending church no longer makes sense, but engaging the mission does.

We’re all figuring this out in real time. And yes, it’s confusing.

But if you see the future, you can seize it. If you miss it, you’ll miss it.

5. Digital Church Will Be More of a Front Door and a Side Door Than a Back Door.

The great resistance to digital church in the last decade for many leaders is the fear that people would walk out the back door and never come back.

And in many cases, that happened. Consumers left and never engaged meaningfully again.

What that means is the fear around digital church moving forward is largely a false one.

In fact, many leaders will realize that digital church will serve as much more a front door and side door than a back door. A front door to new people, and side door for existing people who want to engage more deeply or stay connected when they’re away.

Everyone who’s wanted to leave is gone. That ship has sailed.

Which means, those who are left will use your online presence almost exclusively as a way to engage, not to disengage. A way to stay connected, not to disconnect.

It also means many people will discover your church for the first time through your online presence and want to engage physically with you, whether that’s in your facility, in a micro-gathering, in group or all of the above.

The back door days of digital ministry are pretty much behind us.

The front door and side door days are just beginning.

If you see your physical presence and online presence as working hand in hand, your mission can move forward in more ways than you imagined.