Home Features My Top 10 Secrets to Improve Your Public Speaking 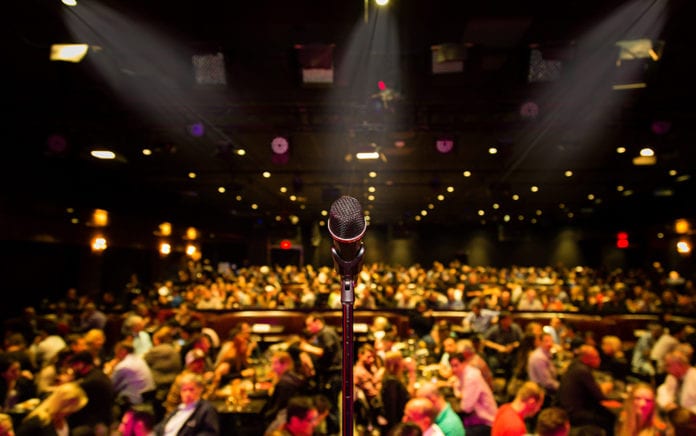 Practicing these tips will help you better connect with and engage your audience.

If you’re going very far as a leader or creative professional, sooner or later you’ll need to speak to audiences. Whether it’s a conference keynote, workshop or you just need to inspire your team at the office or studio, I believe every leader should be comfortable speaking in front of a group. However, there are plenty of speakers, preachers and teachers who simply aren’t capable of captivating an audience. That’s why I created these top ten secrets that will take your public speaking to a new level. Conquer this list and you’re on your way:

1. Stop using fill-in words like “um,” “ah,” “like” or “aaah.” In today’s noisy and cluttered world, speakers feel like they need to fill the empty spaces in their talk. But in that noisy and cluttered world, we actually value silence. So don’t be afraid to pause. When you don’t know what to say, don’t insert nonsensical fill-in words—simply pause and think. Better yet, know your talk so well that you won’t stumble. In my opinion, few things make a speaker look more amateur than constantly saying “ah,” “um,” “like” or “you know,” so cut it out if you’re serious about speaking.

2. Don’t get obsessed with your notes. Occasionally checking your notes is fine, but referring to your notes too often is the best way to tell your audience you’re not prepared. If you need to read your talk, then print it out and pass it around because I’d rather read a message myself then have a speaker do it. Practice, learn your talk, get comfortable with it and stop constantly looking down and checking your notes.

3. Don’t let unexpected things throw you off-balance. I’ve spoken to live audiences hundreds of times, and problems happen more often than you think. The sound goes out, lighting glitches happen, microphones cut out, there’s a crazy person in the audience or more often there’s a technical problem using PowerPoint or Keynote. At one event a set piece fell over on the stage during my talk. Always expect the unexpected and don’t let it ruffle you or throw you off. Make a joke about it and move on.

4. Be very careful about using PowerPoint. Read the book Give Your Speech, Change the World: How To Move Your Audience to Action. It begins with a simple premise: Become a good speaker first, and then add PowerPoint if necessary. Too many inexperienced speakers go straight to using presentation software, and it hurts the presentation. They end up spending all their preparation time looking for slides, writing the text and getting the order right when they should be using that time practicing their speech. Hold off on using PowerPoint or Keynote, and focus your time on becoming a great speaker first.

5. Make eye contact with the audience. I attended a church recently where the pastor never looked at the audience. It was very curious, but more speakers than you think avoid eye contact with the people in the seats. They look at their notes, stare at the floor or lock in on the wall behind the audience. I understand it because it took me awhile to overcome being distracted by the facial expressions of audience members. But if you’re going to connect with the message, you need to connect with your eyes. Look at the audience just as if you were talking to a friend. Without that relationship, you won’t make an impact.

6. Make sure your speaking voice is the same as your normal talking voice. I have a friend who has a very nice voice, but the minute he begins speaking to an audience, he switches to the deep promotional sound of the classic radio voice. Other people speak with a monotone and exhibit very little emotion. This comes with practice, and sometimes you do have to project your voice, but as much as possible make sure it’s your voice, not some made up voice that you think sounds dramatic or important.

7. Don’t get stuck behind the podium. Too many speakers look like they’re bolted to the floor. Great speakers move, use expressions and speak physically as well as vocally.

8. Make sure you connect with the audience. Although there will always be audience members who fall asleep or look disinterested and bored, be on the lookout for large numbers mentally checking out. This is really about knowing your audience and understanding their expectations. I always do my best to find out ahead of the event who’s in the audience, what their interests are and why they came. Certainly you want to give them more than they expect, but start with meeting their expectations.

9. Don’t lose your place in your presentation or in your notes. There are numerous ways to avoid this, and the best is simply to know your presentation. But if you’re developing something new and need your notes, think about printing them in a large font that’s easy to read. You should also abbreviate or outline so you’re not wrestling with many pages—in fact, some speakers experiment with colorful circles, arrows and other indicators. As you practice, look away from time to time and then back to see if you can easily find your place again in your notes. Getting lost is a strong signal that you’re not prepared, and you’ll quickly lose credibility.

From Outreach Magazine  When You Feel Alone

10. If the audience looks bored or people start leaving early, you’re in trouble. Of course, this is your worst nightmare, and if it happens in big numbers there’s no real fix because it’s simply too late. Either you’ve missed their expectations or not been interesting or professional enough for them to stick with you to the end. My advice is more practice. Go back to the beginning of this list and start over before your next talk. (And limit the length of your talk.)

Bonus: I have to admit that even after speaking at hundreds of keynotes, workshops and other sessions, I still don’t fully understand audiences. Sometimes I’ll see people who look absolutely bored (even angry), but after the talk they’ll come up in tears telling me how my message changed their life. Others who are on the edge of their seat during my talk, quickly walk out the door as soon as it’s over. So understand there will always be outliers that you won’t figure out. However, it’s the larger group that should be your focus. Do your jokes get a laugh? Is the audience attentive during your serious moments? Are they taking notes?

If you can win the greater group, and do it with consistency, then you know you’re on the right track.