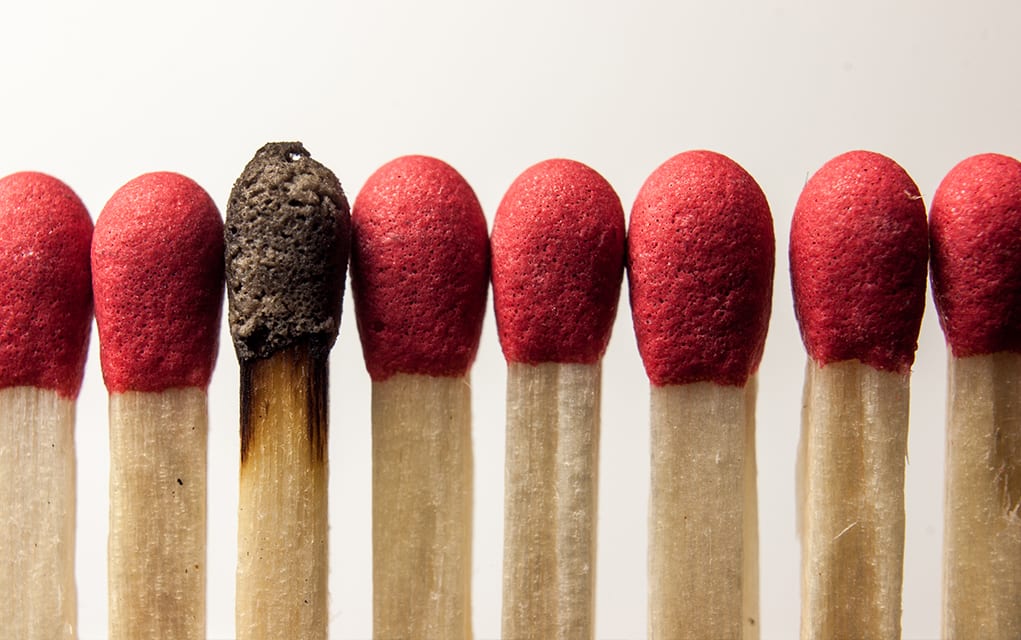 Here are ten insights I gleaned when I experienced a season of burnout that will help you walk through it.

Burnout is almost an epidemic among leaders today, and burning out is increasingly common among people who don’t even consider themselves leaders.

It’s no longer just reserved for over-40 leaders either.

Even young leaders are burning out. No longer is burnout an “I’ve been at this too long” kind of phenomenon.

So what happens if you burn out?

Can you come back?

Will you lead again?

Can you thrive again?

It was the first time my fatigue pushed me over a cliff and left me unable to get back. It was more than physical exhaustion … it was emotional exhaustion. I had led for 12 years, but clearly, I had not processed my leadership properly. My first decade in leadership pushed me past the brink of burnout.

If you want more about my story, I write about it in detail in my best-selling book, Didn’t See It Coming. Maybe your spouse or best friend saw your burnout coming, but usually the person who burns out doesn’t.

Personally, I’ll never forget the depth of the despair.

And yet, a full twelve years later, I have never felt better, never felt more alive, and never been more productive in my life.

Here are 10 ways my burnout changed the way I lead, and 10 insights that can help any leader lead better (whether or not you’ve burned out).

1. Limits Exist for a Reason.

As a young leader, it’s so easy to think limits don’t apply to you. In some ways they don’t.

People kept telling me I would burn out.

I thought I was invincible—and I was so wrong.

I have a much greater respect for God-given limits: limits for how much I can do, what I should be involved in, and even how much sleep I need.

I’ve discovered that when I respect limits, I ironically get far more accomplished. The desire to burn through all limits many leaders feel is, in the end, counterproductive.

2. God Is Still Present, Even When He Feels Absent.

There were months where I simply went through the motions—praying, reading my bible and following God as best as I could, even though I felt nothing.

There were moments in which I felt there was no way God could be present because clearly I had failed him, or I wouldn’t be feeling the way I did.

But that simply isn’t true.

God was very present when I was burning out. In fact, he was doing some deep work in me: prodding, shaping and refining who I was. You could even argue he was preparing me for what was ahead.

Did it have to be as painful as it was? Of course not. Had I listened earlier and heeded the warning signs, I probably wouldn’t have burned out.

But God is sovereign, and his faithfulness doesn’t depend on me.

God is still present … even when he feels absent.

3. Your Unresolved Past Will Sink Your Future.

My wife had urged me to go to counseling for a few years before I actually went. I was too proud to go.

The truth is we all struggle with unresolved issues. The sooner you deal with them, the better everyone around you is.

Your unresolved past will sink your future, unless you deal with it.

A mentor once told me that ministry is a series of ungrieved losses. He was right.

Think about how much loss is involved in leadership. Someone leaves your church. A staff member quits. A decision doesn’t go your way. You lose a friend.

Many leaders pretend it doesn’t hurt when the reality is it does.

Worse than that, we don’t know what to do with our losses. So we just go back to work.

For years when I read the scriptural stories of how people grieved, I thought to myself, “What’s wrong with these people? Why did they take 40 days to grieve the death of Moses? Couldn’t they just get back to work?”

Little did I realize that taking the time to grieve your losses is one of the healthiest things you can do.

I spent an inordinate amount of time in August 2006 crying. It’s like all the losses I ignored for decades couldn’t stay inside anymore. And once they left I found closure, even healing.

Now, I pay much more attention to feelings of loss. I pray about them. I process them. Occasionally I do shed tears over the deeper ones. And then I move on.

5. If God Wants to Go Deep, It’s Because He Wants to Take You Far.

The #1 question I had in the middle of my burnout is will this ever end?

It took me three months to start functioning semi-normally again. Within a year, I was at 80 percent. But it took a full 5 years to be at 100 percent normal, which wasn’t the old normal, but a new normal (the old normal would have landed me back in the ditch again).

I realized God was doing some soul surgery in me that went very deep. I believe he wanted to get to the root of some heart issues that would have held me back from doing what he wants to accomplish with my life.

Over the last few years, I’ve been able to encourage other leaders going through burnout, spending some time to pray and talk with them, sometimes at length.

The question they always ask is this: when will this be over? All of us A-types want burnout over quickly.

My standard answer these days is “Don’t rush it and don’t delay it. Let it take as long as it takes.”

There’s a promise underneath the pain. If God is doing surgery, it’s because he wants to bring healing.

It’s also a sign of his love. If God wants to go deep, it’s because he wants to take you far.

6. Your Heart Will Heal and You Will Trust Again.

Your heart gets mangled in leadership because you:

• Trusted people who betrayed that trust.
• Hoped only to have your hopes dashed.
• Believed only to discover what you were hoping for never happened.

That’s the natural stuff of leadership. But in the process, your naiveté and innocence are lost.

How do you thrive long term when leadership can be disappointing?

For me, it’s a combination of realism and optimism. Yep, it can be hard. Yes, there will be disappointments. But despite that, I will believe again. I will hope again. I will trust again.

Here’s something I’ve discovered: Leaders who thrive see life for what it really is but keep their hearts fully engaged.

7. Your Emotions Eventually Catch Up to Your Obedience.

When you’re burnt out, your emotions stop working properly. You sometimes feel nothing. Or you feel a deep despair. And at other times, you feel emotions but they are not proportionate to what is going on around you or what you should be feeling.

From Outreach Magazine  Hope in the Wake of Sexual Sin

I think a lot of leaders simply quit because their emotions have stopped working.

What I’ve learned is that obedience is greater than my emotions.

I stayed in ministry because I believe God had not released me from my calling. So I just obeyed.

The amazing thing is, eventually, your emotions catch up to your obedience. As you get healthier, the emotions begin to work the way they should. Sometimes they work better than they ever have.

Prior to my burnout, I worked on time management.

Since I burned out, I still work hard on optimal time management, but I’ve discovered a much better approach: energy management.

Your energy waxes and wanes throughout the day. Rather than fight that, I’ve learned to cooperate with it. I’ve discovered that there are probably 3–5 hours a day when I’m at my best (for me, that’s usually in the morning).

I’ve moved all my most important work to those hours when I’m at my best.

Doing what you’re best at when you’re at your best unlocks a world of potential many leaders miss.

I write more on how to manage your energy here.

9. Sleep Is a Leader’s Secret Weapon.

Now, I guard my sleep zealously, when I’m at home or on the road. I’ve embraced naps. And I watch my fatigue levels like a hawk.

I’ve come to realize that most of us are like our phones. You start off in the morning with 100 percent charge and at various points in the day, you need to be plugged back in.

A quick nap at lunch can recharge me for a few hours. Getting 7–8 hours of sleep every night has become essential for me to perform at my best at work and at home.

10. Your Best Days May Actually Be Ahead of You, Not Behind You.

Here’s some hope for anyone struggling with burnout.

When I was burning out, I was mostly convinced my best days were behind me. With a decade’s distance from my burnout, I can see that wasn’t true in the least.

I came back from burnout, and I’ve accomplished more in the last 10 years than I ever imagined was possible.

I planted a church that has grown into the largest church I’ve ever been a part of.

People told me all through my 30s that I should write a book. I never did. In the last 9 years, I’ve written four.

My blog has grown to millions of readers a year, I launched a weekly leadership podcast, and I’ve had the chance to speak all over the world.

If you had told me God would open up doors like this when I was in the depth of my burnout, I would never have believed it.

I’m not sure I could have handled what God brought my way before I burned out. There were things he needed to do inside me before he did things through me. I see that clearly now.

The point is simply this: If you’re burning out, keep moving through it. Maybe your best days are ahead of you, not behind you.

Carey Nieuwhof is a former lawyer and founding pastor ofConnexus Church in Toronto, Canada. He’s the author of several best-selling books, including Didn’t See It Coming: Overcoming the Seven Greatest Challenges That No One Expects But Everyone Experiences. This article originally appeared on CareyNieuwhof.com.