Home Features The Quiet Church-Planting Movement in the Global South 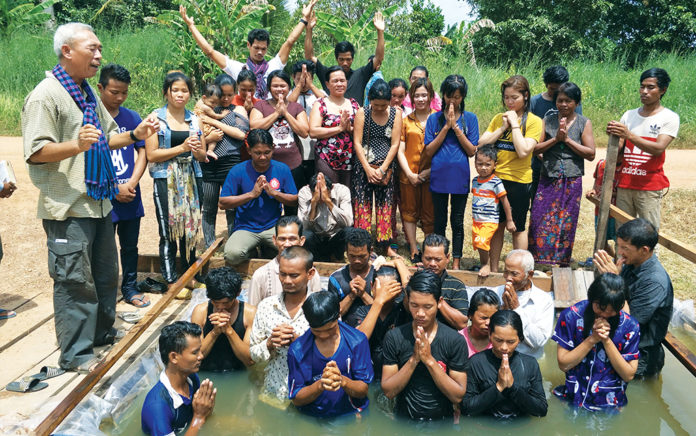 What its surge tells us about what multiplying churches can do

Panha, at 19 years old, is very passionate when it comes to sharing her Christian faith with her family and friends in rural north Cambodia. Several years ago, her mother had brought her to church, thinking that she could trick the “Jesus people” into giving her family rice to eat and praying for family illness to be healed. The small church freely shared its resources, but it also shared about Jesus.

While her mother has not yet come to faith, Panha attended various church-sponsored youth events, learned much about the one true God and gave her heart fully to Jesus Christ. Today, her peers refer to her as “the young evangelist.”

Church planters Soeuth and Syna Lao literally cannot keep up with Christian growth opportunities like that. “Many ask for discipleship classes, but we can do only so much with so many new believers,” Syna explains. “As more helping hands emerge, we could easily start two or three new classes in each village.”

Cambodia is overwhelmingly Buddhist, with Christianity representing less than 2% of the overall population in a nation of 17 million. The Khmer Rouge’s genocide of 1975–1979, which popularized the term “killing fields,” included brutal efforts to eradicate all religion. Yet the Laos have seen such an incredible response to the gospel in the heart of where so many mass executions were orchestrated that they named their blog “The Living Field.”

Most Westerners think of the gospel as being birthed in Jerusalem and then moving primarily west into Europe, as Paul’s missionary journeys represent. Yet historians tell us it also moved south into Africa and east into Asia, as scholar Philip Jenkins chronicles in The Lost History of Christianity.

“If early Christians could reach Ireland, there was no logical reason why they should not also find their way to Sri Lanka,” he comments, noting that the travel distance is roughly the same. He also observes that the followers of Jesus were first called Christians in Antioch (Acts 11:26), a city on the Silk Road trade route to Asia, along which the gospel began to spread and grow. History likewise records that the gospel traveled into Africa especially down rivers such as Egypt’s Nile and Tunisia’s Medjerda.

From Outreach Magazine  Discipleship: Are We Hosts or Producers?

Fast-forward to today. The name of Jesus is claimed more in the Global South than in North America and Europe. Which continent is set to become the global center of Christianity for the next 50 years? Africa, according to Pew Research. Africa now has more people who profess to follow Jesus (631 million) than does South America (601 million), but also more than Europe (571 million), Asia (388 million), North America (277 million) or Oceana (29 million), according to the Center for the Study of Global Christianity.

That translates to 68% of Christendom being people of color today. By the year 2050, more than half of the world’s Protestants will live in Africa, according to GlobalChristianity.org.

Where has all that growth come from? Church planting plays a major role. New churches unequivocally baptize more people per attendee than do established churches.

As missiologist C. Peter Wagner’s 1990 book Church Planting for a Greater Harvest popularized, “The single most effective evangelistic methodology under heaven is planting new churches.” More recently Tim Keller explained at GospelInLife.com, “The vigorous, continual planting of new congregations is the single most crucial strategy for 1) the numerical growth of the body of Christ in any city, and 2) the continual corporate renewal and revival of the existing churches in a city.”

We North Americans can explain it, but globally it seems that God has been leading tens of thousands of churches to do it far better than we are. Many overseas new churches are birthed spontaneously, simply a natural outworking of the forgiveness, joy, peace and excitement that accompanies people’s newfound faith. One rural leader from India explained to me that when a family finds Christ, they naturally start gathering with other Christians in their village—and a church is born. Many of those households in turn share their faith with relatives in other villages, some of whom turn to Jesus—and more churches are born. The newest believers then share their faith—and the wave of new churches continues.

Nigeria is one of the countries that is teeming with new churches. The Redeemed Christian Church of God denomination holds an annual convention known as the Holy Ghost Congress during which it ordains new pastors—all of whom had to start a new church as a step toward ordination. At the November 2019 gathering, they ordained 1,855; in 2018 they ordained 1,603, totaling 3,458 new churches in two years, with even more likely this year.

Meanwhile, another large Nigerian congregation, Living Faith Church Worldwide (also known as Winners’ Chapel), was founded in 1983 and has grown to be one of the largest-attendance churches in the country—some 50,000 weekly in a sanctuary that seats 50,000. Yet the church is also big into church planting. Founding pastor David Oyedepo is leading his congregation to plant an additional 10,000 new branches across the country this year. He believes that God has mandated him to fill the earth with churches before Jesus comes.

Each church worker is expected to win 10 souls into the church under “Operation 10, 2020” to fill the new branches.

This church is only a small microcosm of what’s happening all over, a movement that is literally transforming the face of Christianity today: outreach-focused church planting, mostly in the Global South, mostly through small multiplying churches and mostly by indigenous church planters.