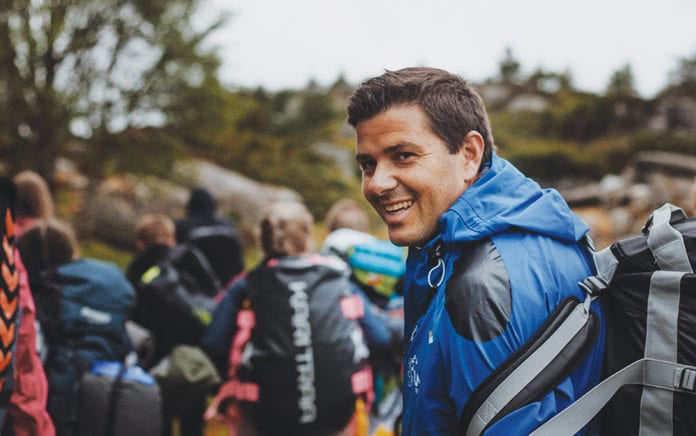 How a thriving church in Norway achieves an almost 80% volunteer rate.

“We shun all the different ‘find your ministry’ tests,” says Øystein Gjerme, a 43-year-old pastor in Bergen, Norway’s second-largest city. “We’ve got to get people’s hearts right and get them serving. Then we help them find their best fit. If we start with finding the ideal ministry, they’ll sit back and wait for the perfect fit—with only a few getting involved.”

Fourteen years ago, Gjerme and his wife, Gina, founded Salt Church Bergen with six couples meeting in their living room. The church today has seven locations, drawing a combined total of some 1,200 adults and children each weekend across 11 services. Among the adults, almost 80% are involved as volunteers at some level. The church has only seven paid staff members, with volunteers leading at every level.

“We believe every person is called and has a gift. Our job is to draw out the most potential from the raw material there,” Gjerme says.

Church leaders have worked hard to create places where everyone can participate at whatever level they’re willing to contribute. Using a sports analogy, Gjerme says, “We have a champions league, an elite league, a top league and more. Different leagues all get to play; otherwise we’re limited to the superstars.”

This approach goes far deeper than the creation of multiple entry points through the resource campuses and community campuses—of which there are many options. Currently the church has two well-established resource congregations with a third currently being planted. Four community churches and the original campus in Bergen host four congregations, plus the church launched an international congregation.

“The structures of belonging have changed dramatically in our denomination and in our country,” Gjerme says. He describes Europe today as a late-modern context, what North Americans call postmodern. He believes this culture of highly educated, self-sufficient, socially disconnected people with no religious moorings needs to influence how we approach church today.

The biggest difference? “Late-modern Europeans cannot be ‘owned’ by a religious leader,” he says. “They don’t do something because someone in spiritual authority says they should. Instead, you have to invite them.”

This idea of constant invitation has influenced even the name of the church. Salt Church reflects a desire to build a salt-of-the-earth church where God’s people influence the world around them for good, as Jesus described in Matthew 5:13-16.

“We cannot sit in buildings and wait for people to come. When we are in community with people only then will we draw them in,” Gjerme says, adding that seeing the church as different circles is a helpful way to let people be in charge of where they’re going. “They select where they want to be.”

The innermost circle—“Members”—is made up of leaders. These people have made commitments to develop their personal life with God through a faith relationship with Jesus Christ and to develop their leadership gifts. At present 304 people are registered as members.

The next circle is “Partners,” people who have expressed a willingness to grow through worship, participation in ministry, financial giving and being part of a small group. The final circle is “Friends.”

“It’s your decision to place yourself at a point of commitment. People say, ‘I want to commit.’ We then affirm their ‘yes’ rather than shaming them for not having margin to get involved. We help people discover that they have freedom to become involved,” says Gjerme.

At present the church has 749 registered volunteers (including Members), which is almost 80% of the attendance.

“We do all our recruitment from the fringes, and we continually invite people to move toward the center.” In that way, “‘outsiders’ become the ‘insiders’ in the kingdom of God.”

At each Salt Church location, discipleship is the process of moving people toward the center.

Salt Church is built on two pillars, according to Gjerme: services on Sundays and life groups on Wednesdays. “We believe that life as a Christian should be lived out on an everyday basis. In our life groups, we meet in homes to share our lives and faith in Jesus. We read the Bible and pray together.”

He feels that Christianity has developed too many structures of one-way communication—such as the traditional Sunday sermon—that by themselves don’t address all the needs of today’s late-modern person. “We use the small group as an arena for people to reflect, to give feedback, to ask questions and to talk about the things that are important to them,” he explains. Typically these groups are gender based and meet weekly or every other week.

“Discipleship needs to happen in the atmosphere of a loving relationship. None of us are finished. It’s a lifetime of maturing in Christ,” says Gjerme.

That’s where he is drawn to the idea of hero making, as popularized in the recent book Hero Maker: Five Essential Practices for Leaders to Multiply Leaders by Dave Ferguson and Warren Bird. “Small groups are where a disciple makes another disciple,” he says. “The more we teach people to make others the hero, the more people will be drawn into discipleship.” The emphasis on gift-finding and commissioning into ministry helps make that happen.

“We want to see modern-day disciples be formed, and the more clear we can be about how that happens, the more healthy the church will be,” says Gjerme,

Gjerme is keenly aware that leadership is far more than starting new locations or increasing numerically. “I need to feed off the presence of the Lord, not the results I get to create. Otherwise, a leader’s ideals die, and we burn out,” he says.

With that said, his driving passion remains one of starting new locations that reach a whole different sociological group than the church has targeted in the past.

This seems to be a model with potential to do just that.