Home Features How Do We Explain the Slaughter of the Canaanites? 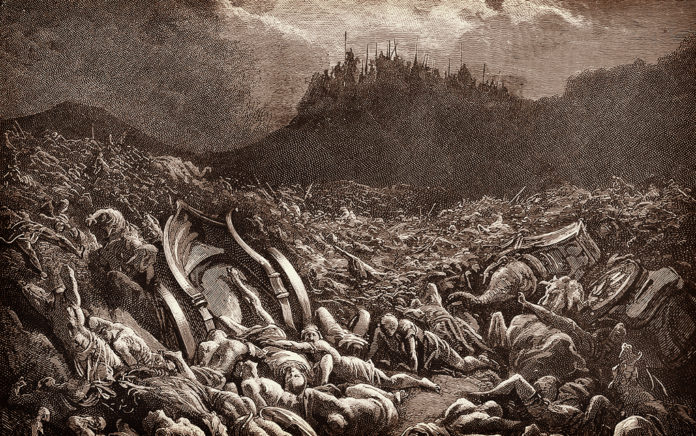 Understanding one of the most difficult topics in the Bible

One of the arguments against the God of the Bible is the kind of God we find in the Bible—specifically, a God who can appear to be a moral monster. Case in point? Let’s take the divinely directed slaughter of the Canaanites. It is what some have called the most difficult and bloody part of the Bible; the one that on the surface is the most ethically troubling.

The narrative is found in the Old Testament book of Deuteronomy. God had led the people of Israel out of slavery and out of Egypt. He was not only forming them into a new people and a new nation, but also taking them to a new land that would become known as the Promised Land. But it wasn’t just to be given to them. They had to take it, possess it and, at times, conquer it. And that’s what brings us to one of the bloodiest scenes in the Bible—the slaughter of the Canaanites by the Israelites on the directive of God himself. There are several places where this is referenced in the Bible. Here’s an overview description:

“As you approach a town to attack it, you must first offer its people terms for peace. If they accept your terms and open the gates to you, then all the people inside will serve you in forced labor. But if they refuse to make peace and prepare to fight, you must attack the town. When the Lord your God hands the town over to you, use your swords to kill every man in the town. But you may keep for yourselves all the women, children, livestock, and other plunder.”

(Before you read on, let me just parenthetically add that this was not a license to rape and pillage. It was later detailed that if an Israelite took one of these women, it meant that they were going to have to take them as their wife and treat them with all the respect and decorum that came with that marriage.)

“You may enjoy the plunder from your enemies that the Lord your God has given you.

“ “But these instructions apply only to distant towns, not to the towns of the nations in the land you will enter. In those towns that the Lord your God is giving you as a special possession, destroy every living thing. You must completely destroy the Hittites, Amorites, Canaanites, Perizzites, Hivites and Jebusites, just as the Lord your God has commanded you.

“ “This will prevent the people of the land from teaching you to imitate their detestable customs in the worship of their gods, which would cause you to sin deeply against the Lord your God.” —Deuteronomy 20:10–18

So, was that an indiscriminate massacre, an ethnic cleansing along the lines of Hitler and the Jewish Holocaust or Saddam Hussein’s slaughter of the Kurds? Something that deserves not only universal condemnation, but a complete rejection of the God of the Bible? Or is there something more here?

First, this was more than just an invasion or conquest. This was God’s planned punishment of the people of Canaan for their ways, long in the making and in the coming. Yes, God was displacing them from the land to give it to the people of Israel. But that displacement came because of their ferocious, habitual, unrepentant wickedness. And I do mean wickedness. The Canaanites were marked by the worst possible aspects of slavery (Not that there’s anything good about slavery, but think of taking slavery to the darkest place that you can possibly take it.), religious prostitution and sexual cults. Scholars have called the Canaanite cult religion the most sexually depraved of any in the ancient world. They had given themselves over to every kind of sexual depravity, including incest and even bestiality. At their worst, their orgiastic worship of idols even included human sacrifice—both of children and adults. There’s imagery of their cult sexual practices of bathing themselves in blood.

From Outreach Magazine  Try This: Stage a Drama on Halloween

The Bible says that God had been tolerating this for more than 400 years. Their wickedness kept increasing and increasing and God kept enduring it. Four hundred years of restraint and patience. Why? Because no matter what you’ve heard, judgment is always God’s last resort. But the wickedness reached a point where Scripture talks about how God couldn’t stomach it anymore and He vomited them out of His mouth. What stands out in the Bible is not God’s acts of justice, but how much He is marked by mercy; by restraint. But this was a time when God determined that there was no other recourse but divine judgment.

Second, this was a divine, God-ordained action. In other words, it was God’s call to make. Not only the punishment, but the possession of the land and who He was going to give that land to. Israel didn’t have an inherent right to the land. Neither did the Canaanites. But God did. He could give it to whomever He wanted. So if someone says, “I can’t believe God kicked the Canaanites out and gave away their land.” What do you mean “their”? Israel had no inherent right to it. The Canaanites had no inherent right to it either. This was God’s land. He made it. He could do with it whatever He wanted to do. Israel would never have been justified in doing this had God not ordered it. But God did. So don’t think about this as a simple invasion of one nation into another. Or a strong army beating a weaker army, as if strength or desire gives anyone the right to be aggressive. You’ll never find that in the Bible. This was God saying: “I’m telling you, this land is now yours. It is not theirs.”

But there’s a third point to make here, and it’s about that phrase “destroy every living thing” in the cities. You read something like that and you think that sounds over the top and unnecessary even for divine judgment. But as we read, this was for the cities, not the outlying areas. This is a critical point. In the culture of the ancient near East, most people lived in outlying areas, not the cities. The cities were military fortifications for soldiers and military officers. It’s not where the women and children, farmers and laborers lived. So in terms of warfare, this was not about civilians. Also, in terms of the ancient language of the day, even destroying everyone in the city was common hyperbole. It wasn’t about literally taking every life, but ensuring that the war was won, the enemy defeated, the task accomplished. Think how in our day we talk about how a team blew their opponent away, or slaughtered them, or annihilated them. It’s a form of rhetoric. When you study the language of the ancient near Eastern cultures, this was very common. They would talk about how they destroyed every man, and then later talk about what they were going to do with their survivors. In other words, destroying everything meant winning decisively, not literally destroying everything. This was more about purifying than purging.

From Outreach Magazine  Finding Significance as a Leader

That brings up the final point to remember in all this—one that is unavoidable. It’s the idea of God’s wrath. And that may be what bothers us the most. That God is a God who is angry with evil, at war with evil. He is livid with evil. But why does that bother us so much? I once read some penetrating words on this from Yale theologian Miroslav Volf. He was born in Croatia and lived through the nightmare years of ethnic strife in the former Yugoslavia—a time that included the destruction of churches, the raping of women and the murdering of innocents. He once thought that wrath and anger were beneath God, but he said he came to realize that his view of God had been too low:

“I used to think that wrath was unworthy of God. Isn’t God love? Shouldn’t divine love be beyond wrath? God is love, and God loves every person and every creature. That’s exactly why God is wrathful against some of them. My last resistance to the idea of God’s wrath was a casualty of the war in the former Yugoslavia, the region from which I come. According to some estimates, 200,000 people were killed and over 3,000,000 were displaced. My villages and cities were destroyed, my people shelled day in and day out, some of them brutalized beyond imagination, and I could not imagine God not being angry. Or think of Rwanda in the last decade of the past century, where 800,000 people were hacked to death in 100 days! How did God react to the carnage? By doting on the perpetrators in a grandfatherly fashion? By refusing to condemn the bloodbath but instead affirming the perpetrators’ basic goodness? Wasn’t God fiercely angry with them? Though I used to complain about the indecency of the idea of God’s wrath, I came to think that I would have to rebel against a God who wasn’t wrathful at the sight of the world’s evil. God isn’t wrathful in spite of being love. God is wrathful because God is love.”

This article originally appeared on ChurchAndCulture.org and is adapted from Christianity for People Who Aren’t Christians (Baker) and reposted here by permission.

On the depravity of the Canaanite cult religion, see “Canaan, Canaanites,” Baker Encyclopedia of the Bible, Vol 1, ed. by Walter Elwell.

Miroslav Volf, Free of Charge: Giving and Forgiving in a Culture Stripped of Grace.