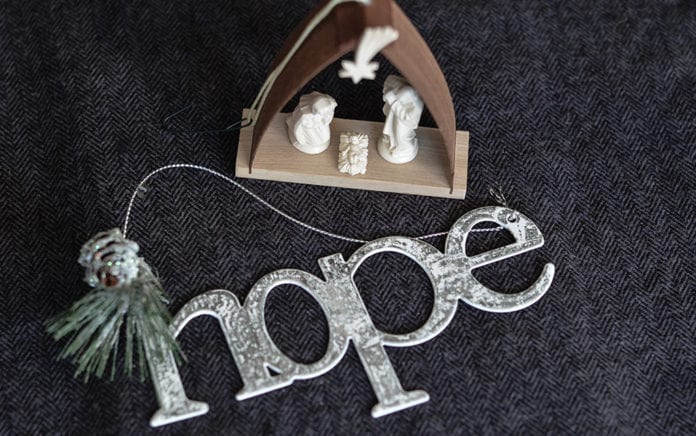 Christ’s birth brings the promise of the peace that we so often lack in our lives.

One of my favorite Christmas carols is “I Heard the Bells on Christmas Day,” from the poem “Christmas Bells” by Henry Wadsworth Longfellow. The American poet was at the peak of his success when he wrote those now-familiar words. Abraham Lincoln had just been elected to the presidency, and there was a great sense of hope in the nation.

But things turned dark for America and for Longfellow personally. The Civil War broke out, and Longfellow’s wife died in a tragic fire. Longfellow had been so severely burned himself when he tried to save her that he was unable to attend her funeral. In a journal entry on his first Christmas without her, Longfellow wrote, “How inexpressibly sad are all holidays.”

The next year he wrote in his diary, “A merry Christmas say the children, but that is no more for me.”

In 1863 Longfellow’s son joined the Union army and was severely wounded, returning home in December. There was no entry in Longfellow’s diary that Christmas. But on Christmas Day, wanting to pull out of his despair, Longfellow decided to express his feelings with a poem. He wrote,

“I heard the bells on Christmas Day
Their old, familiar carols play,
And wild and sweet
The words repeat
Of peace on earth, good-will to men.”

No doubt thinking about his country, his wife who had died, and his badly injured son, he continued:

But then, gaining an eternal perspective, Longfellow penned this conclusion:

“Then pealed the bells more loud and deep:
‘God is not dead, nor doth he sleep;
The Wrong shall fail,
The Right prevail,
With peace on earth, good-will to men.’”

Even today, I think Longfellow speaks for many. The holidays are a sad time for a lot of people, especially those who have lost loved ones, are in pain or have a broken family. And the poet’s words certainly apply to our world today: “For hate is strong and mocks the song of peace on earth, good-will to men!”

With all of the busyness and celebration of the birth of Jesus Christ, we very easily can lose God in the midst of it all.

I heard the story of a little boy who went to a church near his home, where numerous candles were lit. He didn’t understand what this meant and thought it must be a birthday celebration for Jesus, like candles on a birthday cake. So he proceeded to blow out all the candles and sang “Happy Birthday” to Jesus. The minister, however, didn’t think this was cute; he thought it was irreverent. He told the boy’s mother what her son had done and then asked to speak with him.

Trying to impress on the boy that God is in the church and that it’s a holy place, the minister asked, “Son, where is God?”

The little guy didn’t know what to say.

Again the minister asked, “Where is God?”

From Outreach Magazine  How to Lead Imaginative Prayer

Still, the boy didn’t have an answer.

The frustrated minister raised his voice and posed the question a third time: “Where … is … God?”

The terrified boy cried out, “Mommy! They lost God in the church, and they’re blaming me for taking him!”

In recent years there has been an attempt by some to do away with the phrase “Merry Christmas” and replace it with “Happy Holidays” or something else. They have done their best to get rid of Nativity scenes and the mention of Christ.

But fortunately there has been pushback on that. A recent survey revealed that 68 percent of Americans prefer “Merry Christmas” to “Happy Holidays.” In fact, I think we should step it up and say, “Merry Birth of the Lord and Savior Jesus Christ Day.”