Home Features Get a Shot for Your Neighbor 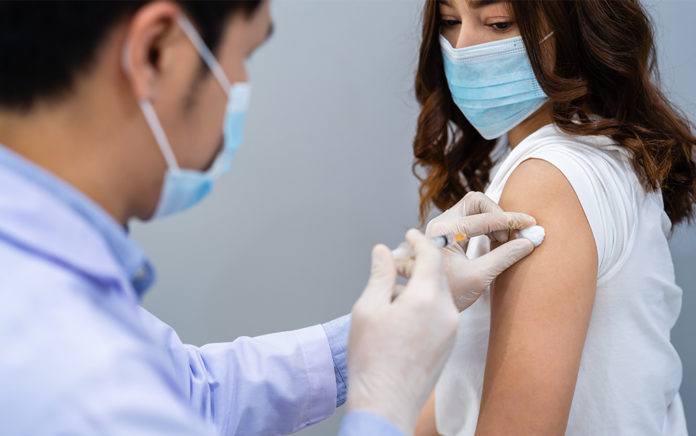 If not for yourself, get the vaccine out of love for your neighbor.

According to multiple polls and surveys, there is one group that stands in the way of current vaccines achieving victory over COVID-19:

Currently there are approximately 41 million residing in the United States, and in late February about 45% said that they would not get the vaccine. This is a sizable enough number of people to prevent herd immunity and guarantee the spread of the virus and the state of the pandemic, not to mention the ongoing rise in the death toll.

I can’t begin to tell you how deeply this disturbs me. I am white, and I have in the past felt comfortable calling myself an evangelical Christian—though what the word evangelical represents today is different than when I first embraced it. These days I find myself increasingly saying that I am simply a biblical Christian who stands in the stream of historic Christian orthodoxy.

But back to vaccinations.

To hear that the problem of our day is any set of Christians, instead of hearing that they are the solution—the blessing, the answer, the heroes of our day—is troubling to me. That any group of Christians are the ones standing in the way of ending the death, the economic carnage, the disruption of community that has wreaked havoc on our world for the last 14 months is, again, troubling. As Christians, we are the ones who say we follow a Jesus who taught us to love our neighbor and do unto others as we would have them do unto us. Whether to get a vaccine that has tested both safe and efficacious is not a private matter, but a public concern.

So why the reluctance? False information. Which is why so many evangelical leaders have been going as public as possible to combat the social media feeds shaping the minds and hearts of their fellow Christians. So, for whoever may need to read this, here is what your social media feeds may be telling you about why you shouldn’t be getting the vaccine, and why those social media feeds are wrong.

It’s the mark of the beast.

Faith will save me. I don’t need a vaccine to save me. Jesus has saved me.

Yes, I hope that Jesus has. But to lay claim to Jesus saving you from the virus when there is a vaccine available is called presumption, and it is the testing of God that is uniformly condemned in Scripture.

If God wants me to die, I’ll die. It’s all predetermined.

God has given you a free will. He also interacts with your life in accordance with how you use it. It’s like someone saying: “Why bother praying? God is going to do what God is going to do.” Yet what God has decided to do is to take prayer into account. He’ll take vaccines and every other common-sense way of doing life into account, too.

What? Are we talking about a Netflix movie or actual facts? This is simply not true. Give me a non-conspiracy based mainstream medical source. Even one. (You won’t find it.)

Listen, it’s one thing to note how medicine has evolved in its understandings and self-corrected over the years, the greed in certain pharmaceutical companies as evidenced by such things as the opioid epidemic, and even the varying competence of doctors and the medical schools that produce them. But to wholesale discount the established science of the medical world, the leading schools and research entities such as the Mayo Clinic and Johns Hopkins, the CDC and the WHO, is just a combination of foolishness and personal arrogance. They are not infallible, but they are highly competent. And they know more than you do.

From Outreach Magazine  Barna Research: Why Do Christians Regard Sharing Their Faith as Optional?

God designed the body to heal itself, so I’m trusting in that. I just need to take the right nutrients.

God also gave human beings minds and the ability to develop culture and civilization, science and knowledge. Could it be that we are to thank God for that and, as a result, the vaccine? Oh, and by the way, how many of those nutrients that you take were manufactured in a lab?

There is no virus. It’s all a hoax.

Tell that to any front-line worker. Tell that to any epidemiologist. Tell that to the leaders of the nations of the world grappling with its impact. Tell that to the one out of every five people who have lost a friend or loved one in the United States alone. And before you say, “Well, they had pre-existing conditions, it wasn’t really COVID…”, ask yourself if you believe that to be the case for every single death in the world? And even if it was (and it wasn’t), would you want someone you loved to die earlier than they would have from a virus because of a pre-existing condition?

I’m young and healthy, so I’m not really at risk.

It’s.Not.About.You. It’s about how we need to stop the spread and stop the mutations. You may get it and weather it just fine, but in the process, you may pass it on to countless others who will not weather it.

People have died from taking the vaccine.

This is not true. There is no evidence of anyone dying as a direct result of taking the vaccine. What is true, according to the CDC’s Vaccine Adverse Event Reporting System (VAERS) is that out of the millions and millions of vaccinations, just over 900 people died after receiving it. Within a certain timeframe, that has to be reported. But that does not mean they died from the shot. To date, there is no evidence that anyone has. So, what makes up the 900-plus deaths? Examples include such things as people getting into a car crash on the day of their vaccine. That still has to be reported to VAERS. So, the alarming stories of hundreds of deaths are terribly misleading. People die every day from car accidents and heart attacks, and many of them shortly after taking a vaccine. Or getting a flu shot. Or eating at Cracker Barrel. But that is very different than dying because you did one of those things. Well, maybe Cracker Barrel. I’ve had to come and lie down after eating breakfast there many times. Those biscuits …

I want to wait for more data.

The approved vaccines have been vetted and approved by every agency that grants approval. There isn’t a last-round approval coming. Each has been deemed, by every test and every agency, to be both safe and effective. There’s no more data to come that is relevant as to whether to get the vaccine or not. Yes, the process of getting the vaccines was quick, but that was not due to shortcuts in testing but the removal of bureaucratic slowdowns.

Everything about this pandemic—the lockdowns, the restrictions, the masks and now the vaccine—is all about the government wanting to control things. Not getting the vaccine is my stand against the overreach and the oppression.

The politicization of everything has been the bane of our world for the last several years, and the pandemic only exacerbated it. But we’re talking about a virus and a vaccine that could save your life and the lives of millions of others. This isn’t a political football we’re tossing around here. It’s not oppressing to take the vaccine, it’s actually about what will lift us from what has felt oppressive for the last 14 or so months.

I’m supposed to have faith over fear and taking the vaccine would be giving in to fear.

Let’s run with that and apply it in other areas. As in, next time you get in your car, don’t wear a seat belt. Oh, and don’t put your infant in a car seat. After all, you live by faith, not fear. So, don’t do anything to self-protect or to protect your loved ones. Think. You wouldn’t apply that line of reasoning to any other area of your life, would you? You buckle those seat belts and you put those kids in car seats. So why are you arbitrarily “faith over fear” with a vaccine?

It’s my right not to get the vaccine.

Yes, it is. But this isn’t about rights, but responsibilities. And specifically, the responsibility of Christians to lead the way to serve others and prioritize the sanctity of human life.

Why should I trust science? They believe in evolution.

You will have to help me understand what accepting or rejecting the theory of evolution has to do with the science of epidemiology.

I don’t know what to say to this except you have been severely misled and misinformed. You are not getting your information from any respected, credentialed, accredited member of the medical community. And further, you are contributing to the ongoing and future spread of diseases—not just COVID, but things such as measles.

I don’t want anyone to tell me what to do. They’re telling me to do this, so I’m not going to do it!

I’m sorry, but this sounds petulant, prideful and belligerent. If you are going to shake your fist at anyone or anything that tells you what you should do, then good luck with your relationship with God.

I’ll let everybody else get the vaccine, achieve herd immunity and then all will be well. They took it, I didn’t, but I get the payoff.

If I can be so bold, that is a selfish attitude born of a stubborn spirit. Neither of which, I might add, reflects the fruit of the Spirit. You are called to be in the vanguard of Christ’s love and service to the world. It’s also akin to the idea of when people say, “They really should do something about that.” You forget that “we” are “they.”

All to say, to all of my dear Christian brothers and sisters, wherever you are, please, for the sake of Christ and for the reputation of his church, out of love for others and the spirit of the Good Samaritan,