Home Features Why Testimony Is the Spark of Revival 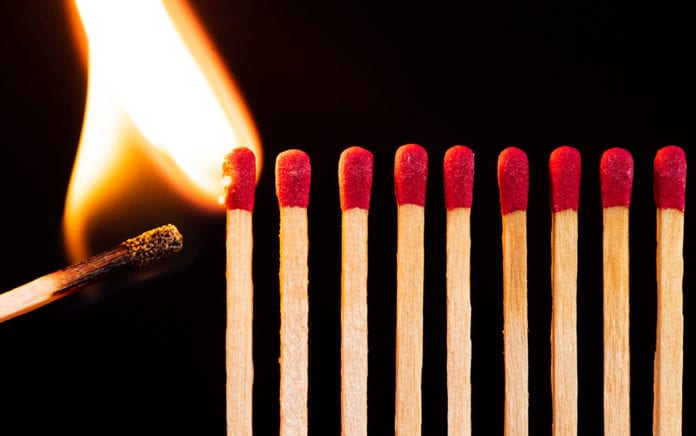 “We’re so concerned about taming our tongues that we’ve forgotten that sometimes our call is to loosen them.”

“It is written: ‘I believed; therefore I have spoken.’ Since we have that same spirit of faith, we also believe and therefore speak, because we know that the one who raised the Lord Jesus from the dead will also raise us with Jesus and present us with you to himself.” —2 Corinthians 4:13–14

Something remarkable happened a recent Sunday.

In the middle of a quiet, respectful service, someone spoke. Not someone on the stage, someone from the “audience.” She responded aloud to what the preacher had thought was a rhetorical question. It was awkward for a moment, but it brought a change to the whole room, the whole service.

Others began to chime in, sharing what makes them despair, what makes them hope. Stories were told of God’s goodness. The prayer time in the middle of the service became a collective expression that gave people goosebumps. During announcements someone called out about a need for prayer, so we prayed right then, which prompted someone else to ask for prayer, so again, we prayed.

More than a moving, one-time communal experience (or even an opportunity for us as pastors to feel like we can measure a positive outcome), it felt like a victory over forces that keep us quiet; an answer to a prayer we’ve been praying for breakthrough. Normally, we’re quiet and well-behaved. But our quietness keeps us wondering if we’re imagining this faith, if we’re alone. We each long to hear that others are longing, wrestling, hoping with us. But we want others to begin to speak.

We’re so concerned about taming our tongues that we’ve forgotten that sometimes our call is to loosen them.

We’re so worried if we’ll have the right words that we forget the Source of every utterance; how to Moses, to Jeremiah, to the apostles, God said, “I will give you the words.”

The spirit that tempts us to hold our tongues tells us:

3. You’re just trying to draw attention to yourself. That’s not the way of Jesus.

4. Your story is dumb, shameful, insignificant. Who are you to speak?

5. The things you have to say are too subjective or emotional. This isn’t about you.

There are real ways that Christians have spoken out too much. We’ve been too quick to answer, to argue, to kill mystery, to judge. It’s good to be aware of that. But will we overcorrect and say nothing at all? There are sins of omission, and not speaking can be a big one.

The Power of Testimony

Here’s a hopeful way forward: testimony. In our healthy desire to avoid dominating others with our words, we can still speak through story. We don’t have to have all the answers. But we are experts in our own experience of God. We can say, “I don’t know what you think of this or what you believe. All I know is, Jesus has changed my life!” It would feel safer to argue over ideas, keeping our hearts and lives at a safe distance, but it’s more meaningful to risk sharing our stories, telling people how we’re praying or longing or seeing God at work.

Revelation 12:11 promises that we will overcome by the blood of the Lamb and the word of our testimony! We may be familiar with the claim that the blood is our source of power, but Revelation describes a reality in which the accuser is also thrown down because of the ordinary stories of faithful people.

Testimony can mean standing up on a Sunday to tell our story of the first time we came to know God. And some have a dramatic story to tell. But that’s not the only way to testify. In her book, Preaching as Testimony, Anna Carter Florence reminds us of the ancient Christian practice of incorporating human experience into proclamation.

“Testimony contains both a narration of events and a confession of belief: We tell what we have seen and heard, and then confess what we believe about it. Therefore, testimony is not something that can ever be proved true or false; it can only be believed or rejected.” (p. xviii)

That kind of story can be told anywhere: before a crowd of a thousand, in a staff meeting, at a bus stop.

In this cultural moment in which we are hearing reports of the disenfranchised leaving the church in droves, we might be tempted to try to drum up something big in response—something to answer all their questions, fix the abuses in the church, create engaging programs, build movements. It would heal our grief and despair to see a sudden change, and dare I say it, revival.

I’m reminded of a hopeful kind of revival which took place in chapel at Asbury Chapel in Wilmore, Kentucky in 1970. The dean of the college was scheduled to preach but instead of preaching he simply “shared his witness.” Then he opened the floor for others to share what Christ was doing in their lives. It began a ripple effect which continued on through the whole day and into the night, and as people in neighboring areas heard about it, they were drawn to join. As the sharing of testimony continued on into the second and third day, news stations began to report on it so that even more people drove to take part. As one news reporter described it:

From Outreach Magazine  Persecution: One Church, One Family

“‘It all started when one student gave his testimony and that was followed by another, and the testimonies have been going ever since,’ the president of the college at the time described it. ‘A format developed. … A student would give his witness, he’d make his confession and tell how God had brought forgiveness and restoration or how the spiritual need of his heart had been met. As he would speak there would be someone in the audience who would say “That’s like me.” … There was no preaching … only sharing, witnessing.’”

That chapel service of one testimony after another continued on for eight days. And in the weeks that followed, students went to their home churches all over the country, and whenever they told their stories, the effect would be repeated in their audiences as individuals were prompted to share their own testimonies. This movement crossed denominational and state lines, eventually spreading to 120 other campuses across 40 states, touching the hearts of millions of people; all because one person took the risk to tell their seemingly small story. And another person after that.

We’d love to see such a transformative moment in our lives and churches and world. But such things are beyond any one of us to create. What was transcendent about this Asbury experience was simply the spontaneous human expression of need for God, a moment of honesty and transparency, of seeing and being seen. That can’t be orchestrated. The only thing required to begin a transformative moment is our willingness to tell our story of how we need God. To humbly share, even if we’re shaking. It may fall flat the first time and the hundredth time. We will feel foolish, we will wish we had a script, we may lose friends or respect. We may need to speak it to even figure out that we believe it.

And as we dare to tell our story, even the telling of it will reveal to us how limited we are, how fearful and inarticulate we are. Even as we testify to our need for the Lord, the very act will teach us how much we need the Lord. And the miracle will begin as human beings are given an opportunity to watch another ordinary human, glowing with a power beyond their own, speaking with a skill beyond their own, testifying through their words and their very bodies to the miraculous possibility that God can show himself in human skin.

If you long to hear it, are you willing to speak it?