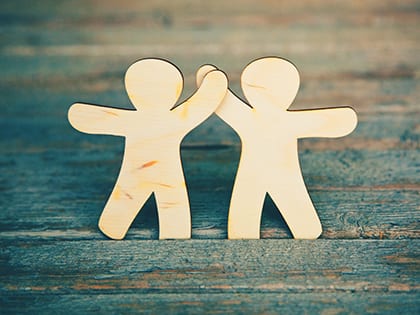 “Do you disagree with someone? Instead of distancing yourself, befriend them. Sit down and listen to them.”

It should be an easy thing to say, right? But so often there’s more that divides us than unites us. More people we argue with on Facebook than sit down for coffee with. More times we shout than listen. More to fight about than celebrate.

I agree. It shouldn’t be so hard to say, but it is.

A few months back, I was at a concert where one of the speakers shouted a statement to the crowd. I honestly don’t even remember what was said, but in response, everyone there—10,000+ people—answered with a resounding: Amen!

10,000 people, 10,000 voices, 10,000 different lives all agreeing on the same thing. It was powerful. I get chills even now thinking about it. Why? Because in today’s divided world, to agree on anything has become foreign.

A topic comes to the surface and we draw our lines in the sand as quick as we possibly can. There’s so much that divides our country right now. That divides our world. We’re so broken. Politically. Culturally. Spiritually. Is it even possible to agree on anything anymore? Or are we divided beyond repair? Maybe.

Question: What if we put as much effort into finding common ground as we do picking apart each other’s arguments? Instead of automatically focusing on what makes us different we chose to celebrate what makes us the same. What if we chose to listen? Chose to respect instead of belittle someone else’s point of view. What if we loved each other as broken, messed up people, not just because we fall on the same side of the political spectrum.

From Outreach Magazine  Should Christians Be Encouraged to Arm Themselves?

Do you disagree with someone? Instead of distancing yourself, befriend them. Sit down and listen to them. It’s harder to hate someone you’ve grabbed coffee with; more difficult to judge when you’ve heard someone’s story, and not just the pretty parts.

Too often we write off people that we don’t agree with as being evil, but is that really our job? Is our job to poke holes in every opinion that doesn’t totally line up with ours? Often we’d rather tear people down than try to understand.

To be clear, this doesn’t mean watering down or changing our views, actually the opposite. If you’re a Christian—dig into God’s Word, continue to grow in your faith, hold on to God’s truth—and if you’re not, be passionate about your convictions, continue to wrestle with the hard questions.

Being lukewarm on every issue isn’t the answer. Understanding is.

That moment at the concert was so powerful because it was a show of unity; everyone agreeing on one thing. For just a moment, all 10,000 of us felt more human.