Home Features What Happens When We Fail to Live In God’s Word? 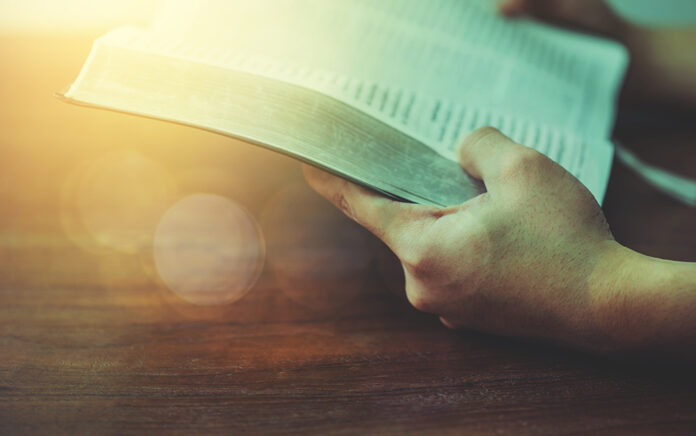 Christians who own numerous Bibles which they rarely open are thumbing their noses at the saints of old who paid the ultimate price.

The Lord never intended for his Word to collect dust on a table in your back bedroom.

People paid for your right to own a Bible in your own language with their very lives.

What are you doing about that?

Christians who own numerous Bibles which they rarely open are thumbing their noses at the saints of old who paid the ultimate price.

This hard-won treasure lies buried under the dust and detritus of your life.

The Lord’s plan calls for his people to live and breathe his word, to read it and receive it inwardly and to think about it regularly and practice it. He intended it to become part of the very marrow of their bones.

Digest it. Assimilate it. Live it. And meditate upon it continually.

He even told people to “Eat this book.”

The idea was to get his Word inside, to digest it as surely as one takes in meat and vegetables for nourishment and sustenance, and to grow thereby.

The image of taking in food and having it become part of your being is an apt metaphor for God’s children receiving the Word and assimilating it into our lives.

Man lives by every word that proceeds from the mouth of God.  Moses said it, Jesus quoted it, and no one has improved on that statement since.

Sadly, too few Christians are living that truth today.

The typical evangelical Christian—in this country especially—has numerous Bibles but rarely takes one down to read.

The consequences of that negligence are horrendous …

1) When God’s people are not living in the Word, their soul may be saved but their minds remain pagan.

From Outreach Magazine  Find Your Voice, Awaken Your Heart, Change the World

The uninstructed Christian will approve that which God has forbidden, will teach what seems right to him, and will put stumbling blocks in the path of the truly righteous.

2) When God’s people are ignorant of the Word, they become sitting ducks for cults and false prophets and nutty schemes.

“These (Bereans) were more noble than those in Thessalonica, in that they received the Word with all readiness of mind, and searched the scriptures daily, whether these things were so” (Acts 17:11).

3) When God’s people do not know the Word, they go after everything that glitters, that claims to be biblical, even when it’s a corruption of the Word.  They respond to gimmicks, glitter and goofballs.

Up the road a few miles from my house is a flashy preacher living in a multimillion-dollar mansion who preaches a prosperity gospel. And because so many of God’s people know so little about the Word, they fall all over themselves clamoring to crawl aboard his bandwagon.

4) When God’s people are starving spiritually, they turn all their focus on the pulpit and place unrealistic expectations upon the preacher.  They are almost invariably frustrated because the pastor is “not feeding us.”

No pastor can be everything to the people which God intends to be. “The Lord is my shepherd.”

5) When God’s people are not living in the Word, even when they do open it, they cannot find their way around in it. Its truths are mysteries, its riches are lost to them, and its instructions go unheeded. They walk in darkness.

6) When God’s people do not live in the Word, they remain carnal.  Their wisdom is worldly, described in James 3:15 as “earthly, sensual, demonic.”  Their lives are governed by the same principles as the unsaved.

Listen to them discuss the things of God and you will hear, “It seems to me” or “I feel.”  You may even hear someone admit, “I don’t know what the Bible teaches, but I know what I believe,” the very height of spiritual arrogance and ignorance.

From Outreach Magazine  This Christmas, Give the Gift of Life Change

7) When the people of God are not living in the Word, the church will lack qualified deacons and teachers and counselors. Members remain as babies.  Hebrews 5 describes them: “For though by this time you ought to be teachers, you need someone to teach you again the first principles of the oracles of God; and you have come to need milk and not solid food.”

If a church is unable to find Godly and mature men and women to serve as leaders, it often compounds its problems by placing immature and carnal people in key positions. Pity the pastor assigned to work with leaders who do not understand faith, think the preacher is a hired hand, judge everything by appearance and numbers, and become authoritative and divisive.

Put another way, living in God’s Word on a daily basis will …

You will not be blown to and fro by every wind of doctrine (Ephesians 4:14).  God’s Word will be like the stabilizers which keep ocean-going ships steady.

You will be established and rooted.  “He shall be like a tree planted by the rivers of water….” (Psalm 1:3).

“Scripture is profitable for doctrine … for instruction in righteousness …” (2 Tim. 3:16).

The 50th Psalm lays it out in dramatic fashion.  God said the people were hating instruction and “casting my words behind them.”  They were supporting thieves and “partaking” with adulterers. Their words were lies and deceitful.  And then, the devastating verdict …

“I will reprove you,” said the Lord. “Now, consider this, you who forget God, lest I tear you in pieces and there be none to deliver …”

This article originally appeared on joemckeever.com and is reposted here by permission.