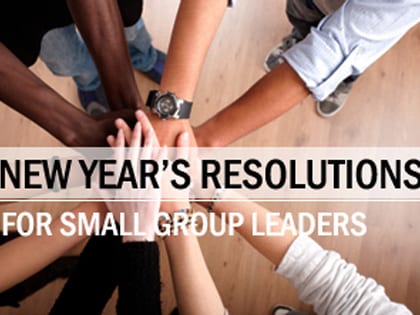 “There’s no guarantee that a small group will work, but I know this: God commanded us to love him and love others.”

I don’t do New Year’s resolutions. Why bother, when you either think you’re perfect already or that you’ll fail by March? That said, I’m going to give it the old college try. However, this isn’t about you getting in shape or staying healthy, but your small group. If there’s power in numbers, maybe small group resolutions are attainable. And if you’re perfect already, you know everyone in your small group isn’t, so read on!

I’ve been involved in small group ministry for about 15 years. I’ve led them, attended them and run from them. Many times, people attend small groups out of religious duty or because they feel it’s what they’re supposed to do to be more spiritual. But even more times, they are really trying to make it work because they long for more connection than a few minutes during the church worship service.

When my wife and I started a second service at our church, we discovered a core group of people who became our team. At that time in our life and ministry, they became our small group. One Sunday, we had a suggestion box for people to write what they wanted to see happen or taught in the coming year. The overwhelming majority of comments had to do with more interaction with people during the week. Wow! Small groups!

So here’s my resolution list as small group leader:

No one likes a phony even when it’s not intended. If you had a bad week, it’s OK as a leader to tell people you had a bad week. You don’t have to divulge all your skeletons at the first potluck, but it’s good to be honest. If you are, others feel free to let down their guard, too. This is how friendships move beyond the surface, and people begin to enjoy spending time together.

From being real comes messy. There might be tears. That’s OK. God created us out of dirt (messy), Jesus was born in a manger (messy), and from Jesus being a carpenter to putting mud in the eyes of a blind man, to dying in the way he did, it seems that God likes “messy.”

From Outreach Magazine  The Courage Required of Visionary Leaders

3. I will put my small group in position to create communitas.

From sociologist Victor Turner, who coined the word: “Communitas is an intense community, the feeling of great social equality, solidarity and togetherness.” Here’s the tricky thing: We can’t manufacture this. Remember the youth group trip when the bus broke down and you all had to push the bus to the nearest off-ramp? We can’t deliberately break the bus (well, we could, but …). We can take risks with our small groups. Put them in position to create those kinds of moments. Your small group doesn’t have to go to China, but it could raise money to send Bibles to China. You don’t have to play in the NFL, but how about doing a high-ropes course together then discussing how your relationships have grown through that experience?

4. I will not settle for being just a social group.

Communitas in the kingdom of God needs to be outwardly focused. God expands his kingdom on earth by using his body—you and me. That doesn’t mean do only outreach; it does mean that as you build intense community, you are always reaching out. Maybe someone has a brother who needs to connect—invite him in. Maybe you go out to eat and tip more than the meal. Maybe you find a homeless man and not just give money, but sit and talk a while. This doesn’t have to be every week or even during your meeting time, but these occurrences should be a regular part of your small group’s life.

5. I will be open to new ideas and not be afraid to ask questions.

If you’re doing a Bible study, don’t just ask questions so you can give the group the answer. Ask questions you don’t know the answers to. Ask about something you’re struggling with. Make people think about what they believe and why. Let people wrestle. God is bigger than any questions or doubts that arise in your group.

From Outreach Magazine  Love God, Care for the Poor—Recovering the Lost Connection

Fun is not fun when it’s forced. If your group doesn’t do goofy icebreakers, don’t do them. Find things your group likes and do them. But don’t be afraid to experiment. A couple of Sundays back, we had a makeshift prayer path set up for service; some people thought it was lame until they did it and loved it and now want to do it again (Whew!). Chances are, your group is together because of some common interests. Be who you are. It’s like communitas—you can’t manufacture fun, but you can put your group in position to have fun.

7. I will have a kingdom cause.

If you put together a sci-fi movie-watching group for fun, go for it! But do more. Be missional. Find others outside the church who like sci-fi, and invite them to come and talk about it. Camping, rebuilding cars, poetry—there’s all sorts of “themed” small groups out there that are begging for outreach to happen. Do something you love, and expand the kingdom through building relationships with others who are unchurched, quit going to church or attend another church.

Small-group ministry isn’t easy. It’s foreign to many people. And yet, in a society where we have global information at our fingertips, we don’t even know the people next door or the ones who sit next to us in service. Although it seems as if small groups are against the social norm, there is a tremendous heart-cry for people who long to be connected. They long to be real with others.

I know these breadcrumbs of information are hardly a meal, but it’s my prayer that some of these resolutions stick with you. There’s never a guarantee that a small group will work, but I know this: God commanded us to love him and love others. I hope these items, at the very least, point us in the right direction to do that. Have a blessed year!.