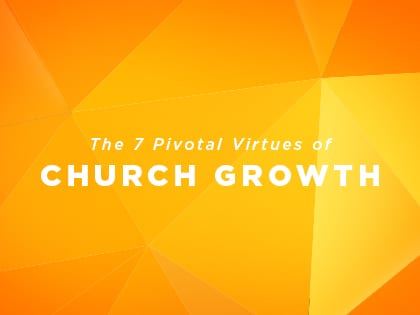 “It is next to impossible to grow the church without loving those outside the church.”

“According to (the) longer scheme, there are seven ‘virtues.’ Four of them are called ‘Cardinal’ virtues, and the remaining three are called ‘Theological’ virtues. The ‘Cardinal’ ones are those, which all civilized people recognize … : ‘Prudence, Temperance, Courage and Justice.’ The ‘Theological’ are those, which, as a rule, only Christians know about … ‘Love (Charity), Hope and Faith, as defined by St. Paul (who placed love as the greatest of them all).’ … The word ‘cardinal’ has nothing to do with “Cardinals” in the Roman Church. It comes from a Latin word meaning ‘the hinge of a door.’ These were called ‘cardinal’ virtues because they are, as we should say, ‘pivotal.’”

Let’s take a look at these seven virtues in the context of growing the local church.

Here is where the gift of administration is needed. A growing church must have a wise business administrator. It may need to be a chief hire. If prudence can be measured, it is by the use of finances. Prudence counts the cost.

“For which of you, intending to build a tower, does not sit down first and count the cost, whether he has enough to finish it—lest, after he has laid the foundation, and is not able to finish, all who see it begin to mock him, saying, ‘This man began to build and was not able to finish’?” (Luke 14:28-30)

The management of the church by good habits. Temperance is the maintaining of a constant right behavior—balance with no extremes. Lewis says that it is “not abstaining, but going the right length and no further.” It does not chase every new church fad.

“No longer tossed to and fro and carried about with every wind of doctrine, by the trickery of men, in the cunning craftiness of deceitful plotting.” (Eph. 4:14)

The uncompromising meekness of the church. Lewis says, “Courage is not simply one of the virtues but the form of every virtue at the testing point, which means at the point of highest reality.”

Courage is not “rushing in where angels fear to tread.” Nor is it standing on the traditions of the church. It is an uncompromising commitment to the Word of God, not arrogantly, but in humility.

[Tradition or sacred cow: rethinking how we “do church”]

“But sanctify the Lord God in your hearts, and always be ready to give a defense to everyone who asks you a reason for the hope that is in you, with meekness and fear.” (1 Pet. 3:15)

The equitable relationships of and in the church. Justice goes beyond fairness. It is treating people and entities rightly.

Give honor to whom it is due, not being a respecter of persons. It is the rightly judging of things, events, and doings without judging people. The church is to be the place where it is noted: “Behold the proud, his soul is not upright in him; but the just shall live by his faith.” (Hab. 2:4)

The mode of the church. Faith goes beyond simply believing that what we are doing is right. We know that faith must have an object, and that object is Christ. It is not faith in a denomination, faith in a congregation or faith in a pastor; it must be directed to Christ alone. The message of the church is to compel faith in Christ: the believing and trusting and obeying of his gospel.

The vision of the church. Hope is the desire for something, together with the expectation of obtaining it. It supersedes positive thinking—it is right thinking, by trusting in God and his Word. Maybe the saddest words in the Scriptures are “no hope.” A church may recover from the loss of any virtue, except for this one. Hope, like faith, must have an object and that object remains Christ. Without hope, as without vision, the people perish.

The call of the church. If we get this virtue wrong, we nullify the rest. All the other virtues, as with the Law and the Prophets, hang on this.

From Outreach Magazine  Can Unity Do Damage?

The cardinal and theological virtues can and should be the hinge upon which the doors of church growth turn. But let us never forget that Christ is the true door. Therefore, let us make sure that we are attempting to enter in by the right door.

“Jesus said to them again, ‘Most assuredly, I say to you, I am the door of the sheep. All who ever came before Me are thieves and robbers, but the sheep did not hear them. I am the door. If anyone enters by Me, he will be saved, and will go in and out and find pasture. The thief does not come except to steal, to kill, and to destroy. I have come that they may have life, and that they may have it more abundantly.’” (John 10:7-10)