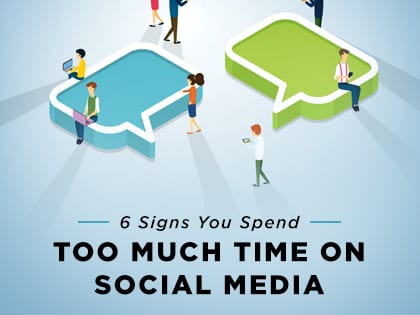 “I fear we irreparably harm our peace and joy when every moment becomes share-worthy.”

We are becoming a digital culture. Maybe we’re already there. I’m not sure. But I am sure this presents unique challenges. The digital shift is neither good nor bad; it just is. And we must learn to navigate this shift, not use it as a scapegoat.

The problems we face today are as old as Adam and Eve. Does social media amplify them? Probably. Make them more visible? Certainly. But are they unique to our generation? Not hardly.

The real problems rest underneath the surface. And if we’re serious about addressing them, we must dig deeper. Social media can have an equally negative effect on the soccer mom and the college student, the one-hour-a-day user and the nine-hour-a-day user.

Using time spent as a metric is little more than a quick answer to a deeper problem. Instead, we should look at habits, behaviors and perceptions. The negative effects of social media breed particular problems.

Here are a few. If any of the following points resonate, you probably spend too much time on social media.

1. You have a nagging sense that your life is “average,” and that’s not OK.

Sensing your life is average … that’s not the toxic part. When you think, “My average life is not OK,” you have the origins of something toxic.

In college, several of my professors graded on a curve. This curve said a few people fall in a percentile lower than their shoe size (5 or less), a few more in a percentile higher than their oldest living relative (95 or greater), and every one else falls in the middle.

Statisticians call those in the lowest and highest percentiles “outliers.” Because outliers skew results, they normally aren’t considered in analysis.

Social media, however, is built on outliers. The worst of the worst and the best of the best are most likely to show up on your timeline.

A few weeks ago, for example, my Twitter and Facebook feeds were littered with articles about a man who killed his girlfriend, stole her car and was now at large. I remember thinking during all this that social media gives someone with evil intentions an easy way to gain international fame.

In addition, we now have a celebrity as president. Earth can’t complete a full rotation on its axis without a new story about President Trump.

If you have a nagging sense that your life isn’t special because you haven’t committed a heinous crime or received the final rose on The Bachelor, you might be spending too much time on social media.

Almost everyone you know—99 percent or more, I would guess—lives in the middle. And that’s quite OK.

2. You have a lot of “friends,” but you still feel lonely.

A meaningful life needs a few necessary ingredients. Human connection is one. These connections are tiered based on intimacy—spouse being the most intimate, then kids and family, close friends, co-workers and your dog.

You don’t need every tier, but the fewer you have, the more incomplete you will feel.

[Four ways to be a light of the world on social media.]

Social media profiles don’t determine how many friends or followers you have. Those are just numbers, mostly padding for your ego. If you find yourself struggling with loneliness, ask yourself how many intimate relationships you have.

3. You can’t commit to anything because you’re afraid of missing something better.

Several years ago, this behavior was dubbed FOMO (fear of missing out). Today, I think it’s called normal. The source of its rise? Social media.

Jill is kickin’ it on the beach. Timmy is posing with the crew on a mission trip in Africa (#blessed). Everyone seems to be winning at this life thing—except for you, says social media.

Without some inner work, constantly checking your heart and aligning your decisions with your values, you end up playing the game. Rather than embracing the life in front of you, you hold out, waiting for the next experience so you can one-up Jill and Timmy.

This game is competitive, yet it has no winner. You can’t compete with your timeline, mostly because what you see is a facade.

If making decisions brings anxiety, you might spend too much time on social media.

4. You often say or do things you later regret.

One of my favorite books of all time is Victor Frankl’s Man’s Search for Meaning. In it, he says this:

“Between stimulus and response there is a space. In that space is our power to choose our response. In our response lies our growth and our freedom.”

From Outreach Magazine  Marriage: What If 'Differences' Are a Good Thing?

5. You have a low tolerance for people who don’t think like you.

Social media platforms want you to spend more time on their site, so they give you more of what you like. These platforms filter your feed based on previous likes, clicks, etc. In other words, social media pads your ego by strengthening your confirmation bias.

If you’re a hardline conservative, for example, chances are your feed won’t include posts about Black Lives Matter or knocks against President Trump. If you lean left, you won’t see posts supporting traditional marriage or travel bans on refugees.

And both sides said, “Amen.”

Yeah, except this doesn’t promote much tolerance, compassion or humility. If you’re a Christian, this is bad. This is one of the greatest challenges facing our generation.

How do we find common ground and come to the table with people who think differently than us?

6. You have no boundaries between personal and private moments.

I see Christians who post pictures about their alone time with God. While I’m not judging, I wonder about the motivation behind this? Some moments are too intimate for a timeline, too powerful to be contained in 140 characters (or less).

I fear we irreparably harm our peace and joy when every moment becomes share-worthy. Whether it’s lunch with a good friend, date night with your spouse or intimate time with God, we can’t fully embrace a moment while simultaneously trying to capture it. We also can’t embrace a moment when it’s interrupted with chirps and rings.

One of the greatest gifts you can give any one is your full attention. I suspect the most grateful, content among us understand this.

What are some other signs that someone spends too much time on social media?