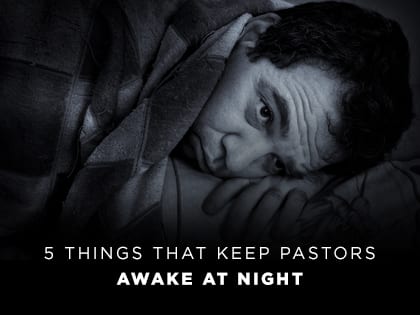 “Here’s a little secret you may not know: Every pastor takes every member departure personally.”

A recent cover story in the Harvard Business Review was titled, “What Really Keeps CEOs Awake at Night.” The article explored such things as brand building, executive pay and managing millennials.

It made me wonder about a similar question for my field: “What really keeps pastors awake at night?”

I travel a fair amount speaking at various pastors’ gatherings and, as a result, hear from a large cross section of pastors from across the country. I also am a pastor and have been for nearly 30 years.

So what does keep the majority of us up at night? At least five things, and I will offer them in ascending order.

As in lack of, raising of and stewarding of. I believe it was R.C. Sproul who once posed the question, “How much ministry can you do for $1?” The answer was, “One dollars’ worth.”

That may have been a bit crass, but you get his point.

But even crasser would be, “How much of an electric bill can you pay with $1?” Answer: “One dollar’s worth.”

And most pastors are the ones getting the bill and having the responsibility to make sure it’s paid.

So many pastors I know feel the stress of personal finances and corporate finances.

I know that many churches are singularly staffed, but a lot of churches have at least a few. That makes hiring and firing, training and managing, big deals.

[Three of the biggest misconceptions about being on church staff.]

But what keeps us up at night the most revolves around staff conflict. Not every church staff is healthy. Not every relationship is a good one. Anyone in the marketplace knows how stressful a bad working relationship with another employee can be. Imagine what it’s like in the confines of a church’s mission and ministry.

From Outreach Magazine  Having the Eyes of Your Heart Enlightened

Here’s a little secret you may not know: Every pastor takes every member departure personally.

We can’t help it.

Every pastor worth his or her salt treats and leads their church like a family. And they are the parent of that family. When someone leaves, it’s a knife in their relational hearts. It feels like disloyalty, abandonment and relational treason.

It doesn’t to the person departing. All too often (sadly) it’s a consumer decision, like switching from Costco to Sam’s Club. But not to the person who has invested his or her life in building that Costco.

No. 2: The Needs of Members

Most pastors genuinely care about the people they serve. They care about the marriages in crisis, the children who rebel, the cancer being treated and the grief over the loss of a loved one.

They come home at the end of a day prayerfully carrying the weight of many people’s lives, and it’s not easy to disengage. To be sure, being at the side of someone who just lost a son or daughter is nothing compared to what that mother or father is going through. But when you are at the side of grieving parents week in and week out, the toll is real.

And you lie awake at night overwhelmed at the depth of grief you’ve experienced.

No. 1: Feelings of Inadequacy

Yep, you read that right. Most pastors would tell you that they do not feel up to their task. They are only too aware of their sin and shortcomings. They are overwhelmed at a job that never ends, never has a 5 p.m. cut off, never has a finish line.

And then there’s that little thing called a “message.” Every week, weekends come along with amazing regularity. And pastors are expected to have something helpful, something fresh, something arresting and something encouraging. And too many times, they feel it’s all they can do to keep themselves afloat.

[Don’t ever say these 10 things to a pastor right after the sermon.]

Let’s be clear … almost every pastor I know would say it’s a privilege, an honor and the greatest joy of his or her life to serve in this role. I would add my name to that list. This isn’t about enabling collective whining or even engendering sympathy.

It’s just to say to other pastors, “You’re not alone in how you feel.”

And to say to the many attenders of the churches they serve, the next time you feel led to pray for your pastor, perhaps now you can pray for him or her a bit more specifically.