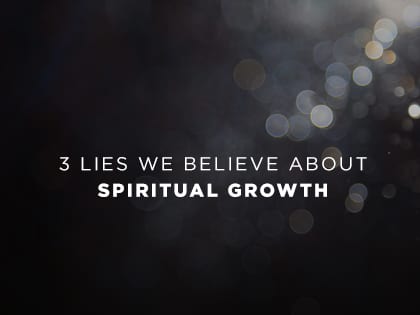 “Just like you can open a mutual fund but never invest in it, you can become a Christian yet never become a disciple.”

Studies show that we lie about 100 times per day. I know … not you … just that “average” person out there in hypothetical land. Many lies seem harmless:

And how many lies are fed to us beyond normal conversation? Branching out into all forms of media, the number climbs to 200 each day.

But how many do we believe? That may be the most intriguing question of all. So intriguing that I recently completed a series at our church called The Lies We Believe About Marriage.

Here were some of the lies we explored:

But what would fill out a series on the lies we believe about our spiritual lives and, specifically, spiritual growth?

Here are three that come to mind:

The comedian Yakov Smirnoff once joked that when he first came to the United States from Russia, he wasn’t prepared for the incredible variety of instant products available in American grocery stores. “On my first shopping trip, I saw powdered milk—you just add water and you get milk. Then I saw powdered orange juice—you just add water and you get orange juice. And then I saw baby powder—I thought to myself, ‘What a country!'”

The first misunderstanding about the nature of the spiritual life is that spirituality happens, instantly, at the moment you enter into a relationship with God. The belief is that when someone gives his or her life to Christ, there is an immediate, substantive, in-depth miraculous change in habits, attitudes and character. Just add God and you get a spiritual life!

To be sure, when you begin your relationship with God, your eternal destiny is altered, there is a radical reorientation of priorities, there is a new life purpose, and there is the power and work of God in your life. But rather than instant communion with God at the deepest of levels, there is the beginning of a new relationship that develops in intimacy over time.

And rather than the immediate liberation from every bad habit or character flaw you’ve ever possessed, what takes place is more like the landing of an army on the beachhead, which then begins routing out the enemy as it makes its way inland.

It is also a myth that true spirituality is merely a byproduct of time. Being a Christian does not automatically translate into becoming Christ-like. Someone who has been a Christian for five years will not necessarily have five years’ worth of spiritual maturity.

I first picked up the game of golf when I was in graduate school. I took all of two lessons from a course pro, bought a set of clubs and began to play. Initially I made excellent progress. But then I began to play with less and less frequency. Soon I only played at the annual Christmas gathering with my wife’s family.

As you might expect, I would play about the same each year (i.e., horribly) because I hadn’t played since the previous year. Recently, I have started to play with more regularity and my game has improved dramatically. But if someone were to ask me how long I’ve played, the answer would be deceiving. I could tell them I’ve played for more than three decades, but it wouldn’t mean anything because I haven’t been intentional about the game during that time.

People who have only been playing the game for a year, but who have developed their game through lessons and practice, could easily outplay me.
This is a crucial understanding: I can subscribe to golf magazines, purchase golf equipment, live by a golf course, wear golf clothing, watch golf on TV and hang out at the clubhouse and never improve my game!

Simply being exposed to something has little bearing on whether we become proficient at it. While your spirituality takes time, it is not simply a product of time.

Another misconception is that spiritual growth is gained by trying. The idea is that people must simply decide to be spiritual, because spiritual living is essentially an act of the will. Love, joy, peace, patience, kindness, goodness, faithfulness, gentleness and self-control are believed to be matters of effort. Yet, while spiritual development demands intentionality, merely trying to experience life change can never bring about life change.

Michael Jordan was arguably the greatest basketball player to ever play in the history of the National Basketball Association. A whole generation of basketball players grew up wanting to be “just like Mike.” They still do. And they try! Hard! But few come close to mirroring his level of play. Because you don’t play like Jordan by trying, you play to his level by training. And not just any training, but the training regimen he followed to play the way he played.

At the heart of Christian spirituality is to be like Jesus. And to be like Jesus you don’t try, either. You train. You do the things Jesus did in order to live like Jesus lived. That’s why Jesus once said that, “Everyone who is fully trained will be like his teacher” (Luke 6:40). And the apostle Paul wrote, “Train yourself to be godly” (1 Tim. 4:7).

The key to a spiritual life is to order your life around those activities, disciplines and practices that were modeled by Christ in order to accomplish through training what you cannot now do by trying.

Think of a mutual fund. You open the fund with an initial investment—say $1,000. If that is all you ever do, then the amount of growth in your mutual fund will be very minimal and very slow. It will take continued investments to make the fund move forward and begin to generate the kind of dividends and growth you desire.

Just like you can open a mutual fund but never invest in it, you can become a Christian yet never become a disciple. You can begin a spiritual life and then never develop it.

But only if we stop believing the lies.