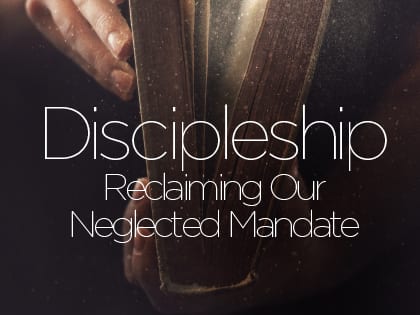 “Few pastors will actually say this, but the church is still largely geared up to generate numbers more than loving one another.”

Reflections by Preston Sprinkle as Told to Rob Wilkins

When Preston Sprinkle was first asked to write a book based on research by the Barna Group, he was only mildly interested. But the vice president of Eternity Bible College and New York Times best-selling author soon became intrigued with the focus: discipleship.

Besides, after co-authoring Erasing Hell with Francis Chan, he was up for another writing project.

In Go: Returning Discipleship to the Frontlines of Faith, Sprinkle said it was easy to summarize the research: The American church sucks at discipleship. He wishes he could tell you this in some polite way.

“The State of Discipleship”—the Barna research study commissioned in 2014 by the Navigators—concluded that the church’s methods of making disciples are broken. When 68 percent of Christians believe that the phrase “God helps those who help themselves” is biblical, you know you have a problem.

Buoyant by nature, Sprinkle wrestled through an initial depression to envision new ways for discipleship in the context of Barna’s findings. In writing Go, Sprinkle desired, more than anything, to point the body of Christ back to the real Jesus …

… the man who spent time with whores, gluttons, fornicators and thieves.

… the man who angered pretentious leaders of religion.

… the man whose love drove him to a cross.

During a conversation with Outreach, Sprinkle often said it’s easy to lose sight of such a savior.

There were some things in the study that kind of bothered me—like how we were even measuring discipleship. You know, like attending Bible studies or being part of a program or class. Is that what it means to be a Christian? You look at the Gospels; Jesus didn’t do any of this stuff. Do we forget that he was a revolutionary who told people things like, “Eat my flesh,” and, “Pick up your electric chair”? For the last few years I have been trying to lead people back to who Jesus was and is, and I feel we have often created him in our own modern image.

In our highly individualized and performance-driven, American-Dream culture, we have all the toys and sports and technology and busyness. It’s funny that when people travel overseas, we are so blown away by the community. We say, “Whoa! They are so communal,” instead of saying, “Whoa! We are so individualistic.”

From Outreach Magazine  Why the Church of Tomorrow Starts Today

It’s like a perfect storm: We don’t identify ways that the American Dream affects the process of discipleship, because we can’t see the hurdles. The first step is recognition, because it gives us permission to challenge the system and go back to the drawing board.

When Constantine became a Christian, he kind of sucked the life out of church. When the church moves from a position of suffering to power, that’s usually not good. The American church has gone from a position of power and we are trying to learn what it means to be in a position of suffering. We are in this weird transitory space. A few decades ago, the church was popular and had plenty of money. Our culture has taken a swift turn against the church. It has the potential to provide exciting opportunities in a difficult and trying time, because in suffering, the church has a history of thriving.

When people think about being discipled, they immediately go to different departments: I need to get in a Bible study; I need to be more faithful in my devotion; I need to attend church more—rather than seeing the rhythm of life being more gospel-centered.

I know several pastors who are frustrated because they can’t get more people involved in church programs, which aren’t inherently bad at all, but for some people, more involvement in more programs will be a hindrance to kingdom work.

From Outreach Magazine  5 Strategic Questions for the New Year

I can see why some of these high-powered businessmen are saying, “I’m not going to sit in a Bible study and talk about Rick Warren.” They have these massive things going on, and a lot of them are genuine kingdom adventures. The thought of getting plugged in to a new church program just doesn’t excite them.

The church’s focus needs to change from getting more people in the church to empowering our people to move out in mission together.

Jonathan Dodson writes on the effects of individualism in the church. He concludes we have a “one-third gospel”—largely focused on a personal relationship with Jesus. But the biblical gospel is much more than personal. Dodson believes it has two more “thirds”—it calls us into community and on to mission.

How do we change? The starting—and finishing point—is grace. There is so much performance-driven Christianity that just goes unconscious. We use the right words to talk about grace, but functionally we don’t operate out of it.

I know so many people whose No. 1 hindrance is they don’t believe God can forgive—let alone delight in them—when they are messing up. Performance-driven Christianity is like running on sugar: You go, go, go, but when you don’t have the meat and substance of the gospel, you are going to crash. God’s graceful and loving pursuit of us has to be the lifeblood of discipleship.

Grace liberates you to be more honest, open and transparent with your struggles. A performance-driven faith lifts up a standard you cannot attain, so you fabricate spirituality and hide your faults. You end up spackling over the real brokenness that’s inside of you. Pretension kills change.