Home Features The Greatest Measure of Your Church’s Health: Giving 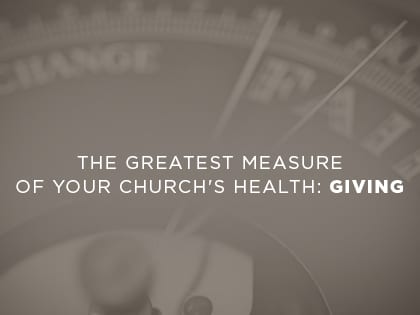 “When people in your church stop giving, it is seldom, if ever, about the money.”

“Whosoever will may come.” That was our motto from day one of our church plant (nearly 30 years later, that motto remains). We grew quickly in numbers but lacked greatly in ministry. It was our fifth year and the numbers had reached nearly 600, but it was merely a crowd and not a congregation.

To be considered a member, one had to have made a profession of faith in Christ and been baptized. We were in the height of growth when we (the leaders) decided to cancel all membership (still welcoming the “whosoevers” to attend), but changing the requirements for membership. The new conditions for membership remained salvation and baptism, but two additional requirements were added: Every member had to have a ministry, and every member had to tithe.

We lost 100 people that week. It was not the newer converts that went elsewhere, but the older church transferees (the perpetual disgruntled) that left in a huff. I expected the reverse. I panicked; I was sure that the older, seasoned church attendees were the core of our givers. I asked our administrator to check the giving records so that I would know what to expect financially. Our facility rent alone was over $40,000 with numerous other expenses. We could not afford a loss in revenue. We were operating at the breakeven point.

I will never forget the moment she, our administrator, walked into my office with the verdict. The look on her face was troubling. I expected the worst. She said that the average giving was $15 per week. I immediately did the math; that’s $1,500 per week, over $6,000 per month. I thought, “We’re in trouble.” She then said something that astounded me and forever changed my church-culture thinking. She said, “No, Pastor, the amount of giving by those who left was $15.00 total per week.” We didn’t lose 100 church members; we gained 100 additional seats.

Here are the things that I have learned from that point and over the years with regard to tithing and giving in the church:

There is no greater way to know the condition of the flock than by their giving. When people stop giving, it is seldom, if ever, about the money. If it were a loss of a job, etc. their giving might decrease, but not stop. Givers, I have found, are accountable folks.

There is a need to read the barometric pressure weekly. To this day, I received two reports the first thing every Monday: attendance and giving. Yes, it’s all about the numbers, but only when we realize that those numbers are people. Every week I would check the attendance in every realm, from the choir to the nursery.

From Outreach Magazine  7 Ways to Connect With Single-Parent Families

Some would say that giving is between the giver and God. So is life, and so is sin. However, is not our goal in ministry the transformation of people from the things of this world to the righteousness of Christ? To whom are we to give an account of our stewardship if not the biblical overseers (if we’re not accountable to man we’ll not likely be accountable to God)?

Here are the things that I looked at closely and to which I responded every week: new givers, top givers and lapsed givers. Here’s how and why:

These are new people who have decided to, at least, see the church as worthy of their giving. They should be sought out as potential new members. Often the giving of people is the only way to know that they are there.

In many—if not most—churches, top givers give 80 percent of the offerings (the percentage may vary slightly). If there was an exceptional amount given above one’s normal giving, I would personally contact that person or family and thank them. I believe that there are folks whom God gifts as givers, as there are folks whom God gifts with various talents and whom we thank for the use of those talents. When a person performs a special song, testimony, etc., we are quick to show our appreciation … why not those with the gift of giving?

Like top givers, lapsed givers are of great importance. I see this as a cry for help. If the pastor is not monitoring the giving, they don’t hear that cry for help and the parishioner feels that the pastor doesn’t even care that they are hurting, which further exacerbates the problem. A call or a visit simply asking, “Hey, how are you doing; is everything alright?” is needed.

May I add: If staff, deacons, elders, board members, etc., are ever listed in the lapsed category, they should receive immediate attention. It’s unfair to expect your congregation to give when your staff doesn’t give.

I know that there are many folks, even pastors, who believe that tithing is just an Old Testament law, a tax for the nation of Israel. I beg to differ strongly. The tithe was, is and will always be a grace issue. Was it a law for the Jews? Yes. That does not negate the grace of the tithe and all giving.

Allow me to give a quick Bible reference for consideration: We know that Abraham paid tithes. Was that not prior to the giving of the law (400-plus years)? Therefore, consider, “The law, which was four hundred and thirty years later, cannot annul the covenant that was confirmed before by God in Christ, that it should make the promise of no effect. For if the inheritance is of the law, it is no longer of promise; but God gave it to Abraham by promise” (Gal. 4:17-18).

Every true church has two things in common: They have the Word of God and the Spirit of God; both, God supplies. The resources to do the will of God always come from his people, the church (the tithe and the offerings). Therefore, give clear, frequent and great attention to receiving the tihes and offerings of God’s people. Consider:

As lead or senior pastor, be the one who receives the tithe and offerings. Give great attention in doing so. Do not receive them by rote. Receive them with sincerity of heart and the passion they deserve. Don’t wing it—prepare for it.

Do not mix the receiving of the tithe and offerings with other announcements (birthday, anniversary wishes, etc.). Likewise, don’t mix praying for the sick, the nation or any other need; make giving a clear and focused part of worship.

Two things I have always attempted to include in every message, either openly or by way of applicable illustration: evangelism and giving.

A few things you may further wish to consider: mailing out offering envelopes to members, online giving, an electronic giving kiosk in the foyer, a proven capital-stewardship campaign, and a legacy giving program. (I personally do not care for “fundraisers.”)

Read the barometer; know the state of the flock. One sermon, one series or casual references to the tithe and offerings is inadequate. That’s why there are four Gospels … once is not enough. Let us “pay careful attention to the condition of your flocks, giv[ing] careful attention to your herds …” (Prov. 27:23 NAT)