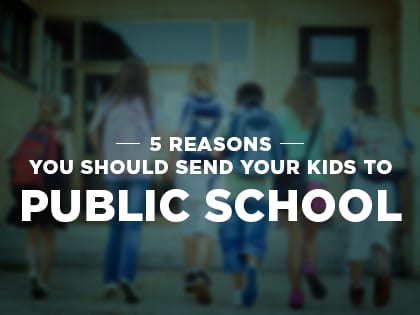 “If we remove all the Christian kids from public schools, who will influence the remaining kids for Christ?”

Recently, a friend asked why we’ve never sent our children to Christian schools. She and her husband are weighing whether or not to send their daughter to a Christian elementary school, and since I’m asked this question a lot I thought I would share my response.

Before we sent our oldest child to kindergarten, my wife and I made the decision that we would send our daughters to K-12 public schools, and then upon high school graduation send them to private Christian colleges.

I’ll share why we made that decision, but I first want to say that when we talk with parents at our church (we get asked this a lot since I’m a pastor and my wife is the principal of a public elementary school in our area), we always say that we encourage parents to do what is best for their child. Each child is unique, just as the schools in which a family lives are unique, and there is no “one size fits all” approach for making this decision. We are for whatever works best for your child—whether it’s a Christian school or a public school.

That said, if all options seem equal, we have always been strong advocates for Christians to send their children to their local public school.

Here are five reasons why:

In a nutshell, a school is teacher teaching students. And it’s not a well-kept secret that many Christian schools hire teachers who couldn’t get jobs at public schools. Of course, there are many, many exceptions, such as the incredible Christian school that my niece and nephew attended, where my sister teaches. That school is a premier academic institution. But that’s the outlier. The teaching staff there could get jobs at the finest schools anywhere, but they teach in a Christian school because of a deep sense of mission.

While the average teacher at a Christian school will also say they teach out of a sense mission, the fact is that they may have ended up there because (a) they couldn’t pass the state certification tests required to teach in a public school and/or (b) they didn’t have the interview chops to pass through the rounds and rounds of interviews to land a public-school job.

After the teachers, the second aspect of what makes up a school is funding. Simply put, public schools tax the area’s residents for their funding. Christian schools charge tuition and barrage the parents of the students for extra money through annual fundraisers. Christian schools frequently struggle with funding, and as a result have lower paid teachers (which affects their ability to attract the best talent) and poorer quality buildings, as well as fewer labs, computers, excursions, clubs and sports teams. Some Christian schools make up for poor facilities by forging partnerships with local churches, but they’re most often relegated to taking over substandard buildings that were sold years ago by their local public school system.

The old saying, “First we build our buildings, then our buildings build us” is applicable here. Mediocre school facilities and programs precipitated by poor funding affects everything about a school. Fortunately, some Christian schools find a way to escape this trap.

From Outreach Magazine  Teens Spend 9 Hours a Day Doing What?

3. Both have “problem kids” and “negative influences.”

The third aspect of what makes up a school is your student’s peer group. A key part of the argument for sending your child to a Christian school is that you’ll help them avoid sex, drugs, alcohol, country music and atheism by surrounding them with Christian teachers and Christian peers. That seems like a strong argument, but my experience has been that if your kids are actively involved in a strong church, and you—as his or her parents—are committed followers of Jesus, your child has as much a chance of avoiding these traps in a public school as a Christian one.

Another poorly-kept secret is that Christian schools are a niche for rehabilitating kids with behavioral problems, but they are tasked with doing so without the massive academic, psychological and pedagogical teams of people in your local public school. That’s a recipe for unhealthy classroom dynamics in some small Christian schools.

One important reason not to send your child to certain Christian schools is because many are run by really creepy fundamentalist Christians who detest science and won’t allow their kids to listen to satanic music like the Jonas Brothers. For instance, there’s a large church down the street that has a Christian school where parents have to sign a document that states they will allow their children to be spanked, because, according to their manual (which a former parent shared with me), “‘To spare the rod is to spoil the child’ (Prov. 13:24).”

Simply put, you don’t want your children educated by fundamentalist Christians who use dumbed-down curriculum riddled with false science and legalistic babbling. They produce cult-like, fear-based school cultures that do so much long-term harm to the children under their care that their existence should be illegal. Of course not all Christian schools are like this, but you have to be very careful and ask the right questions.

From Outreach Magazine  The Astonishing Power of Microchurches—and You

As I stated earlier, the path we’ve agreed upon as parents is to send our kids to public K-12 schools and then to send them to Christian colleges. That’s because we want our children’s worldviews to be shaped for evangelism, and our experience is that happens before they turn 18, not afterward. Cloistering kids into an evangelical subculture where they are taught by Christian teachers and surrounded by other Christian kids doesn’t force them to live brave, evangelistically passionate lives. Of course that can happen in a Christian school in a limited way. It’s not impossible. But I want my kids to grow up reaching their friends for Christ.

If we remove all the Christian kids from public schools, who will influence the remaining kids for Christ? And their families? For example, my middle daughter just graduated from high school. She attended public school her entire life. There are at least a dozen families that attend our church because of my daughter’s influence. She led many of her peers to Christ, some who are now attending Christian colleges. The long-term impact of my daughter’s light in public school is having eternal consequences. It’s been our privilege as parents to watch this unfold, year after year, starting in kindergarten. She now attends a fantastic Christian college where she is being mentored by some of the finest hearts and minds in the Christian community.

Do What’s Best For Your Child

Now, to be honest, we live in an affluent suburban area. The school buildings are new, the tax base is strong and everything about the school district is done with excellence. If we lived in the kind of area where a few of my friends live—places where they worry about their children’s safety and there are drug pushers on every corner—I think we’d seriously rethink our strategy.

I hope this gives you a better understanding of what led us to make the decisions that we did. Like I said, every child is unique, and we want you to do what’s best for your children, period. A Christian school may be your best option. I just hope that I’ve shed a little light on why public school may also be a really good option, as well.