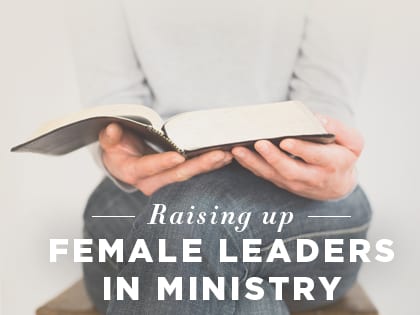 Ed Stetzer: “Don’t forget the emerging female leaders around you—find them, encourage them, raise them up.”

Too often, we can miss the gifts of others. That’s human nature, I guess. The fact is, God has gifted all his people, and the work of Christ is benefited when we acknowledge and engage different people and their unique gifts.

Mentoring is about finding and developing the giftings of others. According to our internal demographics at Outreach magazine, our readers are primarily pastors of one sort or another—and the majority are male.

So, in this issue on mentoring, I want to encourage you to not overlook a group that is probably different than you—women leaders. A couple of years ago I launched a women’s mentoring and networking group at LifeWay, where I worked until just recently.

Here are some general principles that we operated under:

When you work in an evangelical context, you need a solid understanding of theology, particularly as new ideas emerge. As such, we focused on mission, gospel-centered ministry, theological integrity and much more.

It is a pretty common understanding that, in some ways, women and men lead differently. We brought in Selma Wilson who, at the time, was president of B&H Publishing—and the only woman leading a top-10 Christian publishing house—to speak into some of those issues. I knew I could not help with some leadership questions since my perspective was limited, so it was important to bring someone in who could speak personally into those topics. And Selma is one of the best leaders I have met, period. Having her insight was invaluable.

Books like Lean In: Women, Work, and the Will to Lead by Sheryl Sandberg explain that it’s important to find ways to connect. The participants were there to learn from each other and to give professional support. As much as I wanted to encourage them, I wanted them to practice the regular encouragement of others.

From Outreach Magazine  Fellow Christians, It's Time to Speak up for Refugees

The Purpose of Power

The obvious question is: Why? Why does a man seek to encourage a group of women leaders? Well, I think I was influenced to do so by Andy Crouch and his article on power in Christianity Today, in which he said: “Power is not given to benefit those who hold it. It is given for the flourishing of individuals, peoples and the cosmos itself. … Power is not the opposite of servanthood. Rather, servanthood, ensuring the flourishing of others, is the very purpose of power.”

I recognize that I’ve had a certain amount of “power” in my professional roles, and perhaps in opportunities to influence, as well. Power, Crouch asserts, is neither good nor bad—power is neutral. However, I was reminded and challenged by Crouch’s article that we should use the power we do have to empower others.

It’s easy when you are in a position of leadership to only think about your own goals, and to assume others are only there to help you achieve them. That’s a mistake. Leading also involves helping people develop their own gifts—and if you do your job well, they will grow to flourish on their own. Because even the best leaders are sinful and can get easily distracted by their own interests. This kind of investment has to be deliberate.

Long story short: When we have “power” (as Andy helped me to define it more clearly), we should empower others. And, in the church world, I think that we can (and should) be sure that includes the gifted women around us.

By the way, this idea for a networking group came from a conversation with Lizette Beard, LifeWay Research project manager, and Carol Pipes, editor of our Facts and Trends magazine. They pointed out that it is easy for women to be left out of the conversations and opportunities in ministry—so we decided to create some of our own conversations and opportunities. I talked to Amy Whitfield, formerly part of my team and now director of communications at Southeastern Seminary, and then plunged in with a group. Obviously, I was enriched by the experience.

It might be different where you are, but my suggestion is simple: Don’t forget the emerging female leaders around you—find them, encourage them, use your privilege and influence to raise them up. Don’t miss out on the gifts that half of the body of Christ has to offer. As an Outreach magazine reader, and, therefore, most likely a male pastor, you will have to be intentional—and I hope you will be. Half the kingdom of God is a whole lot to leave behind.