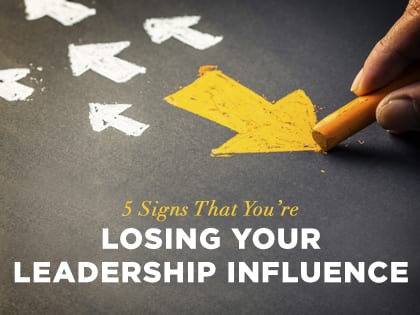 “Losing influence doesn’t happen overnight. It slowly leaks away from leaders who aren’t paying attention to the warning signs.”

Leadership is about influence. After all, if you can’t inspire and influence your team to accomplish your church’s purpose, then you won’t get very far. But over the years, I’ve seen plenty of leaders lose that influence¬—and yet don’t recognize when it starts slipping away.

1. You feel the need to remind staff about your title or your experience.

This is an insecure leader who has a seemingly insatiable need to prove him or herself. This leader is constantly “reminding” their employees and staff that he or she in charge. The only problem is that if you have to remind people that you’re in charge, then you’re not in charge. It’s as simple as that.

In this case, employees understand the chain of command, but don’t respect it. They still need the leader to sign off on policies, permission, sick leave, etc. But they don’t ask the leader’s advice on new ideas, personal questions or anything else that really matters. If it’s been too long since a member of your team asked your personal advice on a project or other decision, then you’re looking at a big red flag.

3. You have to raise your voice.

Emotional outbursts happen—especially when pressure hits. But when leaders yell at team members, they’re broadcasting to everyone in the room that they’ve lost control and have no other ideas. Yelling at team members is the quickest way to undercut your authority. So don’t do it. Ever.

From Outreach Magazine  Renewing Our Spiritual Focus in the New Year

4. You listen less and talk more.

Great leaders know how to listen. They want to understand how the team feels, its potential and where they are on projects. Team members want to be heard and understood. When a leader stops listening, they cut themselves off from their own lifeline. When leaders replace listening with talking, they start believing their own press, and that’s when they get in trouble.

5. When problems happen, you blame everyone but yourself.

It’s always someone else’s fault. But great leaders take responsibility—even when the failure isn’t their fault. Taking responsibility creates loyalty, and inspires your team because they understand that you value them enough to take the bullet.

Have you ever worked with leaders who lost influence without realizing it?