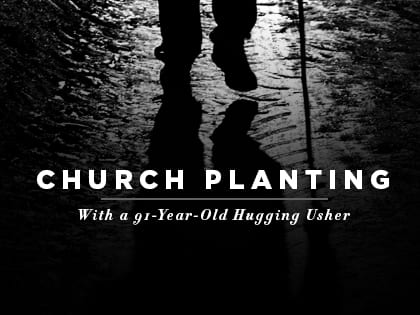 “One person who was excited about seeing new generations come to know Jesus was a 91-year-old woman named Ruth.”

Many years ago, I sat in my car on the side of the road, a sense of dread overcoming me regarding my decision to be part of a church plant.

I was in a secure role at a large church, and leaving that for an unknown venture began to affect my emotions. But as fast as the fear came over me, it dissipated as I looked down the street I was parked on.

There were a flood of people walking around, many of them university students. Although this church plant was going to be a multi-generational one, we wanted to locate to the other side of town from our launching church to be near the university. In our county, there was and still is a very high percentage of young people who are not part of any church.

The more I remembered why we were planting this church, the more my fear lessened. As I thought about young people coming to know Jesus, I knew that it was going to take risk, change and doing things in new ways. And I became more comfortable with that idea.

As we searched for a building for our church plant, we were invited to partner with a predominantly older-generation church. It was very traditional and small. But their building was in a great location and their leadership wanted to see it used for God’s mission. The building was mostly unused during the week, so this was a way to steward what God had given them as well as help us start our church plant.

As we moved in and began doing ministry together, we quickly learned about some of the value differences that commonly exist between older and younger generations when it comes to décor, musical style and those type of things.

But one person who was excited about the church plant and seeing new generations come to know Jesus was a 91-year-old woman named Ruth.

Ruth wasn’t shy about sharing that she preferred a traditional style of church. But every Sunday, she would stand at the front door of our church, handing out bulletins. She would beam at the sight of new people coming into her church building, and like a tollbooth, everyone had to give her the payment of a hug to get through the door. I’d see her bring joy and smiles to the people coming in, and she would then sit in the front row to cheer us on and encourage us.

At age 98, Ruth went to be with Jesus, and I had two sweet meetings with her while she was in hospice. During the first one, she lay there and looked right at me and said, “Life went by so fast.” The next time I saw her, I read a Psalm to her and prayed with her. As I was saying goodbye, she lit up and looked at me and said, “I’ll see you forever!” indicating she knew this life was not the end, but we would be with Jesus one day for eternity. That was the last time I saw her.

At Ruth’s memorial, I listened to one person after another share how Ruth had made an impact in their lives. It was clear that all throughout her life, she had a heart for young people: inviting them over after school, listening to their problems and representing Jesus to them.

I can’t imagine the church plant without Ruth now. She wasn’t on the original core team, but she did play a very important part in our church life. Our team had many talks about style of music and how each generation has different approaches to how they learn, define community and worship—but one of the most important things I learned was that as I age and get older, I want to be like Ruth.

One day I want to be there for church planters and other church leaders, taking risks and being on mission to reach future generations. I want to be like Ruth, encouraging the leadership to carry on with the mission, even if my preferred style of worship is out of date. As long as the gospel is taught and lives are being changed, I will be there like to do whatever I can to help, just like Ruth.

If you are a church planter, you are most likely targeting new generations or young families in a growing area. But do whatever you can to find the Ruths in your community. It’s a wonderful thing have people from older generations in your midst and cheering you on. Young people need to hear faith stories from those who are older and interact with people who have walked with Jesus for years and years and years.

And for those who are older, who may not understand some of the methods of younger churches—don’t give up on them. Keep your mind open. They are likely doing what they are doing because they care about sharing the gospel with a generation that is far from God. As Ruth said, “Life goes by so fast.” Instead of complaining or wishing for the “good old days,” what if you isat in the front row and cheered on those who are leading? You are so essential to church plants and the church at large, especially the churches that reaching young people.

As I sat at Ruth’s memorial recently, I wondered if she ever thought she’d be part of a church plant at age 91. Either way, I thank God he that he brought her into our community and lives.

Dan Kimball serves on the staff of Vintage Faith Baptist Church in Santa Cruz, California, and is professor of missional leadership at George Fox University.