Home Features When Ministry Knocks You Down, How to Get Back Up 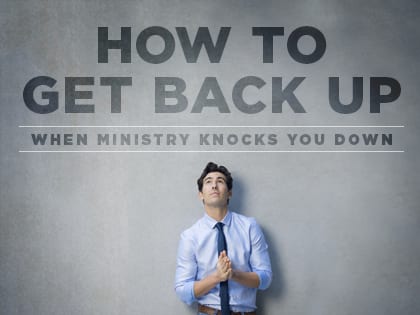 “As I’ve faced discouragement in ministry, these simple choices have helped me encourage myself in the Lord.”

If you’re a pastor or a missionary or serve in a church, you can’t avoid discouragement, disappointment and hurt from ministry. The Bible even uses the not-so-complimentary description of “sheep” to describe those we serve. And sheep get dirty and smelly and often kick and bite. Sometimes those sheep in the church do the same to their shepherds.

So when you get kicked, forgotten, disrespected, ignored, mistreated, gossiped about or misunderstood, how do you move forward?

The story recorded in 1 Samuel 30 gives great insight. David had just begun his career to fight the bad guys. Early on he faced a huge defeat. While he and his
army were in battle far from home, the bad guys—the Amalekites—attacked the city where his family and the families of his army lived. They burned the city and kidnapped their wives and children. When David’s men discovered this, they considered removing him from his position, not by a vote of a board or a congregation, but with big rocks to the head by stoning.

The Scriptures then record one of the most beautiful verses every written. The old King James Version captures it well.

It worked because his guys didn’t stone him, but instead marshaled their energy and once again pursued the bad guys under David’s leadership.

As I’ve faced discouragement in ministry, these simple choices have helped me encourage myself in the Lord.

1. Acknowledge your pain and emotion to the Lord, but don’t wallow in it. Neuroscientists have discovered that when we name our emotions, it turns down the volume in our brain’s emotional centers.

2. Journal your thoughts. Writing my thoughts down down helps me stop the tendency to incessantly mull over the hurtful situation. Writing therapy been scientifically proven to help us process pain.

From Outreach Magazine  Jared C. Wilson: The Danger of Pragmatism—Part 2

3. Read God’s Word, especially those verses that speak of hope and victory. Every time you read the Bible, you are actually reconfiguring the circuits in your brain and reinforcing Biblical values and truth.

4. Do something proactive. Take action to move forward. In David’s case he took specific action to resolve the problem. He rallied his troops to chase down the Amalekites.

5. Stop condemning yourself and remind yourself that you are a child of God, loved by him with great intrinsic value regardless of whether your church is growing or whether people treat you with respect.

6. Pray for those who have hurt you. I’m amazed how God defuses looming bitterness in my heart when I pray for the sheep that bite me.

How have you dealt with your ministry pain?