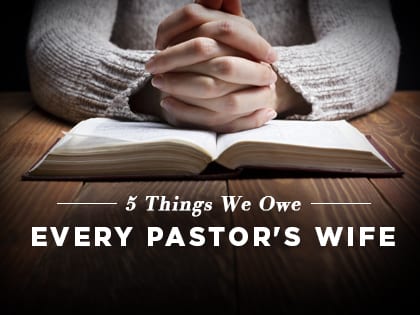 “The pastor’s wife can be hurt in a hundred ways. Her pain is magnified by one great reality: She cannot fight back.”

Everyone who walks in the church door can be helped or hurt in what happens during the next hour. Whether saint or sinner, preacher or pew-sitter, old timer or newcomer, child or geezer—everyone is vulnerable and should be treated respectfully, faithfully, carefully.

But no one in the church family is more vulnerable than the pastor’s wife.

She is the key figure in the life of the pastor and plays the biggest role in his success or failure.

(Note: I am fully aware that in some churches the pastor is a woman. In such cases, what follows would hardly pertain to her household.)

And yet, many churches treat her as an unpaid employee, an uncalled assistant pastor, an always-available office volunteer, a biblical expert and a psychological whiz.

She is almost always a reliable helper as well as an under-appreciated servant.

You might not think so, but she is the most vulnerable person in the building. That is to say, she is the single most likely person to become the victim of malicious gossip, sneaky innuendo, impossible expectations and pastoral frustrations.

The pastor’s wife can be hurt in a hundred ways—through attacks on her husband, her children, herself. Her pain is magnified by one great reality: She cannot fight back.

She cannot give a certain member a piece of her mind for criticizing the pastor’s children, cannot straighten out the deacon who is making life miserable for her husband, cannot stand up to the finance committee who, once again, failed to approve a needed raise, or the building and grounds committee that postponed repair work on the parsonage.

She has to take it in silence, most of the time.

It takes the best Christian in the church to be a pastor’s wife and pull it off. And that’s the problem: In most cases, she’s pretty much the same kind of Christian as everyone else. When the enemy attacks, she bleeds.

The pastor’s wife has no say in how the church is run and receives no pay, yet she has a lot to do with whether her husband gets called to that church and succeeds once he arrives.

That’s why I counsel pastors to include a photo of their family with their resume. The search committee will want to see the entire family, particularly the pastor’s wife, and will try to envision whether they would “fit” in “our” church.

The pastor’s wife occupies no official position, was not the object of a church vote and gives no regular reports to the congregation on anything. And yet, no one person in the church is more influential in making the pastor a success—or a resounding failure—than she.

She is the object of a world of expectations …

She is expected to dress modestly and attractively, well enough but not overly ornate.

She is expected to be the perfect mother, raising disciplined children who are models of well-behaved offspring for the other families, to be her husband’s biggest supporter and prayer warrior, and to attend all the church functions faithfully and, of course, bring a great casserole.

Since her husband is subject to being called away from home at all hours, she is expected to understand this and have worked it out with the Lord from the time of her marriage—if not from the moment of her salvation—and to have no problem with it. If she complains about his being called out, she can expect no sympathy from the members. If she does voice her frustrations, what she hears is, “This is why we pay him the big salary,” and, “You married a preacher; what did you expect?”

She is expected to run her household well on the limited funds the church can pay and keep her family looking like a million bucks.

And those are just for starters!

The pastor’s children likewise suffer in silence as they share their daddy with hundreds of church members, each of whom feel they own a piece of him, and can do little about it. (But, that’s another article.)

Here are five things we owe every pastor’s wife.

1. We owe her the right to be herself.

She is our sister in Christ and accountable to him.

My wife was blessed to have followed pastors’ wives who cut their own path. So, in some churches, Margaret taught Sunday school and came to the woman’s missionary meetings. In other churches, she directed the drama team and ran television cameras. A few times, she held weekday jobs while raising three pretty terrific kids.

And, as far as I know, the churches were always supportive and understanding. We were blessed.

Allow the pastor’s wife to serve in whatever areas she’s gifted in. Allow her to try different things, and to grow. But do not put your expectations on her, if at all possible.